Glenn Reitmeier is known worldwide in the television technology community as an industry thought leader and a leading visionary, creator and architect of digital television (ATSC 1.0 and 3.0). 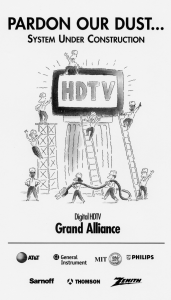 April 10, 2020 marks the 25th anniversary of the Digital HDTV Grand Alliance system’s world premiere at the 1995 NAB Show. To commemorate the occasion, I’m releasing some never-before-seen recordings of the Grand Alliance’s first demonstration and press conference, which NAB has very graciously agreed to publicize here. Unfortunately — and somewhat ironically — the video quality of these recordings is very poor, having been shot on an 8mm analog camcorder in a darkened room. Worse yet, the tape deteriorated and some portions were simply unrecoverable. But I’ve done my best to restore what I could, which to the best of my knowledge is the only existing record of the events. (If anyone else out there has a recording, please let me know.)

By the 1994 NAB Show, the Grand Alliance’s theme was “Pardon Our Dust – System Under Construction.” Many skeptics doubted the former competitors that had formed the Alliance the previous year could collaborate effectively to produce any result at all. Other doubted that any jointly produced system could be better than all of its predecessors in every respect. And still others doubted that a digital approach could ever achieve the required performance and cost-effectiveness to become practical for broadcasting and consumer electronics applications. Recall that it was indeed the digital stone age — computer monitors were 640 x 480 and 16 colors; PCs ran DOS; internet access was via 19.2 kbps dial-up modems, HTML 1.0 was only for simple hypertext linking of text pages and cell phones were analog. Those Grand Alliance kooks thought that broadcast TV could achieve five times the display resolution and a million times more colors than computer monitors of the day, with data transmission a thousand times faster than computer modems. 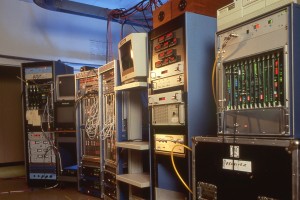 By early 1995, the Grand Alliance was behind schedule. Prototype hardware subsystems built by Grand Alliance members AT&T, General Instrument, Philips, Sarnoff Labs, Thomson and Zenith were being integrated at Sarnoff, but it was a painstaking process. There was no test equipment — just software simulations that ran on high-performance workstation clusters, logic analyzers and oscilloscopes. Yes, back in the day…

Against that backdrop, it was an incredible milestone when the Grand Alliance announced the completion of its prototype system and delivered it for testing on March 31, 1995. The previous day, Grand Alliance members had gathered to review the prototype’s performance and reach a final “go / no-go” decision. Here is a behind-the-scenes look at the completion of system integration on March 30, 1995:

But wait, there’s more! A second prototype system had been constructed as a spare, and it was shipped to Las Vegas for a world premiere to the industry at the 1995 NAB Show.  On April 10, 1995, the skeptics were stunned to see the first digital television pictures — and in full HDTV! The Grand Alliance theme at the Show was “From Vision to Reality.” Here are some excerpts from the world premiere demonstration of Grand Alliance HDTV:

At the Grand Alliance press conference that followed, Sarnoff CEO Jim Carnes gave a high-level technical overview of the Grand Alliance HDTV system. Yes, it was full HDTV in a single broadcast channel, but it was a flexible digital system that offered so much more. Jim also describes the four demonstration kiosks in the Grand Alliance booth:

My team at Sarnoff had taken on the task of developing the demonstrations to show the long-term opportunities of adopting a digital television standard. Here is Jim’s commentary:

Zenith CEO Jerry Pearlman spoke next, emphasizing the Grand Alliance’s investment and the development of a revolutionary, world-leading digital HDTV system. He urged rapid adoption of the system by the FCC and commercial deployment by broadcasters. In the following commentary, Jerry also mentions “DBS TV,” referring to the DirecTV system that was under development by Thomson, Hughes and Sarnoff, in parallel with the Grand Alliance effort:

After 25 years, it’s fascinating how the questions and discussion in 1995 foreshadowed many subsequent developments. There are questions about receiver prices, licensing, spectrum auctions, FCC adoption, HDTV launch strategy, satellite television and the role of ATSC and other standards organizations. You’ll even find me discussing progressive and interlaced scan, and the tradeoff between quality and quantity for multicasting. Watch them at the links below:

April 10, 1995 was a triumphant day for the Grand Alliance, and it is certainly one of the most memorable days of my career. The Grand Alliance had overcome tremendous obstacles to define and deliver its system. We didn’t know how all of the testing would go, and we had no idea of the opposition that would emerge from the computer industry the following year, but that’s a story for another time. Most aspects of the Grand Alliance’s vision have indeed become a reality, such as HDTV, multicasting and flexible channel use. Our interactive advertising ideas were well ahead of their time but will hopefully manifest themselves at last with ATSC 3.0. (Hmmm, maybe those capabilities in 3.0 didn’t just happen by accident…)

Enjoy the videos as we celebrate the 25th anniversary of the Digital HDTV Grand Alliance system’s world premiere — the system that became the ATSC (1.0) standard and broadcast television as we know it today.