The end of 2020 has come and gone. The pandemic slowed down many of our businesses and our strategic plans were revised multiple times over the course of the year. For Next Generation TV, though, in spite of all the challenges, significant progress was made in launching stations across the country in 2020. Below we’ve captured and illustrated some of that progress in pictures and graphs (and a small amount of clarifying text) relating to the status of the Next Gen TV rollout by broadcasters in 2020.

ATSC maintains an updated graphic map showing the designated market areas (DMAs) of the U.S. that currently have Next Gen TV service available from at least one broadcaster:

MARKETS WITH NEXT GEN TV STATIONS 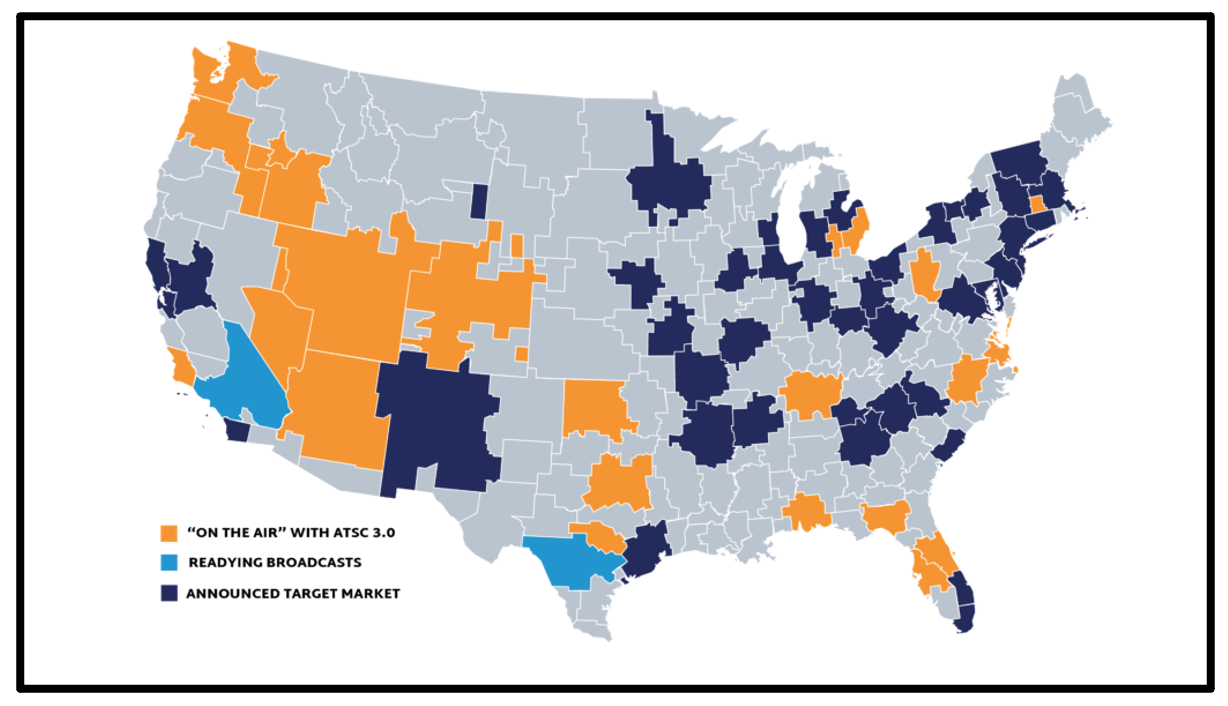 A relatively new website aimed at consumers also has a map showing Next Gen TV deployments in a slightly different format, along with a list of the markets that are on-the-air now (orange) or expected to launch in 2021 (white): 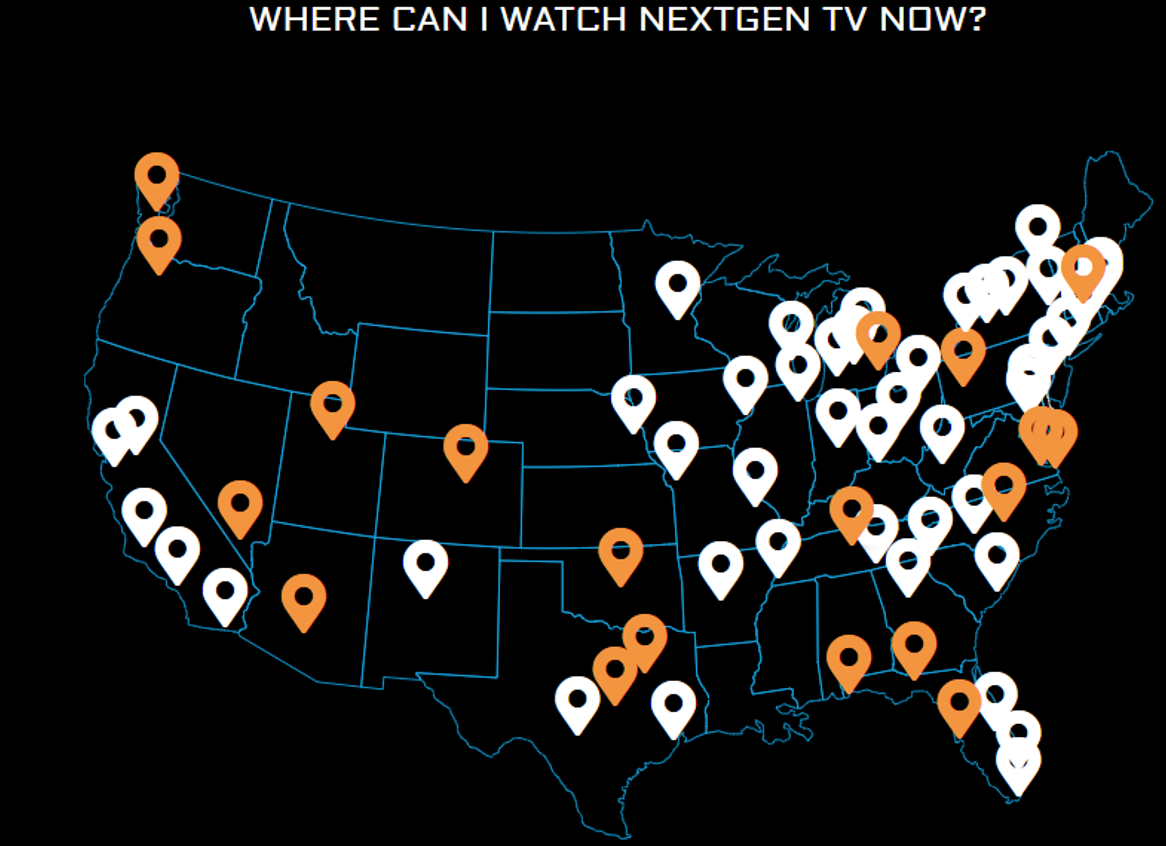 Using these data sources and digging into publicly available press releases, with a little bit of light analytical work, below are some charts that show the status of the Next Gen TV rollout from various vantage points.

The original beta launch of Next Gen TV in Phoenix was announced in November 2017. In 2020, a steady rise occurred in the number of Next Gen TV stations on-the-air with the most rapid increase toward the end of the year: 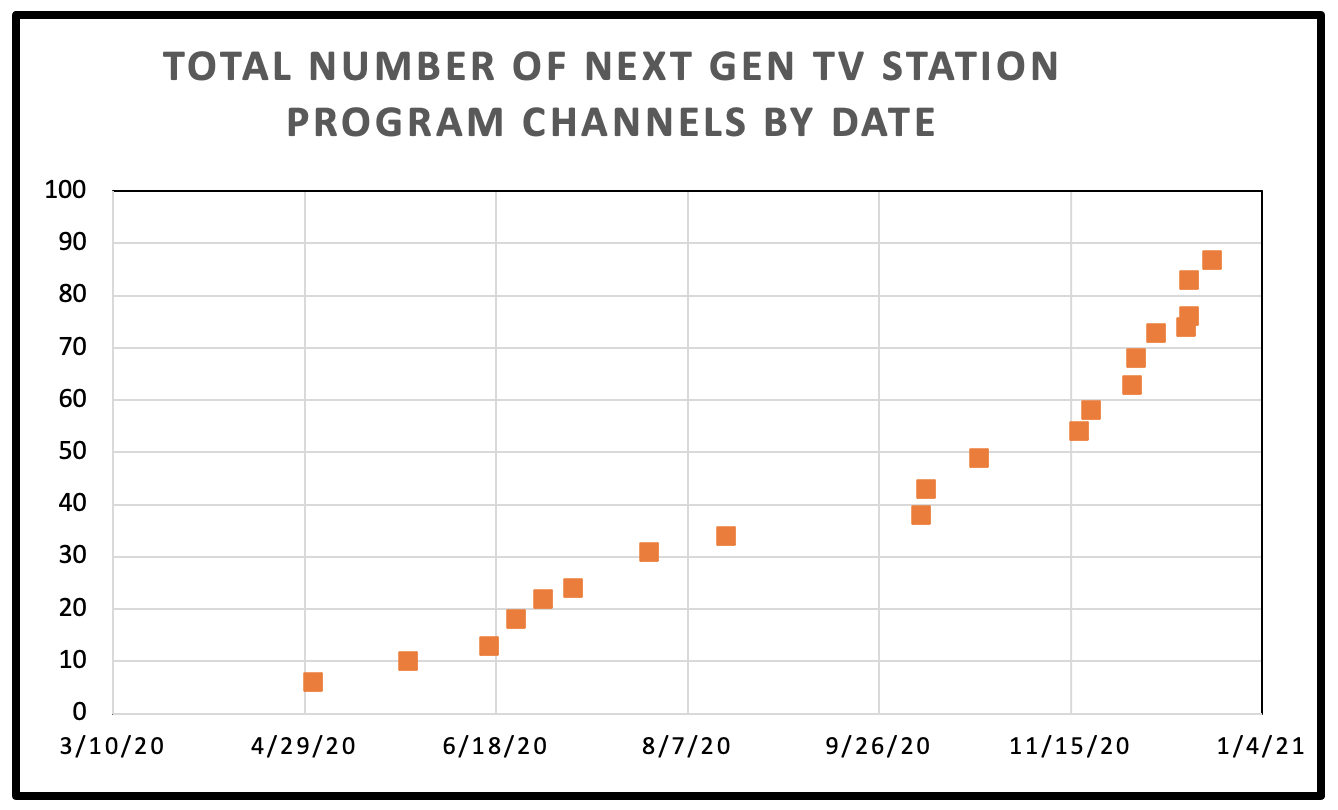 The number of Nielsen Designated Market Areas (DMAs) launching Next Gen TV also steeply rose in the last few months of 2020 as shown below. (Note: the effective number of consumer markets is even higher than shown as some DMAs include multiple cities located near each other, including the Norfolk-Portsmouth-Newport News VA (including Virginia Beach), Tampa-St. Petersburg FL and Mobile AL-Pensacola FL DMAs.) 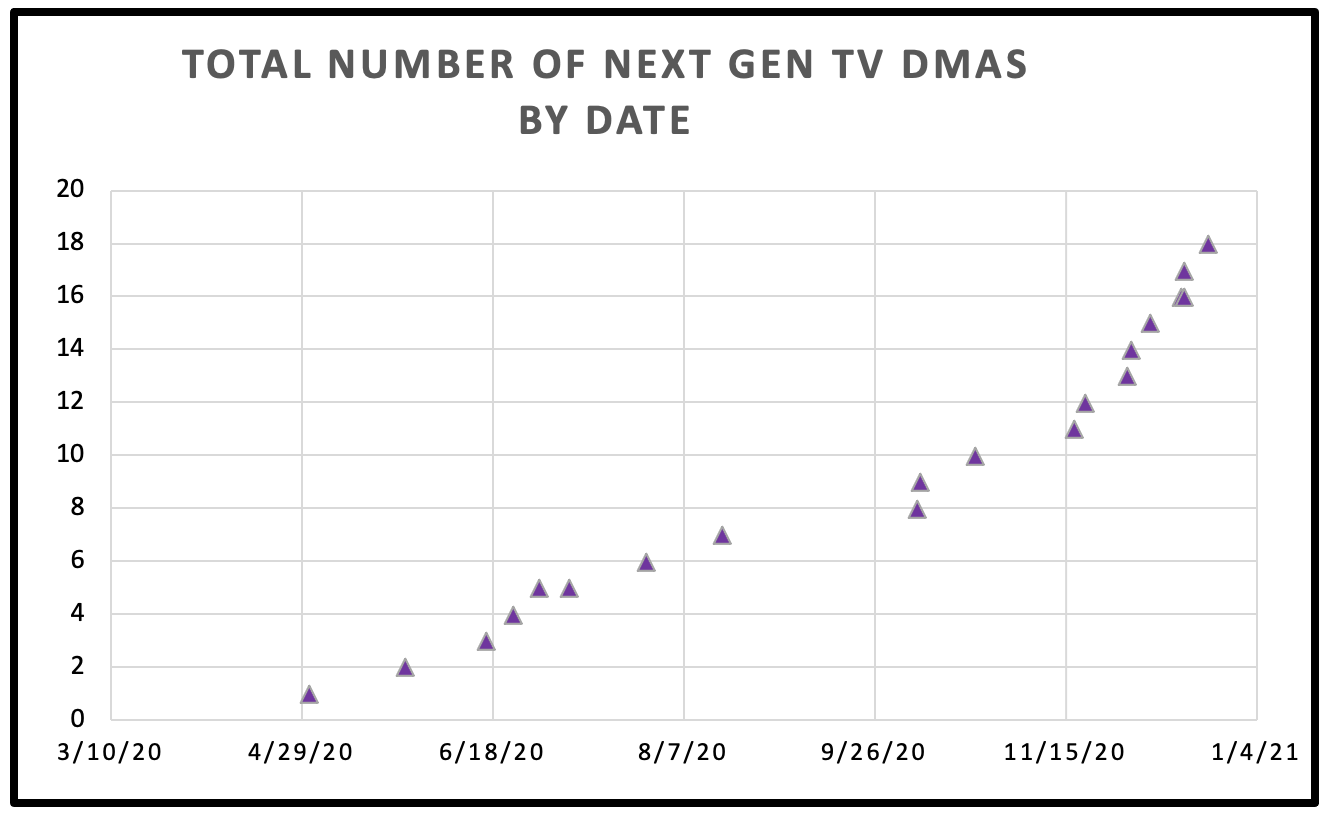 At the end of 2020, programming available from all major commercial television networks was represented in the Next Gen TV program service offerings: 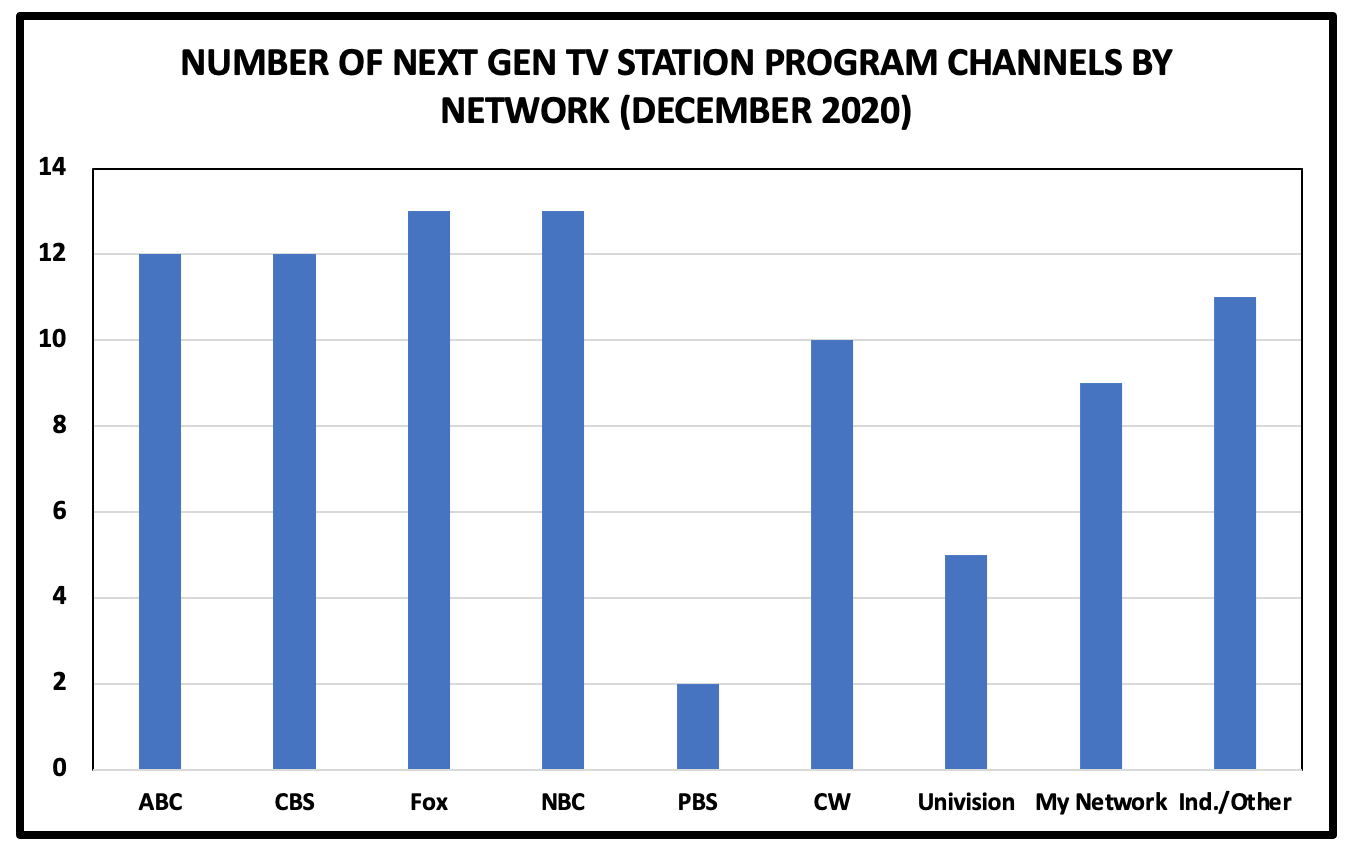 Nexstar and Sinclair stations have the most Next Gen TV program channels on the air, but well over a dozen station groups are participating in providing Next Gen TV service: 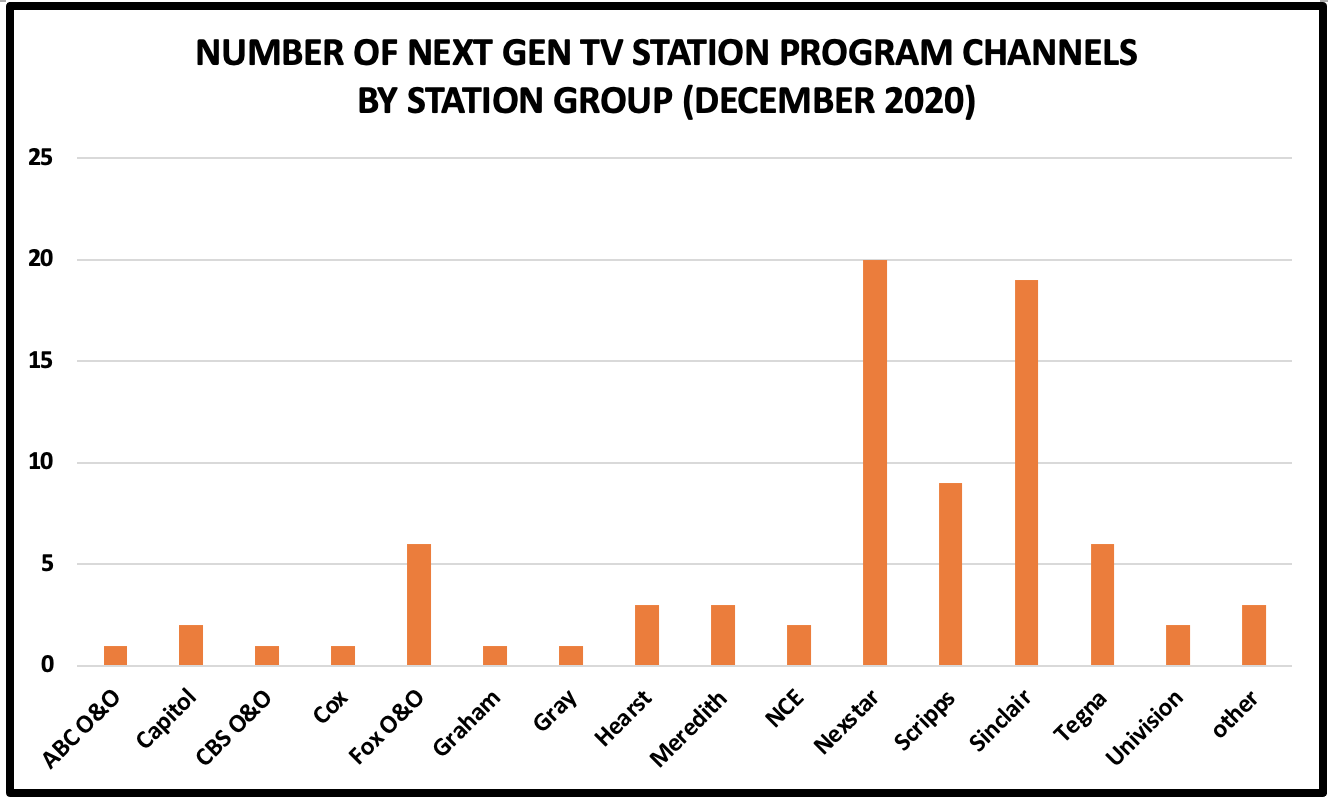 The launch of Next Gen TV service is made possible by the use of channel sharing, whereby one or two host stations are used to carry the Next Gen TV program channels of that market’s participating stations, with the host stations’ ATSC-1 programming carried by other ATSC-1 stations. Nexstar and Sinclair currently operate the most host stations, but a total of nine station group owners operate at least one host Next Gen TV station: 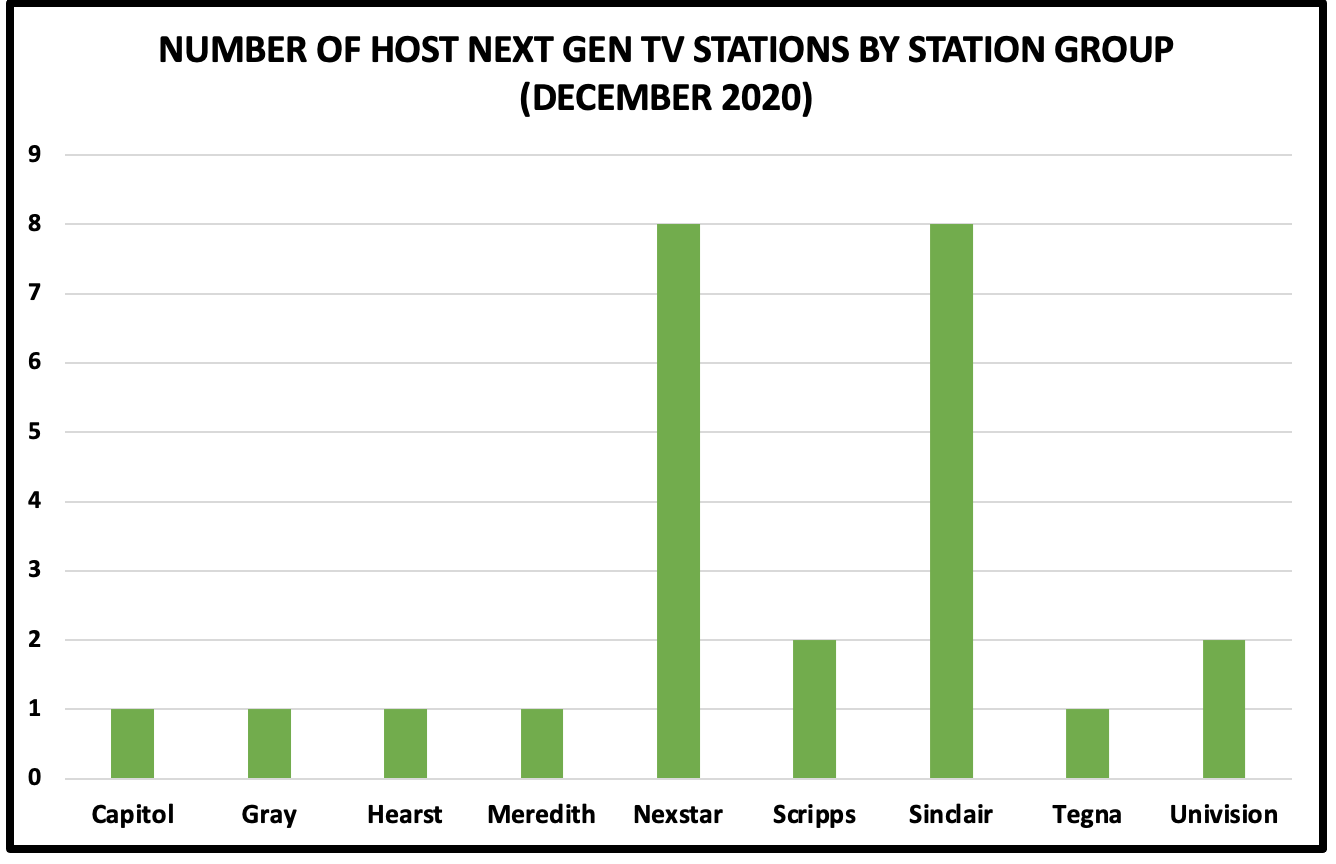 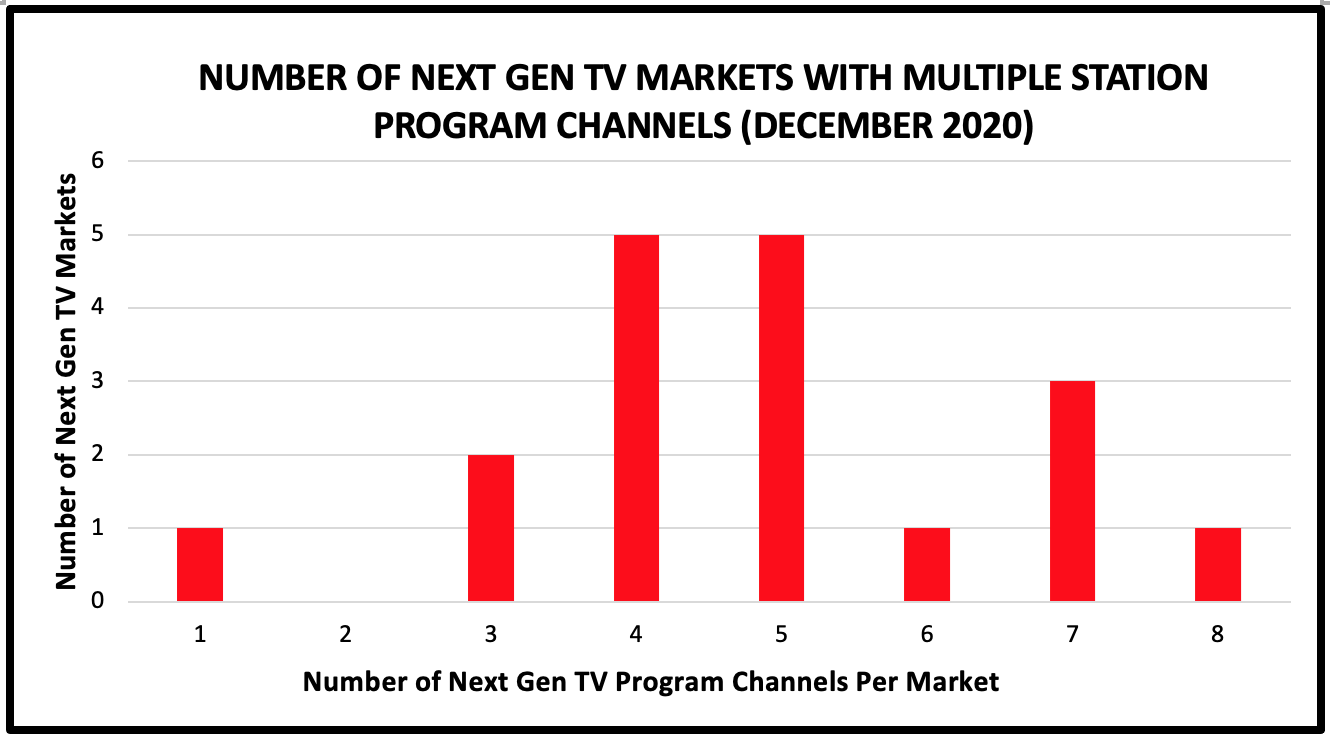 So, in 2020 we achieved program distribution of close to 100 stations on the Next Gen TV platform in around 20 markets, with all major networks present, a wide range of station groups participating and serving as host stations and over three quarters of the Next Gen TV markets with four or more stations’ programs on the air. Not a bad start as we move into 2021, when WatchNextGenTV.com shows an additional 73 markets are expected to launch Next Gen TV:

By Lynn Claudy|January 5, 2021|Blog|Comments Off on A Few Pictures About Next Gen TV Are Worth a Few Thousand Words