A Look at Radio in Hyundai’s Electric Ionic 5 Dashboard

Electric vehicles (EVs) and radio have been in the news lately, often because some automakers (notably VW, Audi, Porsche, BMW and Mercedes) are not installing AM radios in their EVs. This is due in part to AM radio signals being more susceptible to interference from electrical noise generated by EVs than are signals in other, higher frequency bands like FM and satellite radio. An NAB conference technical paper, highlighted in a previous PILOT blog, discusses this issue and concludes that AM can work just fine in an EV if the automaker employs readily available technology to mitigate the EV interference in the AM band. 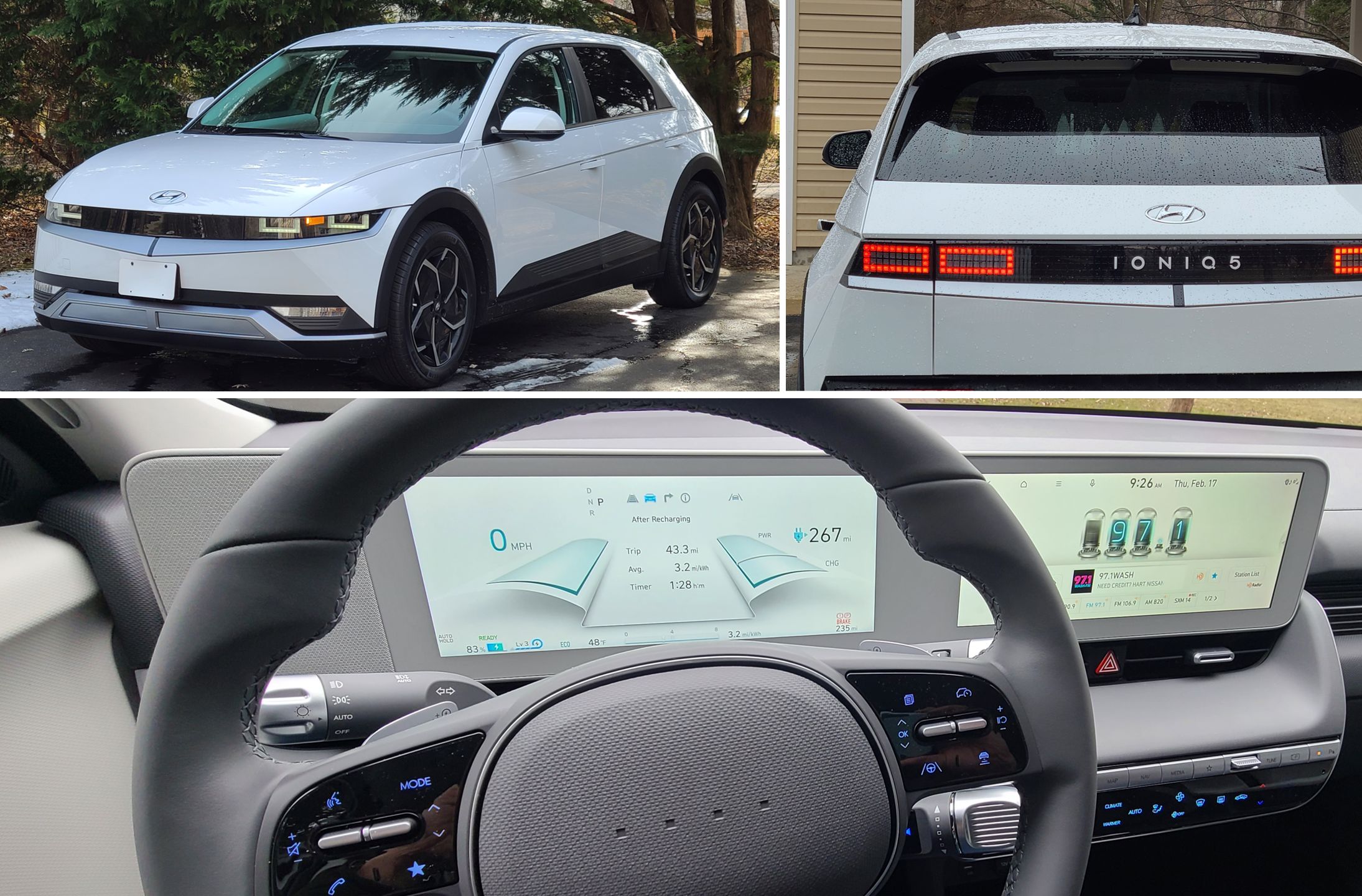 Not surprisingly, the list of automakers equipping EVs with AM is longer than the list of automakers that do not, and includes GM, Ford, Hyundai, Kia, Toyota, Nissan and Jaguar. One of these automakers, Hyundai, is just now delivering the brand new 2022 Ionic 5 EV to dealers in the U.S., and the focus of this blog is to look at the radio in this EV. Shown in these first images is the exterior of the Ionic 5 and its dashboard, thoroughly modern and consisting of two flat-panel displays.

The right-hand dash display is a touch screen used to control many of the car’s features. Subsequent photos below show this right-hand screen with the radio selected for display and illustrate some of the features of this radio as well as the careful thought that went into its design. The Ionic 5 radio tested is only over-the-air, there is no internet connectivity for radio functionality (a so-called hybrid radio) as would be the case in, for example, a DTS Autostage radio implementation. Internet-based media content, such as streaming audio or podcasts, can be accessed in the vehicle using either Apple CarPlay or Android Auto which are both supported.

This first screenshot was taken with the radio tuned to Hubbard station WWFD, 820 kHz, Frederick, Md., the first full-time all-digital AM radio station in the U.S. Dominating the display is the faux nixie tube motif used to indicate the frequency of the tuned-to station. Below these big numbers are shown station metadata (station logo, song title and artist) and a number of radio controls surround this information, described in detail in the second screenshot.

It seems odd that for this radio, the station metadata is much smaller than the available display real estate would allow, and smaller than that implemented in some vehicles by other manufacturers. One possible explanation is that by having static elements like the station frequency dominate the display, driver distraction is minimized, an important concern for automakers.

Most of the elements shown in the AM radio display are identical for the FM and Sirius XM (SXM) displays. The next two screenshots show the HD Radio and analog radio displays for iHeartMedia FM station WASH, 97.1 MHz, Washington, D.C. The first was captured with the radio set to receive HD (notice orange HD logo) and new features on the screen compared to the AM display include the list of this station’s multicast channels, accessible by touching a channel number or simply tuning up, and album art delivered using the HD Radio Artist Experience feature.

A single touch of the HD button switches the radio to analog-only reception and the result is shown in the second FM screenshot. Note the Radio Data System (RDS)-supplied metadata both below the numeric display and over to the side, as well as the absence of the album art and any multicast channel info. One interesting consequence of the small metadata display is that the difference in appearance between analog FM and HD Radio signals is minimized, more so than in other receiver designs with more prominent metadata.

Next up is a screenshot when using SXM satellite radio. It is interesting to see how the faux nixie tube display is altered to show the SXM channel number. Otherwise, this display is similar to the AM and FM displays shown above. One feature that the SXM display includes which is lacking in the AM and FM displays is a one-touch direct-tune button which, when depressed, calls up a keypad for directly entering a channel number (direct-tuning is supported for AM and FM but from a drop-down menu, not directly from the radio screen).

Rounding out this collection are two final screenshots showing how WASH uses its metadata to display advertising content. The first screenshot was with the radio in HD Radio mode and the second, analog-only mode. Note the presence of the station logo in the HD Radio mode screenshot. Logo support is another feature of the HD Radio FM service. This could also have been an advertiser image.

It’s not apparent from this still image but the advertiser text shown in HD Radio mode is actually scrolling as it is longer than the space provided in the display. Interestingly, in the analog mode case the text is all displayed at once (no scrolling) because of choices made by Hyundai regarding font size and number of characters per line supported in each mode.

Radio broadcasters should be encouraged that automakers like Hyundai are offering a modern and highly rated EV with a full-featured AM/FM/SXM radio that is front and center in the dash. More importantly, broadcasters need to step up to the plate and provide the audio program metadata seen in these examples and which are now “table stakes” in audio infotainment services, expected by listeners and automakers alike.

By David Layer|February 28, 2022|Blog|Comments Off on A Look at Radio in Hyundai’s Electric Ionic 5 Dashboard