A Touching Aspect of ATSC 3.0 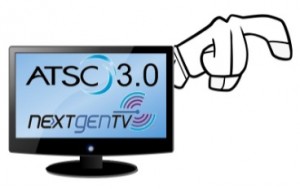 ATSC 3.0, or Next Generation TV, is often described as capable of providing a more immersive media experience. However, with improved video and audio capability, it still generally only addresses two of the five human senses: seeing and hearing. Research on signals related to the sense of touch is very much alive in the development of advanced tele-experiences, covered under the general category of haptics (derived from haptikos, the Greek word for touch), referring to generating touch-related sensations in a device or interface. In looking at the next steps in the advancement of immersive media, and at least for a subset of applications, ATSC has been looking at the role that haptics technology may play in the future. Based originally on a proposal from Immersion Corporation, a work item on haptics interface was approved in ATSC in June 2020. Technical work began shortly after that, culminating in the development of the ATSC Recommended Practice A/380: Haptics for ATSC 3.0, which was voted on, approved and published on the ATSC website on February 3, 2021.

The ATSC Recommended Practice on Haptics for ATSC 3.0 is focused on applications where content is consumed on a mobile or tablet device, either as a primary receiver of a broadcast transmission or as a companion device tethered to a primary receiver, the reason being that many of these devices already contain haptic transducers used to provide feedback to consumers interacting with the touchscreen or for effects associated with games or other applications. The ATSC Recommended Practice does not define any particular haptics protocol but instead provides recommendations on the overall framework for how to retrieve a separate haptics file from a broadband-based repository and play it in synchronization with the broadcast stream content. As an example, Figure 4.2 from the Recommended Practice (shown below) illustrates the overall architecture for a haptics signaling channel to interface with a companion device. 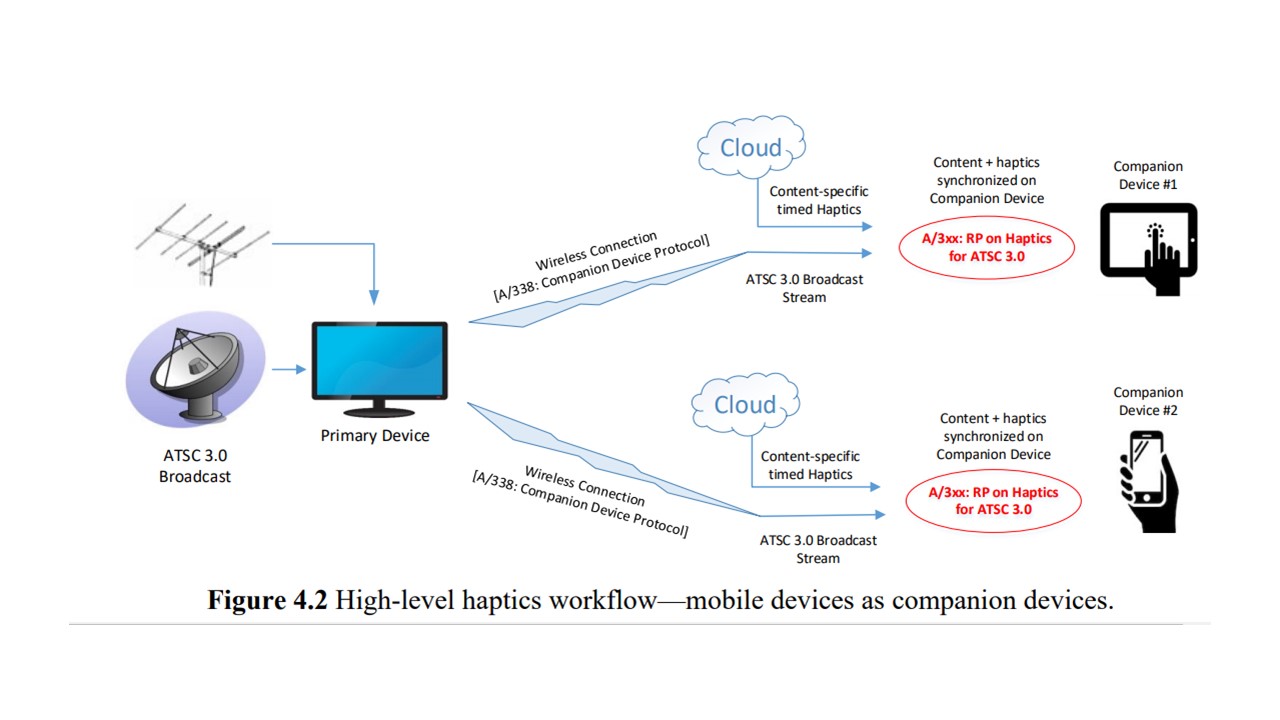 Meanwhile, the well-known standards organization Moving Pictures Experts Group (MPEG) is actively working on defining protocols for conveying haptics information over communications channels. In October 2020, at its 132nd meeting, MPEG issued an initial draft Call for Proposals (CfP) on the Coded Representation of Haptics, calling for the submission of technologies to efficiently represent and compress haptic signals that can be synchronized with audio and/or video media. At the subsequent 133rd MPEG meeting in mid-January 2021, a revised draft CfP was released, dividing the haptics standardization effort into two phases, comprising a basic standard and one with more advanced features. According to MPEG, the final CfP is expected to be released in April 2021, along with documents on submission and evaluation procedures and other relevant guideline documents. Subsequently, evaluation and testing phases will follow and selection of technologies is planned for October 2021 with working draft text to be developed by January 2022.

The use of haptics is well known for applications such as tactile feedback for touchscreens and visceral feedback for explosions and similar events in video games. But does it have practical application for broadcasting? The ATSC Recommended Practice provides several practical usage scenarios involving music videos, football games and advertisements with varying degree of haptic feedback, indicating there are several types of content where haptic information would likely be beneficial. On this latter point, the Recommended Practice provides some data from a joint MAGA-IPG Media Lab-Immersion study on the effectiveness of haptics-enabled mobile ads. The study shows that haptics-enabled ads can elicit more excitement and happiness, more connectedness and favorability to brands and more effectiveness with new customers. An example of the level of improvement for excitement and happiness from the study is shown below. 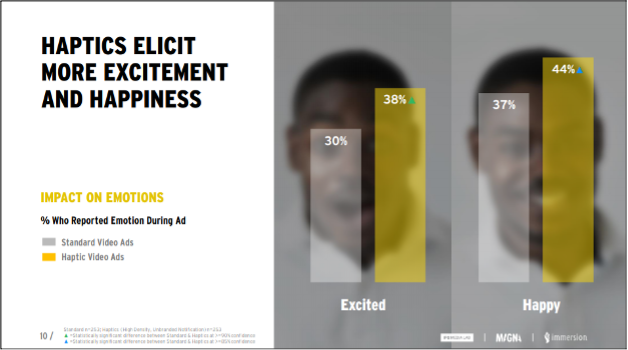 The study also found haptic feedback in ads can be too much of a good thing, with higher density haptics being received more negatively than lower density haptic events. 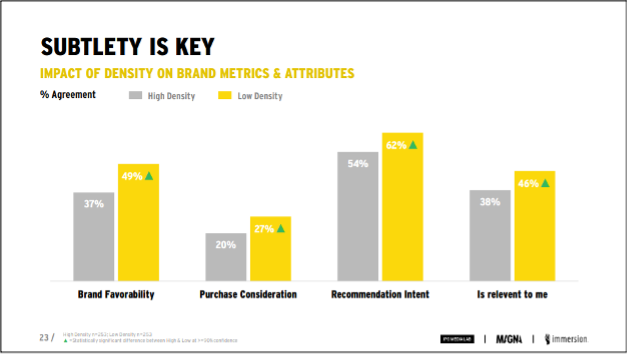 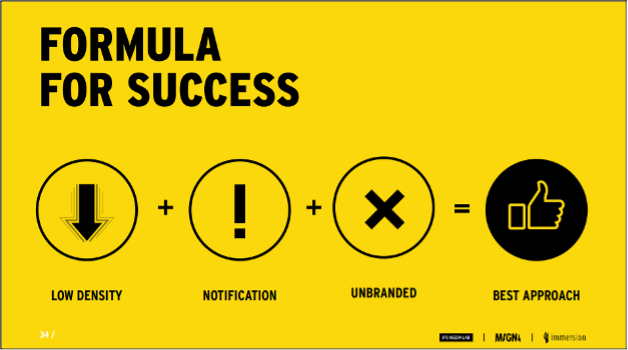 It’s often said in technical circles that just because you can do something doesn’t mean you should. And certainly, the applicability of haptics to media delivery is an area where caution and research should go hand-in-hand before unleashing massive amounts of touch-enabled program content. Nonetheless, haptics technology is finding its way into appropriate mainstream media venues and broadcasting needs to be technically ready if marketable opportunities become desirable. There is, however, unlikely to be momentum in the near term for extolling the virtues of reviving a modern version of Smell-O-Vision from the early 1960s or the media industry developing a taste for technologies called anything close to Taste-O-Vision; stimulation of three senses is probably where we should stop for now.