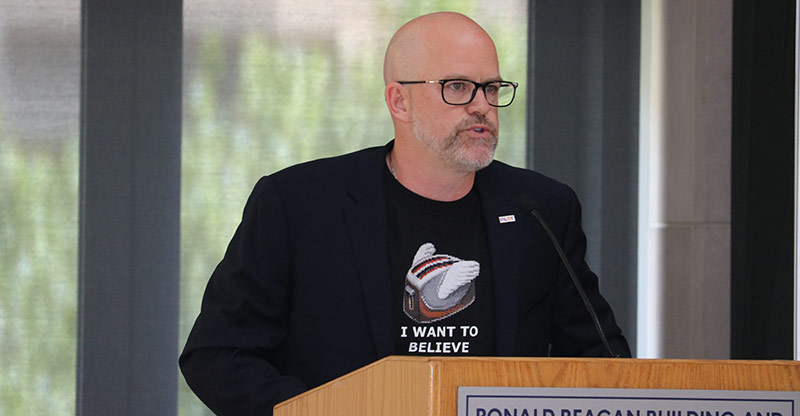 ATSC 3 has had a very successful year, but NAB CTO Sam Matheny reminded the standing room only crowd at the 2018 Next Gen TV Conference that there was still more to do.

“We are at that magical time when the plans are done, but the products are not,” he said. “This is the place of invention, creation and innovation. It is an exciting place and one that should inspire us to do our best work.”

Sam opened by highlighting all the milestones Next Gen TV has reached, from the authorization of the standard in November, through the WRAL and NBCU Next Gen broadcast of the Winter Olympics, to the work at the NAB and CTA Next Gen Test Station in Cleveland.

At this point, Sam took a break in his keynote for a wardrobe change, taking off his shirt to reveal an Afterdark screensaver t-shirt. He wore the toaster and chicken wings ensemble to reference Lynn Claudy’s now legendary “Toaster Speech,” and to pay homage to Rich Chernock who will step down from his role as TG3 Chairman this month.

“Let’s make real the promise of what we’ve written.”

The ATSC Conference is subtitled “The Road to ATSC 3” and Sam used this metaphor to encourage the next stage of development. “We have spent the last five years in the planning and design phases,” he said, “and we are now entering the earthwork phase.”

“I want to use this opportunity to encourage and challenge the entire ATSC  ecosystem to double down on building the tools needed to realize the full potential of the standard.  Let’s make real the promise of what we’ve written.”

“We need alpha testing and beta testing,” said Matheny, “and we need a mechanism to get to conformance.”

Sam described the Road to ATSC 3 as a journey rather than a destination, and reminded the audience not to underestimate how big of an impact the standard will have long term.

“There is lots of excitement around ATSC 3 and rightfully so. With that said, I believe Next Gen TV will indeed have an even bigger long range impact, and it will be far greater than anything we’ve predicted.”

The key to this long range impact is the fact that ATSC 3 is the first IP based broadcast standard. For example, Sam said he believes “there will be whole new courses of study that will be developed around the networking impact of broadcast IP and how it can be leveraged in an IoT world.”

Beyond the potential IoT applications, Sam underscored the value Next Gen TV will provide to branding, commerce and in broadcasters abilities to tell the stories that matter.

“Let’s push forward with the earthwork,” he said, “break new ground and begin to pave this road to ATSC 3.”