While IP-based studio-to-transmitter links (STLs) have both reduced operational cost and increased connection flexibility, they are prone to packet losses that can degrade the quality. A session at this year’s NAB Broadcast Engineering and Information Technology Conference (BEITC, April 7-12, 2018, Las Vegas, NV) entitled “Engage! New Radio Technologies” includes a paper, excerpted here, discussing how radio broadcasters can reliably transport TCP/IP application packets, including E2X streams, multiplexed or non-multiplexed with the main audio signal, from the studio to the transmitter. This paper is entitled “Reliability for E2X and other IP traffic across Radio Studio to Transmitter Link,” and was authored by Keyur Parikh, Director, Intraplex Business Unit, GatesAir, Mason, OH.

Over the past decade, there has been a gradual convergence of various layer 1 and 2 communications technologies to internet protocol (IP) at the network layer. Whether it is cable modem, digital subscriber line (DSL), satellite or microwave, most communication devices now provide an Ethernet “spigot.” This convergence has enabled a rapid proliferation of both public and private IP networks which has significantly reduced STL costs. The combination of reduced STL costs and improving speeds has been the key for the proliferation of IP for all applications, including broadcast audio.

While IP-based STLs have provided many benefits, there are also many network impairments that are unique to packet-based networks, which, if not overcome, can greatly impact the quality of audio, a critical metric for radio broadcasters. Here are some of challenges and methods that are typically used to overcome them:

Current protection methods work equally for all types of RTP payload, whether containing audio data, FM multiplex (MPX) signals or multiplexed payload of audio and associated metadata. This then can be further extended to carry IP packets from external TCP or UDP applications as payload of RTP packets. The IP packet payload can be transported in-band, i.e., multiplexed with the main audio signal, or out-of-band as separate RTP streams, as shown in the figure. 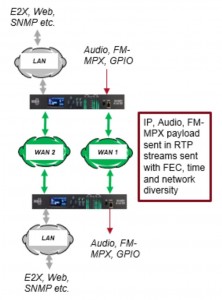 As seen in the Figure, the codec integrates a gateway function where one of the network interfaces can be used to ingest external IP packets. These packets arrive at the codec, either because it is set up as a next-hop gateway or it is performing proxy-arp for the real IP destination across the STL. The incoming IP packets then become the payload of the outgoing RTP streams and get protected using techniques described herein.

This paper will be presented as part of the BEITC Engage! session on Sunday, April 8, 2018, from 10:40AM-noon in room N260 of the Las Vegas Convention Center. It is also included in its entirety in the 2018 NAB BEITC Proceedings, which will be available at the Show and on-line from the NAB Store following the Show. For additional conference information visit the NAB Show web page.