Broadcast Audio in a Pandemic

Most broadcast technology professionals are well acquainted with the evolution of live audio connections within our industry. From dial-up telephone lines to dedicated analog and then digital point-to-point connections, through switched digital and cellular services and ultimately to IP—including the public internet and mobile connections to it—live audio feeds have continuously expanded their range of quality levels, flexibility of deployment and cost effectiveness. 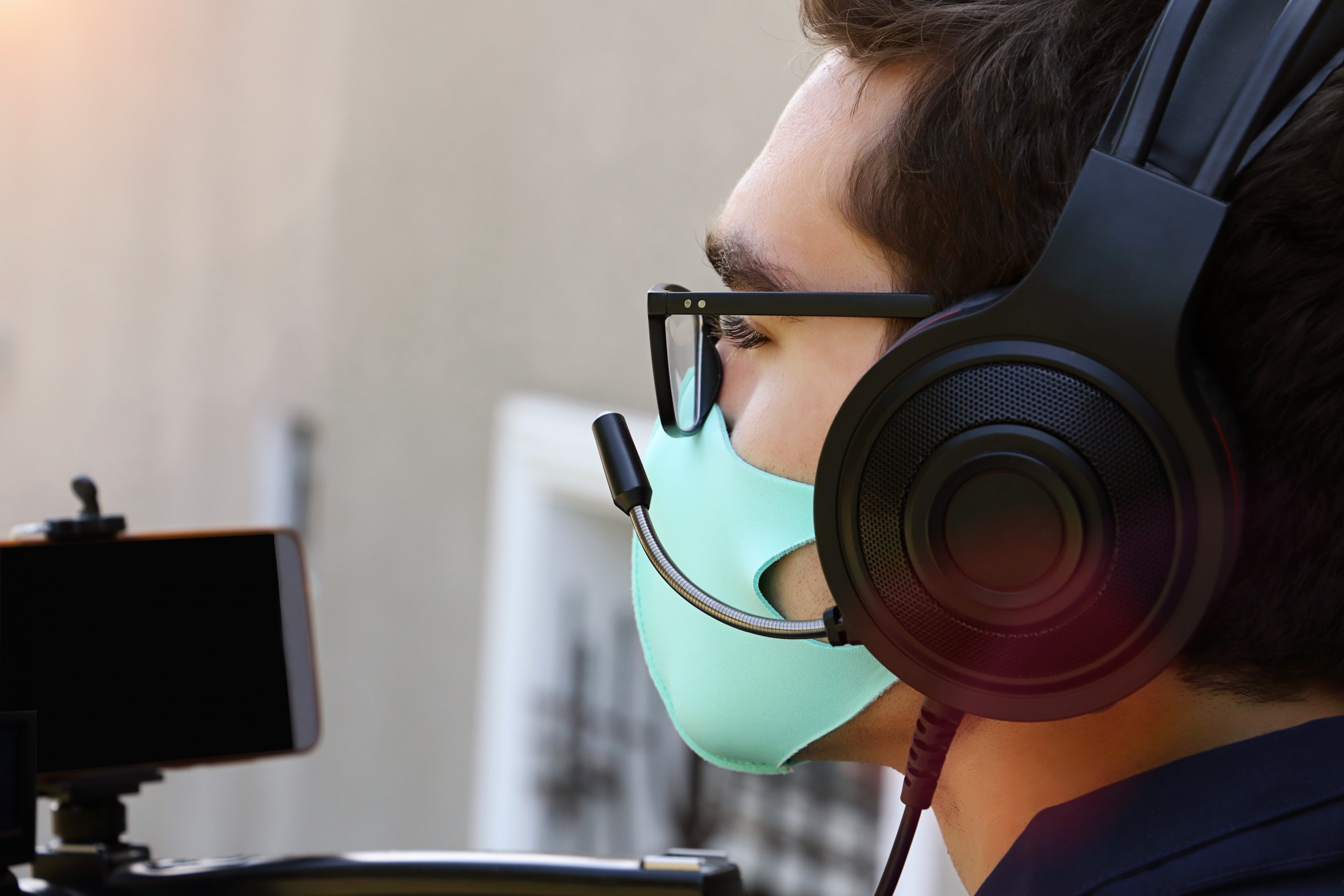 Despite broadcasters’ long experience with remote audio and video origination, however, today’s work-from-home (WFH), reduced-travel and social distancing requirements caused by the COVID-19 pandemic have made the maintenance of high on-air audio quality from all locations a real challenge, as both radio and television broadcasters cope with a broad spectrum of fidelity in connecting anchors, reporters and interview guests for live programs. Quality differences among connections are often made even more profound by their immediate juxtaposition to one another on the air.

While obvious variations in video quality are also an issue, audio probably exhibits an even wider range of fidelities today, which is critically important since speech intelligibility holds higher information value than does video for most news and talk programming content.

The good news is that nowadays most people—broadcasters and others—have ready access to internet connectivity and A/V-capable terminal equipment (i.e., desktop or laptop computers and mobile devices) in their homes, reducing the need for special installations, dedicated hardware or technicians at the WFH site. In addition, the proliferation of powerful and freely available online teleconferencing platforms makes such interconnection fairly easy, even for non-technically savvy users. But from there, many other variables can affect the result, as we have all seen and heard on the air.

Broadcasters’ quality-control rules have necessarily been liberalized in the WFH era, as they have had to greatly increase their reliance on such internet-based teleconferencing platforms like Zoom, Skype and others. Audio quality may even vary widely during a program or conversation, at times severely impairing the broadcast product. And Murphy’s law dictates that the worst artifacts will never occur during testing, but only when the WFH subject is on the air. Moreover, while these platforms let WFH users easily see how they look on camera, they do not allow users to hear how they sound.

So, let’s look under the hood to understand what’s going on with WFH audio and examine some ways to possibly improve it.

Several elements conspire to degrade WFH audio, rendering it anywhere from noticeably different from what audiences have come to expect from broadcasters to completely unintelligible, and sometimes moving between those extremes over a single session.

1) Room acoustics: Domestic environments are quite different acoustically from studios. Besides generally exhibiting higher ambient noise levels, typical rooms in a home reflect much more sound than an acoustically treated space, due to the substantial area of hard surfaces on the boundaries of the room, particularly walls and ceilings, which are almost always flat, rigid and uncovered. Bookcases (filled with books) can reduce wall reflections, but otherwise, solving this problem is not as easy as fixing WFH video problems, where a new camera, different lighting or a better internet connection can make a big difference. Major acoustical fixes to the home environment are not likely to be easily or cheaply accommodated, especially if the space is to remain largely true to its original function as a living room, bedroom, kitchen, etc. Soft furniture, throw pillows and carpeting can help, as can turning off heat or air conditioning temporarily, but a better approach is to reduce the impact of the acoustics on the captured sound via judicious use of microphones.

2) Microphone choice and placement: While a high-fidelity capture of sound is usually the primary guiding principle for professional use of microphones, in the WFH case the main goal is to eliminate the acoustical environment as much as possible and capture only the voice of the subject in as clean and dry a manner as is practical. The easiest way to do this is through the use of a headset with boom microphone, which places a directional microphone close to the subject’s mouth—but off to one side rather than directly in front of the mouth to avoid plosives (“p-pops”). Alternatively, a professional microphone mounted on a mic stand can be similarly positioned, as typically used in a radio studio. Either approach can be interfaced to terminal equipment either by analog connections, or in the case of a desktop or laptop computer, via USB. Some initial setup may be required to enable the use of external microphones, but the effort is usually worthwhile because it will provide substantially better quality than using the built-in microphones on the computers or mobile devices.

In some TV applications, however, the use of large or head-worn external microphones is not preferred for visual reasons, in which case a lavalier (clip-on lapel mic) can be used instead, with an analog-audio-to-USB adapter to interface it to a computer.

Example of an interface that converts any professional microphone to a USB device. This unit also offers an analog headphone monitoring jack (3.5 mm) with balance control between send and receive audio levels.

3) Codecs and connections: Unless professional remote equipment over dedicated lines is employed (as might be the case for regularly used connections to anchors’ or reporters’ homes), the typical WFH connection is from a computer or a mobile device in the home to a computer at the broadcast facility. These devices all are equipped with a number of codecs and network interfaces, and these are generally smart enough to handshake and negotiate the best possible connection via the public internet without user intervention, in an attempt to provide both high audio quality and low latency (i.e., delay). But there are tactics that can be applied at the WFH site that may help, as follows:

4) Echo and noise cancellation: Probably the most common—and least understood—source of poor or variable WFH audio quality today is the echo cancellation built into the terminal device. Automatic echo cancellation has been an important element of telecommunications for many years, allowing remote two-way conversations to take place over long distances without callers hearing echoes of their own voice.

Originally, in the dial-up era, echo cancellation circuitry on both ends of a phone call only had to worry about reflections in the electrical domain on the phone line between the two connected telephones, so performance was pretty stable throughout a given phone call, and cancellation action was usually imperceptible. When a traditional telephone handset was used, very little acoustic echo took place because the earpiece of the phone handset went directly to the ear of the caller, and the mic of the handset was close to the talker’s mouth. But when speakerphones are used, echo cancellation has to accommodate louder and more continuously variable echo conditions. In such cases, the sound of the remote caller’s voice leaks quite easily into a microphone that is usually much farther away from the local user’s mouth, and room reflections plus noise are added to the remote caller’s voice by the local user’s acoustic environment. Therefore, the echo canceller’s range and dynamic response must be far more adaptable.

Today, every laptop and mobile device includes such speakerphone functionality, allowing hands-free, two-way communication. But this use case maximizes the acoustical contribution from both voice reflections and added noise that echo cancellers must cope with, which necessarily changes continuously throughout a call. The capability and quality of echo cancellers also varies between devices, with some being much better than others. Somewhat counterintuitively, mobile devices’ echo cancellers often outperform those of laptops; this is because today’s mobile devices evolved from the tradition of being used almost exclusively as phones, while laptops’ use for communications is more recent and not their primary application. As a result, when a WFH connection uses a laptop’s built-in microphone and speakers, the echo canceller is constantly stressed, resulting in the subject’s voice often sounding muffled, underwater and/or exhibiting wildly varying frequency response and/or loudness during the session.

To reduce this potentially major artifact, any or all of the following three steps may be helpful: 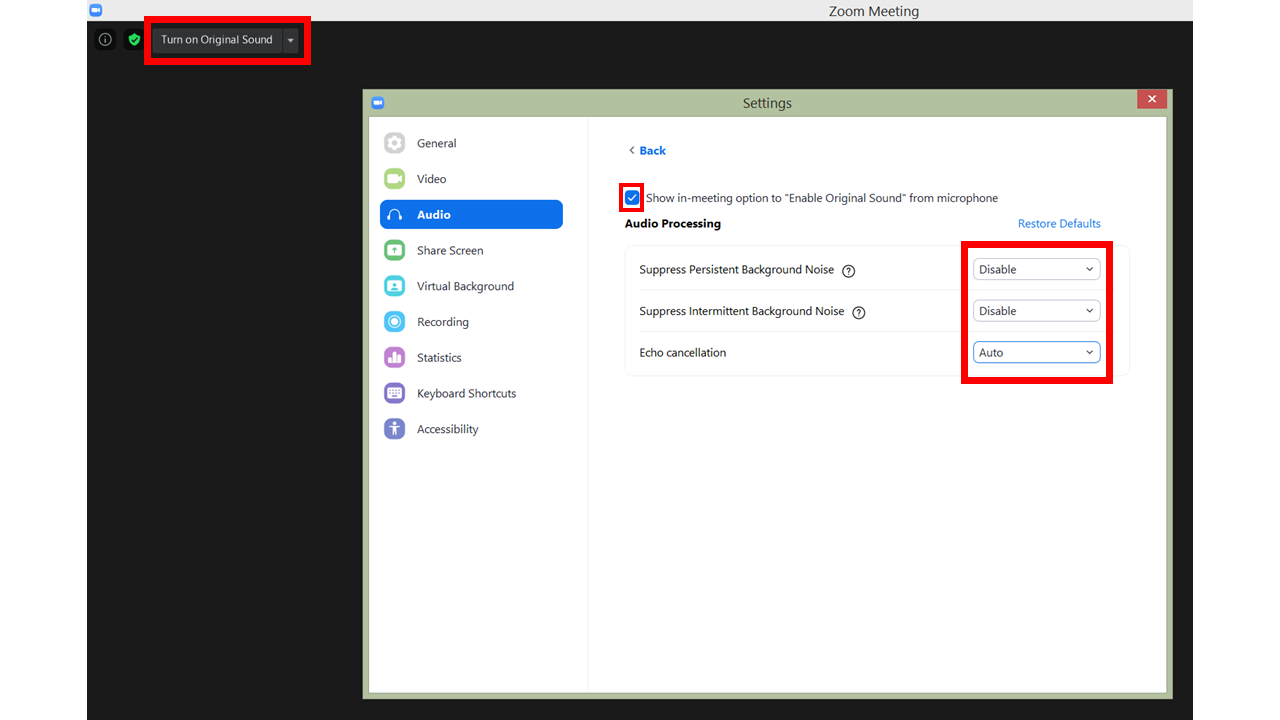 The Zoom client’s advanced audio settings allow adjustment of audio processing, and enabling of “Original Sound.” For optimum audio quality, the drop-down options for noise suppression and echo cancellation should be set as shown (in large red square). Checking the “Enable Original Sound” box (shown in small red square) will permanently expose the button at upper left (in red rectangle) during all Zoom sessions, allowing the highest fidelity audio to be quickly selected. This button’s text toggles to “Turn off Original Sound” when selected. The drop-down arrow to the right of the button allows the “Original Sound” option to be permanently associated with a given microphone on the device.

As time goes on, more will likely be learned about how to improve WFH broadcasting. PILOT’s current Innovation Challenge invites your solutions in this regard. Submissions close on August 28 at 5 p.m. ET.

For more about Production in a Pandemic, join NAB Show for the premiere of Collectively Speaking on September 2, 2020, from 1-4 p.m. ET.

By Skip Pizzi|August 24, 2020|Blog|Comments Off on Broadcast Audio in a Pandemic