Broadcast TV (the Platform) and “A Christmas Carol”

Consultant Shelly Palmer’s recent piece, “TV: The Platform vs. The Artform,” is a cautionary tale. Making the case that the TV “platform,” meaning traditional broadcast television stations and networks (along with cable networks), “has damaged its consumer experience beyond repair,” he comes to the following exasperated conclusion: “TV is dead to me. It’s not only merely dead; it’s really most sincerely dead. Muerto. Over. Stick a fork in it… it’s done!”

Palmer is a thoughtful consultant and has some insightful observations in his writings. In this case though, his treatment of the Broadcast TV platform ignores the many strengths of the platform and treats it as a static technology.  Moreover, he also completely neglects to take into account the promising consumer experience trajectory enabled by Next Gen TV, through which those who, like Shelly, try to proclaim TV as “dead” will be proven wrong. 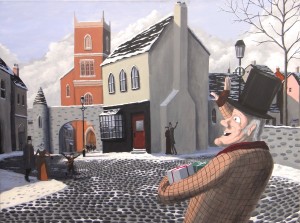 Given the holiday time of year, I’m reminded of the role of the Ghost of Christmas Yet to Come in Charles Dickens’ classic tale “A Christmas Carol,” with Broadcast TV playing the part of Scrooge and Shelly Palmer as the ghost. Says Scrooge Broadcast TV upon encountering   Palmer:

“You are about to show me shadows of the things that have not happened, but will happen in the time before us,” Scrooge Broadcast TV pursued. “Is that so, Mr. Palmer?”

“ Shelly Palmer!” he Broadcast TV exclaimed, “I fear you more than any spectre I have seen. But as I know your purpose is to do me good, and as I hope to live to be another man from what I was, I am prepared to bear you company, and do it with a thankful heart.”

“Men’s courses will foreshadow certain ends, to which, if persevered in, they must lead,” said Scrooge Broadcast TV. “But if the courses be departed from, the ends will change. Say it is thus with what you show me!”

And thus for Broadcast TV enters the opportunity for Next Gen TV to act as the change agent that can alter the course of an otherwise discouraging future, with consumer friendly alternatives to the time-consuming advertising pods and lack of on-demand access decried by Shelly. In fairness, Shelly does acknowledge the likely near-term survival of broadcast TV as a result of live events (using the example of the NFL) and the general pro-consumer nature of free ad-supported content. However, he ends it there and does not delve into the implications of the paradigm-changing nature of an evolved platform for broadcast TV that can seamlessly combine broadband and broadcast services into a simple and satisfying consumer experience. With Next Gen TV capable of combining the best of the traditional broadcast model, which still dominates viewing to this day, with the needs of a transformed consumer audience that expects content to be available on-demand, wherever they are and on any device, perhaps the future is not so dim. Like Scrooge, Next Gen TV can assert itself as the new spirit of Broadcast TV:

“I will live in the Past, the Present, and the Future. The Spirits of all Three shall strive within me. I will not shut out the lessons that they teach.”

And I believe all will go well for Broadcast TV, as it did for Scrooge:

“Scrooge was better than his word. He did it all, and infinitely more.”

I hope you’ve enjoyed my festive take and alternative opinion to Shelly on the future of broadcast television.  It was fun to write. If you’d like to read Shelly’s piece, here is “TV: The Platform vs. The Artform” at shellypalmer.com.

By Lynn Claudy|December 17, 2020|Blog|Comments Off on Broadcast TV (the Platform) and “A Christmas Carol”