The 2019 Automobility LA Show was held just before Thanksgiving, with thirty-four car manufacturers (in auto parlance, original equipment manufacturers or OEMs) displaying the latest and greatest in automobiles. While this show focused primarily on auto “reveals” (introduction of new models), powertrains, and advanced technologies like autonomous vehicles, it also offered an opportunity to assess the state of the car radio.

Long gone are the days when car radios were all virtually the same, with a tuning dial, volume and tuning knobs, “hard” preset buttons, and an AM/FM band switch. Today’s car radios are as varied as the vehicles that house them, and they provide consumers with a wide array of listening choices. Provided here are four examples of modern car radios with a description of each, highlighting some of the features found in today’s autos:

Subaru Outback (starting MSRP $26,645) – This mid-size sport utility vehicle had one of the largest touch-screen displays used in any of the vehicles at the show, not counting electric vehicles like Tesla’s and the new Mustang Mach E (introduced at the Show, not yet available), which have super-sized 15-inch or larger displays used for multiple functions. 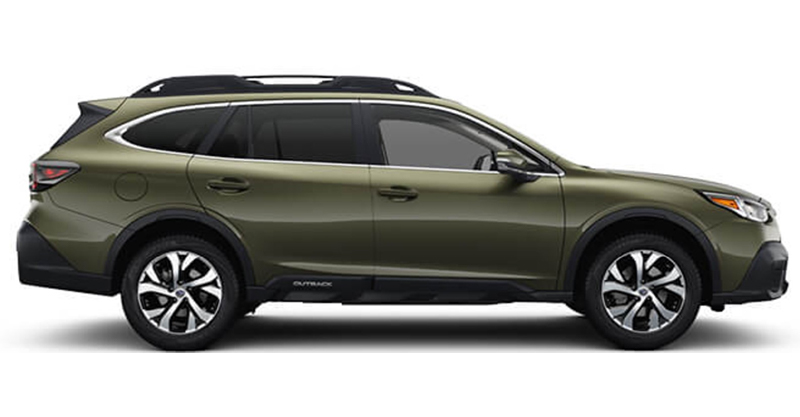 The home screen of the Outback’s display is shown in the photo below. Note that the RADIO soft key is prominent on the upper left. Also visible are the volume and tuning knobs (to the left and right of the display, respectively). While many cars (like this Outback) still have these knobs, more and more vehicles only have “soft key” controls or make use of multi-function “cursor knobs” to adjust volume and tuning. 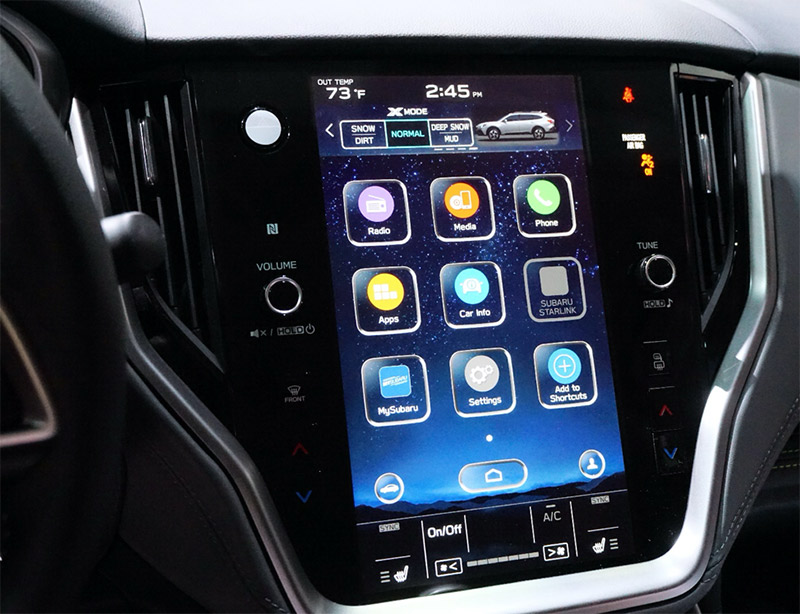 As with most of the radios seen at the Show, three radio bands (AM, FM, SiriusXM satellite radio) are supported, as shown along the top of the display in the next Outback photo below. Also evident here are six radio preset soft keys, the HD Radio indicator (notice the rectangle with the orange “1” and white “2” indicating that this station is broadcasting both a main channel, HD1, and a single HD Radio multicast channel, HD2).  The Outback radio also has a “station list” soft key, which will display a list of the receivable radio stations.

Finally, notice that the station information near the top of the display includes a line of text “MobileWash #1 Car Detailing…” which appears to be an advertisement that the station is broadcasting using the text features of the HD Radio system. This text appears to be truncated (notice the ellipsis) which highlights one of the challenges that broadcasters face when sending text information, namely, that different receivers have different text displaying capabilities, making it difficult to know exactly what consumers will see. 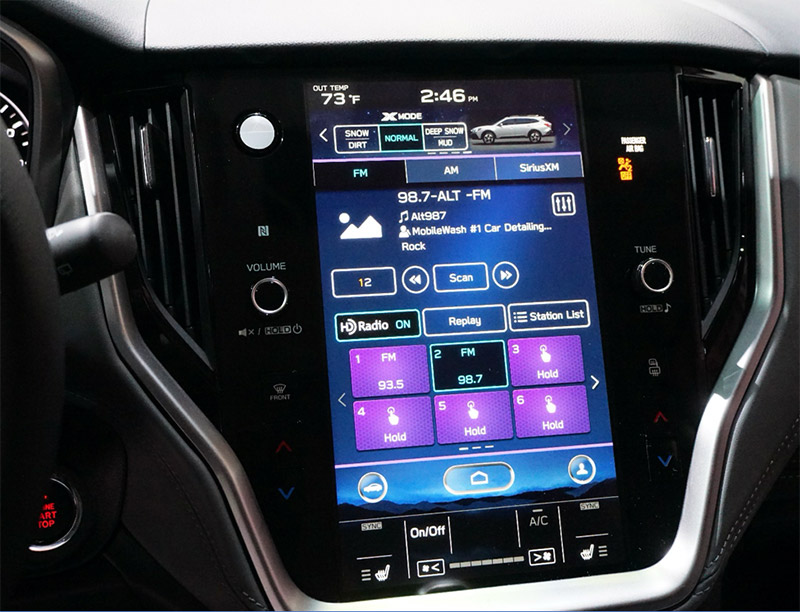 Cadillac CT6 (starting MSRP $58,995) – This is a large, 4-door sedan with an enormous trunk! The Cadillac infotainment system is characterized by unique touch-sensitive controls on which the user slides their finger to make adjustments. 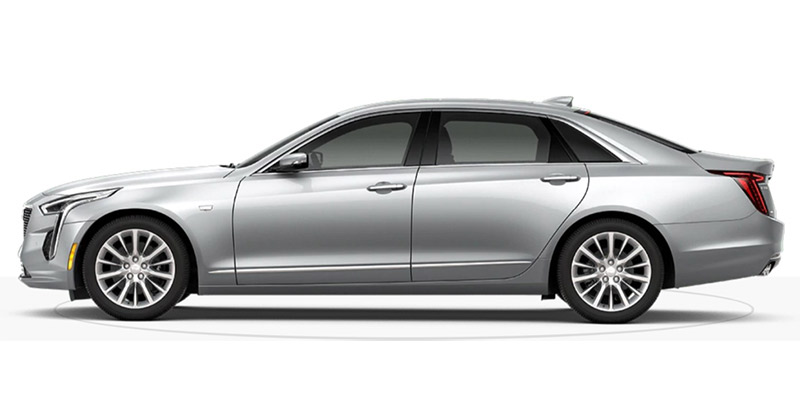 The cockpit area of the Cadillac is shown in the photo below. Notice the two knobs on the center console area (between the seats), which are a multi-function cursor control (large knob) and a volume control (small knob). Cursor knobs are found on many new vehicles and are usually located on the center console where the driver can easily make use of them. Also on the console are hard buttons which can be used to switch between radio stations. 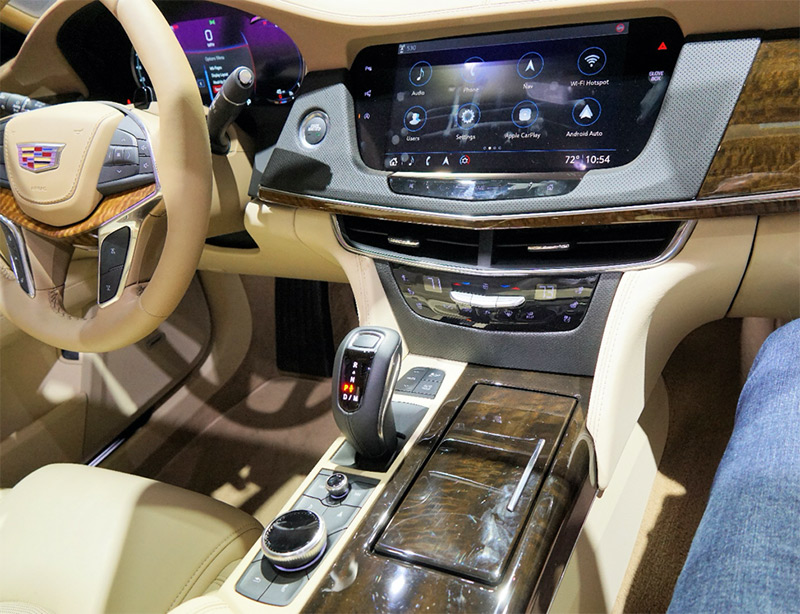 In the close-up view of the display (below) there are band-selection soft keys (AM, FM, SiriusXM) on the left and preset soft keys along the top. Note that these preset soft keys can be set to stations from any of the three bands. When the TUNE soft key is touched, a number-pad display appears, which allows the user to tune to an exact frequency. 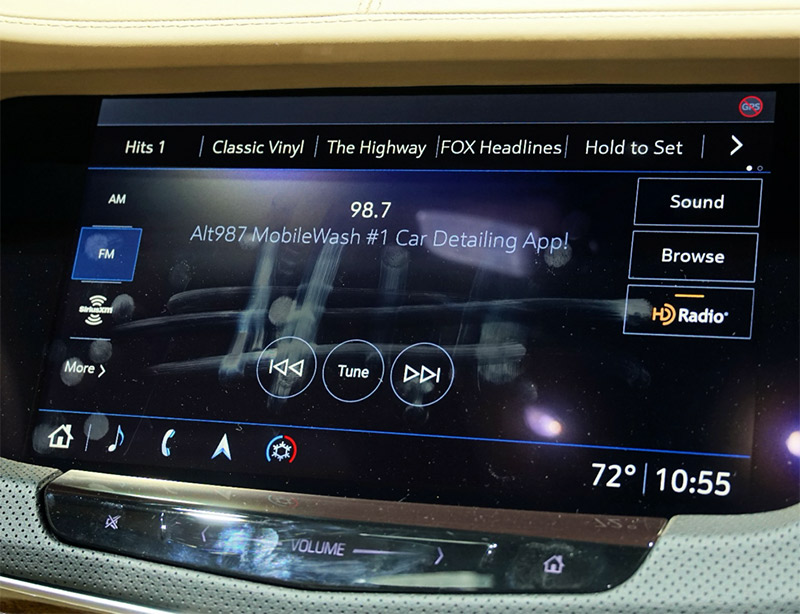 The third Cadillac radio photo (below) highlights the trend among new auto radios to support Android Auto and Apple CarPlay, which give a consumer the ability to connect a smartphone to the car radio and “project” compatible smartphone apps onto the display. Shown is one of the Cadillac radio setting screens, which includes on/off controls for both Android Auto and Apple CarPlay. One of the concerns that radio broadcasters have regarding these smartphone projection systems is that typically, once a user selects either Android Auto or Apple CarPlay, it becomes more difficult to access the car radio tuner controls. 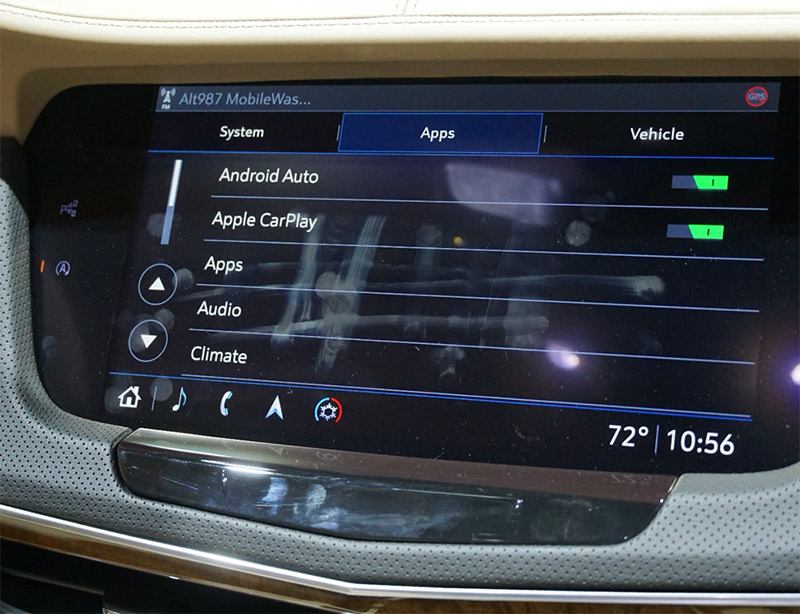 BMW M8 (starting MSRP $133,000) – This is a powerful and sporty two-door coupe, a “high-end” vehicle with a fairly high price tag. One of the distinguishing features of many BMW car radios (this one included) is the use of hard preset buttons which can be seen in the BMW cockpit photo below. Not visible in these photos is the large cursor knob in the M8, on the center console between the seats, similar to the one shown for the Cadillac CT6 above. 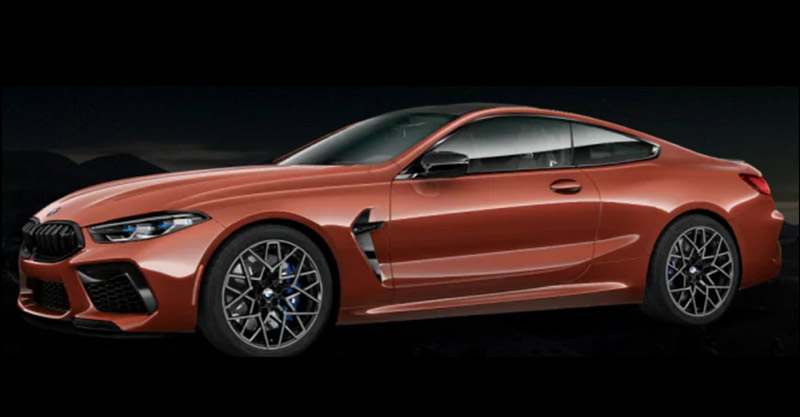 The BMW preset buttons seen below, labeled 1 through 8, are surrounded by additional hard controls, for volume, mode and band (on the left), and for changing the radio station to a higher or lower frequency (on the right). The display in this first photo is showing the station-list feature of this radio. Notice how the “now playing” information is shown on the very top line (KRCD HD2). On the left of the display is an art image and song title and artist information. It looks like this station is not transmitting any HD Radio “Artist Experience” image for this song and the receiver is instead using a default abstract image in its place. 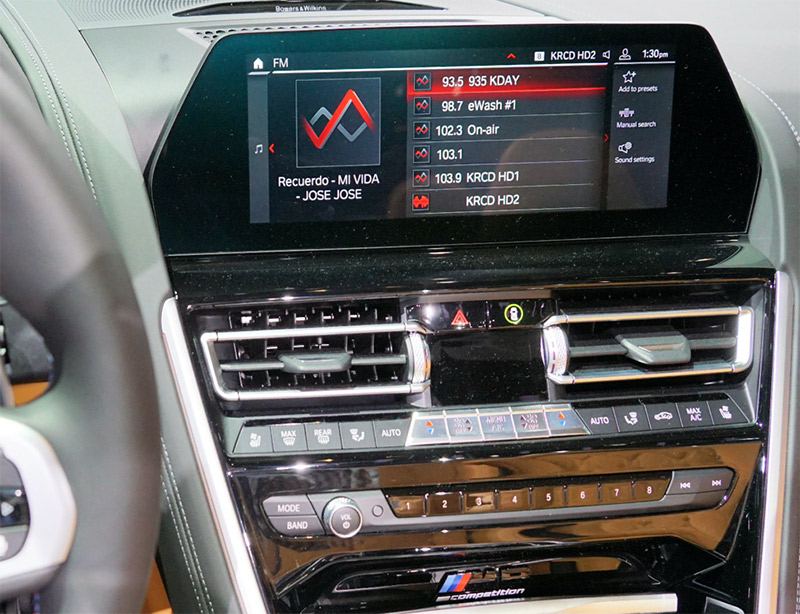 Another artist image is shown on the BMW display in the photo below. Again, this image is likely being supplied by the vehicle itself and not the broadcaster. Many vehicles at the Automobility LA Show included the ability to provide artist images and album art from in-vehicle databases, as well as the ability to capture and store radio station logos for use on the display. Note again that the now playing station information is shown on the very top line of the display. This identification text is taken from the broadcaster’s RDS (for analog FM) or HD Radio data stream. 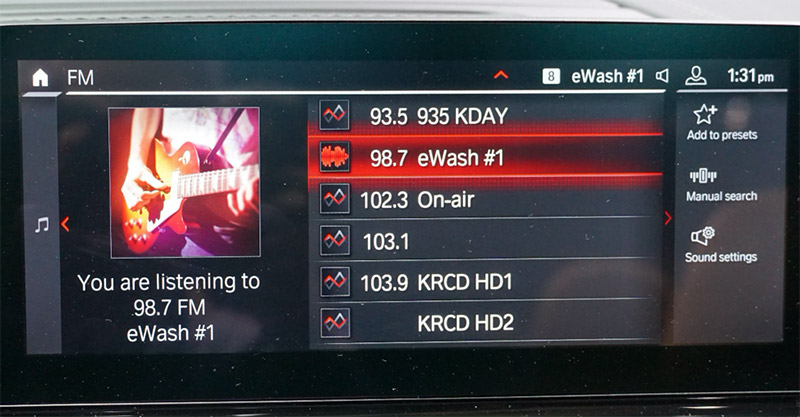 Porsche Taycan (starting MSRP $103,800) – The Taycan is the first all-electric vehicle from Porsche.  Like some other all-electric vehicles (notably from BMW, Audi and Tesla), the Taycan does not include an AM radio. One reason for this is that the electric motors that power the drive wheels generate electrical interference, which is particularly impactful to AM-band radio signals (and much less so to FM-band and satellite radio). Note, however, that many automakers, including Chevrolet, Jaguar, Nissan, Hyundai and Kia do include AM radios in their electric vehicle products. 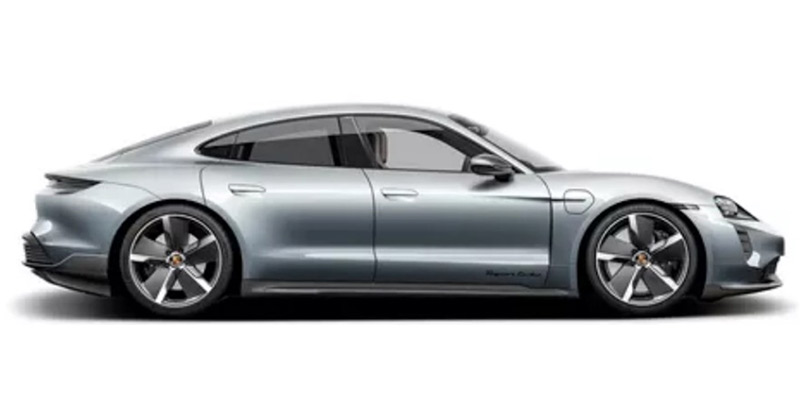 The band selection screen for the Taycan is shown in the photo below. Notice that the choices are “Radio” (which in this case means FM-only), “Online radio” and SiriusXM. The Taycan has internet connectivity built-in, and in fact, the Taycan car radio is a type of “hybrid radio” (i.e., over-the-air plus internet). When users select Online radio, they will have access to tens of thousands of internet radio stations, all delivered to the vehicle using audio streaming over the internet, and subject to mobile broadband data charges. 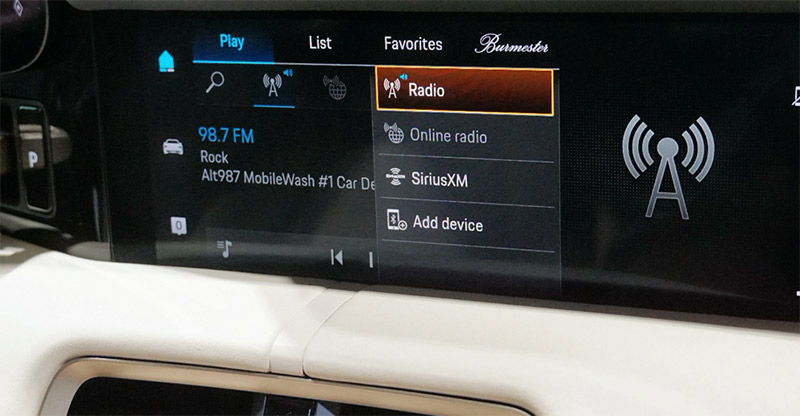 This next photo of the Taycan dash (below) shows a station list for the FM band. Note how the HD Radio multicast channels appear in the list along with main channels, and how some of the stations can be identified by the station logos at left. One way that station logos can be provided to a car radio like this one is over the internet using RadioDNS technology. Briefly, when a radio station is tuned in, the receiver queries the RadioDNS server (using the internet) and if a station is registered with RadioDNS and has logos available, a logo can be uploaded to the receiver and displayed (then usually stored in the receiver for future reuse). Using RadioDNS is probably the simplest and lowest cost way for a broadcaster to provide logos to these hybrid radio receivers. 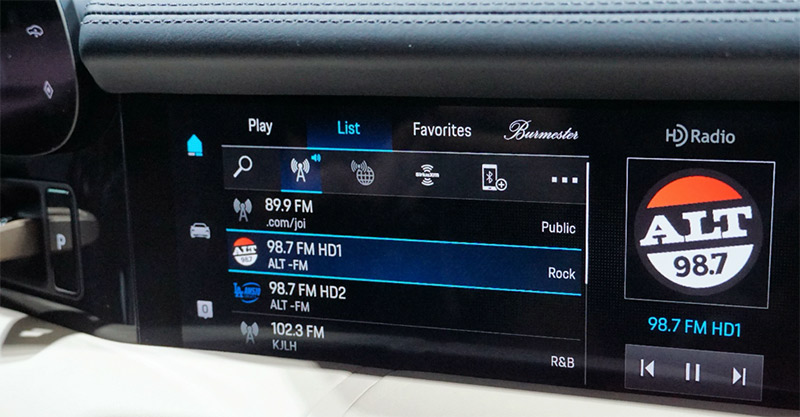 As a final note, there were a lot of amazing vehicles on display at this year’s show, but this author’s favorite, hands down, was the 2020 Corvette! Hailed as the Motor Trend Car of the Year, this Corvette has a new, mid-engine configuration but will sell for 1/2 to 1/3 of similar cars made by Porsche and Ferrari. 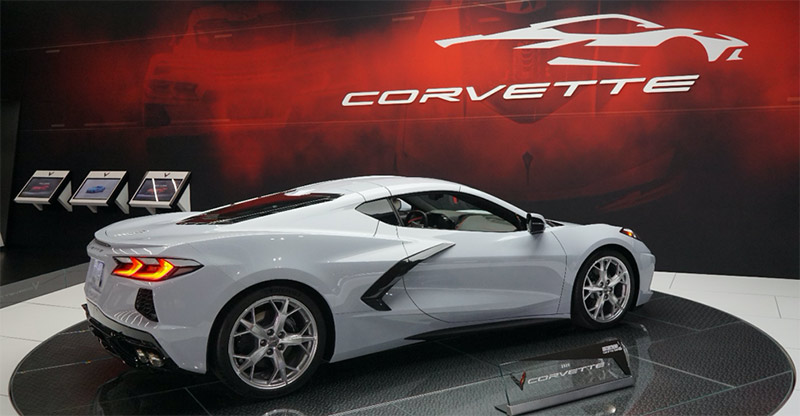 By David Layer|December 13, 2019|Blog|Comments Off on Car Radios at the 2019 Automobility LA Show