CarPlay and Android Auto – Projecting Content to the Dashboard

One of the major trends in broadcast radio right now is the implementation of “hybrid” radio services that are connected to both over-the-air (OTA) and the internet. Audi was the first auto manufacturer to include hybrid radios in their models, and last year, Mercedes Benz S-class models started shipping with a hybrid radio implementation developed by Xperi (“AutoStage”). More manufacturers are expected to join the hybrid radio bandwagon.

Even though the number of true hybrid radios is currently small, consumers are enjoying hybrid radio-like services now using Apple CarPlay and Android Auto technologies, which are included in virtually every new or recent vehicle. These are so-called “projection” technologies which project the content from a smartphone onto the auto infotainment screen.

As long as the listener’s smartphone is connected to the internet, CarPlay and Android Auto make it possible to enjoy podcasts and streaming audio services in the vehicle in much the same way as they would on a true hybrid radio receiver, supporting owned music playback as well. One important difference is that in a hybrid radio, a station’s OTA and internet content are combined in the infotainment system, while with CarPlay and Android Auto it’s an either/or proposition – a listener can listen to OTA radio or to internet-based content, but they are not combined.

In earlier implementations, it was often difficult for users to move between the projection system and the tuner, for example by requiring un-intuitive commands or keystroke sequences. More recently, switching is simpler and in many cases meeting the “no more than 2 clicks” requirement established in the WorldDAB and NABA in-car user experience guideline documents. An example can be found in the 2022 Hyundai Ioniq 5, an electric vehicle with a modern infotainment touch-screen user interface supporting OTA reception and projection smartphone technologies, and featured in a PILOT Blog in February of this year.

With the Ioniq 5, the tuner is exactly 2 clicks from the Android Auto or CarPlay interface. It’s interesting to compare the infotainment display between the two modes, so shown below are a series of images illustrating this, first with an HD Radio display, then the Android Auto home screen, followed by three Android Auto screens when listening to various content. (Additional OTA display images were included in the previous blog post.)

At the 2022 Worldwide Developers Conference, Apple announced that the next generation of CarPlay will be more deeply integrated with a car’s hardware. According to Apple, “Deeper integration with the vehicle will allow users to do things like control the radio or change the climate directly through CarPlay, and using the vehicle data, CarPlay will seamlessly render the speed, fuel level, temperature and more on the instrument cluster.” 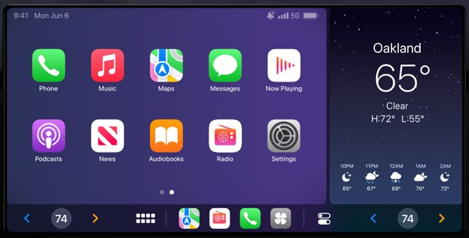 The ”Radio” icon on the next-gen CarPlay display above, when touched, would likely take the user to a native Apple radio interface with access to the vehicle’s tuner, functionality not presently supported by either CarPlay or Android Auto.

Once radio is “brought in” to CarPlay it would in theory be possible to create a hybrid radio experience. For example, the CarPlay radio app could (since it’s connected to the internet) display the station’s logo and other information and access the simulcast version of the station’s content as an audio stream. Hopefully CarPlay will take advantage of the hybrid radio infrastructures available and incorporate features such as this into their app.

It’s likely not all auto manufacturers are happy about the inclusion of projection technologies in their vehicles and prefer it when users have to stick to the user interface native to the vehicle. Despite this, projection technology is in virtually every recent vehicle, and the main reason is consumer demand. Broadcasters need to think about how to drive consumer demand for hybrid radio services, to help ensure a prominent role for radio in automobiles into the future which, like CarPlay and Android Auto, will be driven by consumer demand.

By David Layer|July 1, 2022|Blog|Comments Off on CarPlay and Android Auto – Projecting Content to the Dashboard