Part 1 and Part 2 of this three-part series showed how channel sharing can be used to make RF channels available for ATSC 3.0 services and how MPEG-4 compression can assist in that goal. However, the theoretical modeling used in the examples is based only on optimizing spectrum use, a noble goal which should be encouraged for all spectrum users, and does not consider that there are some current regulatory limitations on pursuing maximum spectrum efficiency.

It may not have seemed like it at the time, but the transition from analog to digital television broadcasting was a lot easier than the current ATSC 3.0 transition, at least from an RF spectrum point of view. The reason was that the larger amount of spectrum allocated to broadcasting at that time made simulcasting analog and digital television on two RF channels technically feasible for every full power television station. It’s hard to believe now, but in the 1950s the television band extended all the way to channel 83, which was reduced to channel 69 in 1983 to provide more spectrum for land mobile operations. At the beginning of the DTV transition, when WRAL in Raleigh, N.C., transmitted the first digital signal on a commercial television station on July 23, 1996, broadcasting still occupied 67 RF channels from channel 2 through channel 69 (not counting channel 37, which was allocated to radio astronomy) for a total of 402 MHz. At the end of the DTV transition, when full power television stations stopped analog transmissions on June 12, 2009, the broadcast band was reduced by 18 channels, to channels 2 through 51, retaining a total of 294 MHz, with the reclaimed spectrum reallocated for auction and public safety use. And after the repacking process associated with the broadcast incentive auction, which started after the auction ended in 2017 and concluded in 2020, the broadcast band was further reduced to channels 2 through 36, retaining a total of 210 MHz. 84 MHz was reallocated in that process by auction to mobile broadband services. But while a total of 175 broadcasters were “winners” in the incentive auction, 30 of those received compensation for moving from a UHF channel to another broadcast channel in the VHF band and 133 indicated that while they were relinquishing their channel, they were moving to a channel sharing arrangement with another channel. Only about a dozen stations actually went off the air completely. All in all, while the spectrum allocated for television broadcast has decreased from 402 MHz in 1996 to 210 MHz in 2022, the total number of full power broadcasters has changed from 1,550 in 1996 to 1,756 in 2022—more broadcasters and less spectrum. The figure below shows this overall trend in chart form, constructed from a few historical data points. 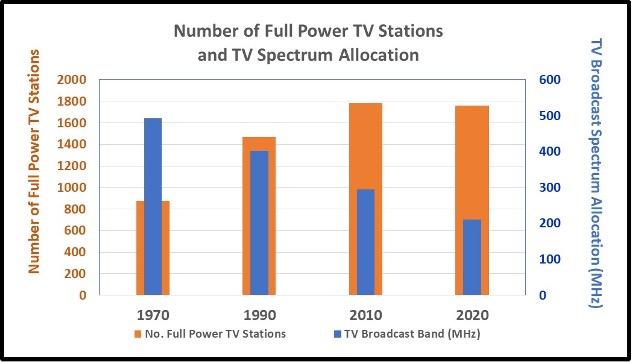 Less spectrum makes the ATSC 3.0 transition quite challenging compared to the DTV transition, given that both ATSC-1 and ATSC 3.0 signals must coexist in the same spectrum band. But one of the policy changes stemming from the incentive auction process, channel sharing, has actually enabled the current state of the transition. Channel sharing was introduced in the incentive auction as a way for broadcasters to relinquish their RF channel for compensation and still stay on the air by sharing another station’s RF channel. For ATSC 3.0, it has facilitated the emergence of ATSC 3.0 “lighthouse” stations, which serve as ATSC 3.0 carriers for the market, with the ATSC-1 services of the lighthouse station moving to other ATSC-1 stations in a channel sharing arrangement and stations sharing the bandwidth of the lighthouse station for ATSC 3.0 services.

The examples shown in the part 2 of this series exploited the channel sharing concept to maximize the spectrum that could be cleared for ATSC 3.0. There are, however, some restrictions on which channel sharing configurations are allowed by the FCC. For channel sharing to be used to fully maximize spectrum efficiency, the FCC would need to allow stations to engage in so-called “lateral hosting.” With lateral hosting, one or more of a station’s 1.0 multicasts are carried on another 1.0 station in the market in order to clear capacity for the first station to host other programming to preserve service to viewers while ATSC 3.0 service is deployed in the market. While lateral hosting arrangements are unlikely to be any broadcaster’s first choice, the Rubik’s Cube nature of the problem of clearing spectrum for ATSC 3.0 makes the use of this tool essential in some cases. For those that seek a deeper understanding of this scenario, broadcasters have provided details in the FCC record of comments in GN Docket 16-142. For example, FCC comments from Bitpath include a long-form explanation on why lateral hosting is a needed tool for broadcasters. NAB has also advocated that a change be made to the FCC rules to regularize lateral hosting– a recent ex parte letter from NAB to the FCC on the subject can be found here using the practical example of New York to illustrate the issue.

Year by year, more and more ATSC 3.0-capable TV sets will continue to enter the retail market. The Consumer Technology Association now forecasts that 50% of new set sales will be ATSC 3.0-capable by the end of 2025. Eventually, all new TV sets sold will be ATSC 3.0-capable leading to the further eventuality that the vast majority of consumers will own one or more ATSC 3.0 TV sets through normal product replacement cycles. And inexpensive converter boxes will be available for those that don’t buy a new TV. At some point, ATSC-1 services will be discontinued entirely, and all RF TV channels will be devoted to ATSC 3.0, maximizing the full potential value of the new technology. That’s not going to happen tomorrow, but it will happen eventually.

The ATSC 3.0 transition has indeed begun—services are now available in markets that include more than 50% of the U.S. population—but there is a long way to go and finding spectrum availability for ATSC 3.0 transmissions is a particularly challenging issue in many of the remaining markets. New regulatory flexibility in channel sharing arrangements and use of MPEG-4 compression for ATSC-1 multicast channels may be important factors in freeing up RF channels for ATSC 3.0 and help fuel a robust consumer transition to the new service. While the optimum time to switch broadcasting entirely from ATSC-1 to ATSC 3.0 is currently unknowable and dependent on many factors, a perpetual hybrid ATSC-1/ATSC 3.0 world would be inefficient from both a spectrum usage and operational point of view as well as a disservice to consumers. It’s time to begin the discussion with the FCC and other relevant parties on the appropriate criteria, metrics and timeline for completing the transition to ATSC 3.0 broadcast service.