ATSC 3.0, the underlying standard for Next Generation TV, could be used to enhance GPS location accuracy, and the enhancement feature could enable a nationwide service.

Accuracy of GPS location, when computed solely by the satellite signal measurements, is about three meters in most cases. The GPS location is computed using the range from each satellite. As the satellite signal travels through the ionosphere and troposphere, it experiences additional delay that varies over time and location. This varying delay manifests itself as range error during location computation, and this range jitter is the main cause of location error when multipath, which is another major source of location error, is not present.

The range jitters can be mitigated by a technique known as differential (or relative) positioning. This technique uses two GPS receivers: one at a precisely known location and the other one at an unknown location that needs to be computed (the “rover”). GPS satellites send signals from about 20,000 kilometers above the Earth’s surface. If the receivers at the known and unknown locations are within a few kilometers of each other, both receivers essentially see the same delay effect caused by ionosphere and troposphere. The receiver at the known location compares its true satellite ranges with the currently observed satellite ranges and thereby estimates the range errors caused by the ionosphere and troposphere at its location and time. These calculated range errors are then transmitted to the rover GPS, which uses them to adjust its received GPS signal to yield a better location estimate.

This idea of differential positioning is decades old, although range corrections have improved over the years, yielding more accurate results. Traditional Differential GPS (DGPS), which measures the range error using code phase, has the potential to compute location within one meter accuracy. A newer relative positioning technique, known as Real-Time Kinematic (RTK), uses carrier phase to estimate the range error, and has the potential to provide two-centimeter theoretical accuracy. In real life, the accuracies of both DGPS and RTK are degraded because of multipath and other factors. Nevertheless, the overall accuracy of DGPS and RTK are still substantially better than the location estimates provided by satellite measurements alone.

ATSC 3.0 can play a role in delivering the range corrections from the known location to the rover. Location of the TV towers are already precisely known (due to regulatory requirements) and fixed. Therefore, a TV station can send the correction data over its RF channel to the rover alongside its broadcast audio-video content. RTCM Standard 10403.1 is the globally used standard for sending the correction data to a rover. If a TV station transmits the RTK measurements in the RTCM format, all the rovers in the coverage area with RTCM-capable ATSC 3.0 receivers can use the information to enhance their GPS location estimates.

ATSC 3.0 has several built-in features to support the transmission of RTCM Standard 10403.1 to the rovers. One method would utilize ATSC 3.0’s support of multiple physical layer pipes (PLPs), each capable of providing different qualities of service. Different error correction codes and layer division multiplexing (LDM) are examples of tools to achieve different grades of robustness in a PLP.  Alternatively, the ATSC 3.0 bootstrap signal could also be used to transmit a specially designed waveform just for the RTCM-GPS receivers. The following figure shows two possible concepts of how RTCM-formatted data could be transmitted in an ATSC 3.0 RF channel. 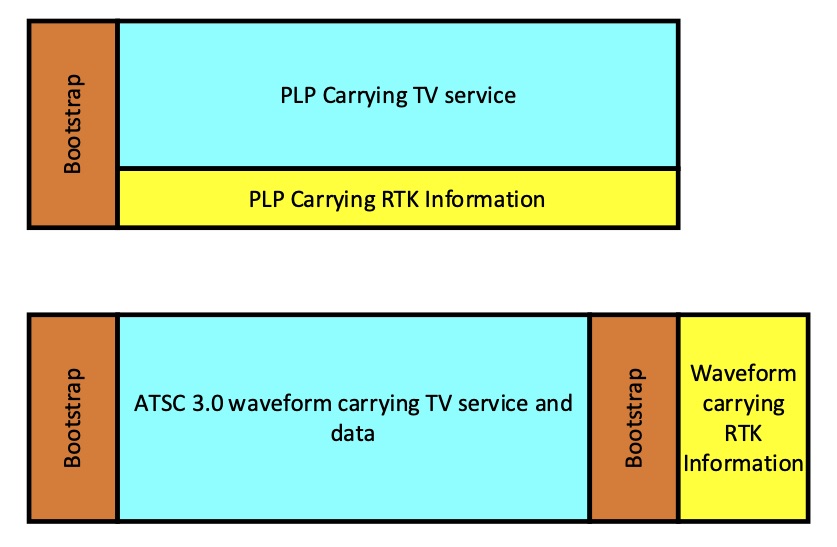 Commercial services based on differential and relative geolocation have been offered in the past. Prior to May 2000, public GPS service was only available under Selective Availability (SA), which introduced intentional GPS location degradation for purposes of national security, with more accurate location delivered under encryption that only secure government and military users could decrypt. During this time, some FM stations transmitted DGPS signals on subcarriers, which were used by U.S. subscribers with specialized FM subcarrier receivers to improve location accuracy. Currently there are many RTK-based services in Europe. Topnet Live, SmartNet, SAPOS, ASCOS, Topcon, APOS and SWISPOS are a few examples. Modern RTK-based services use the cellular network to upload GPS measurements to a service provider, and receive correction data based on measurements conducted over a network of base stations. These services are generally referred to as “network RTK.”

Although the cellular network-based services seem to be popular today, the accuracy and reliability of such services depend on the cellular signal coverage. With the aid of strategically deployed single-frequency networks (SFNs), ATSC 3.0 coverage can be made more robust and reliable than the cellular signals in many cases. This might provide an opportunity for broadcasters to offer a better and more ubiquitous service to the public. As with the FM subcarrier services of the past, such location accuracy enhancement could also be provided as a subscription service, providing an alternate revenue stream for stations.

The versatility and flexibility of the ATSC 3.0 transmission system makes the standard a good candidate to provide nationwide, RTK-based geolocation service in the U.S. If TV broadcasters want to provide such a service, ATSC 3.0 could easily enable it.

By Tariq Mondal|September 2, 2020|Blog|Comments Off on Enhancing GPS Location Accuracy with ATSC 3.0