The in-band/on-channel (IBOC) digital radio system used in the USA (called “HD Radio™”) provides benefits to broadcasters and listeners alike. Like other digital technologies, it is a flexible and configurable system allowing broadcasters to offer a variety of services and (for the FM-band system) multiple audio channels.

Recently, PILOT, working with HD Radio developer Xperi and transmitter manufacturer Nautel, conducted laboratory tests on a mode of operation that promises to further expand the FM-band system capabilities by providing an additional 25 kbps of throughput. The mode tested, called MP11, is not supported by existing receivers but it is part of the original FM-band HD Radio system design and conceivably could be included in new receivers in the not-too-distant future.

Shown in the table below are the modes of operation for the FM-band HD Radio system, primarily distinguished by data throughput (in kbps) and occupied RF bandwidth (in kHz).

FM-band IBOC modes of operation – note that in this context, hybrid refers to the present of both digital and analog signals.

MP1 and MP3 are the modes most commonly used by broadcasters today, especially MP3 which provides for an additional 25 kbps over MP1, allowing for additional services. The illustration below, depicting the FM-band IBOC signal spectrum, shows the relationship between the analog signal (in the center) to the IBOC digital sidebands. 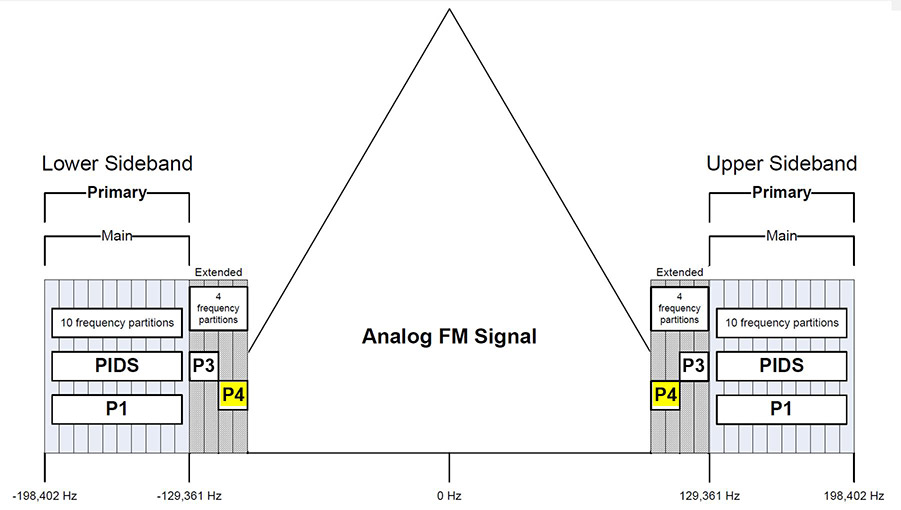 FM-band IBOC signal spectrum for MP11 mode. Partitions labeled “P4” are unique to mode MP11 and increase the digital signal capacity by 25 kbps for a total capacity of 148 kbps.

These sidebands are segmented into separate partitions, each one a group of orthogonal frequency division multiplexing (OFDM) RF carriers, which together form the digital signal. The P1 partitions form an MP1 signal while the P1 and P3 together form an MP3 signal. By adding the P4 partitions, the MP11 signal is created, with a total throughput of 148 kbps, the highest available.

Two specific aspects of MP11 performance were investigated under this project:

PILOT contracted with the engineering consulting firm of Cavell, Mertz and Associates (CMA) to conduct laboratory tests to investigate this performance. To do this, CMA used the PILOT radio test bed (see photo), constructed for NAB in 2014 and hosted at the CMA facility in Manassas, VA. Assisting in the planning and execution of this testing, as well as in the evaluation of the results, were engineers from Xperi and Nautel.

Additionally, Xperi and Nautel provided test equipment which was integrated into the PILOT radio test bed for the duration of the project. Nautel developed a piece of special test equipment (STE) which was used to generate the MP11 waveforms; Xperi loaned NAB a special test receiver which provided audio frame error rate information on the digital sidebands, making it possible to evaluate the extent to which the analog host was impacting digital sideband performance. 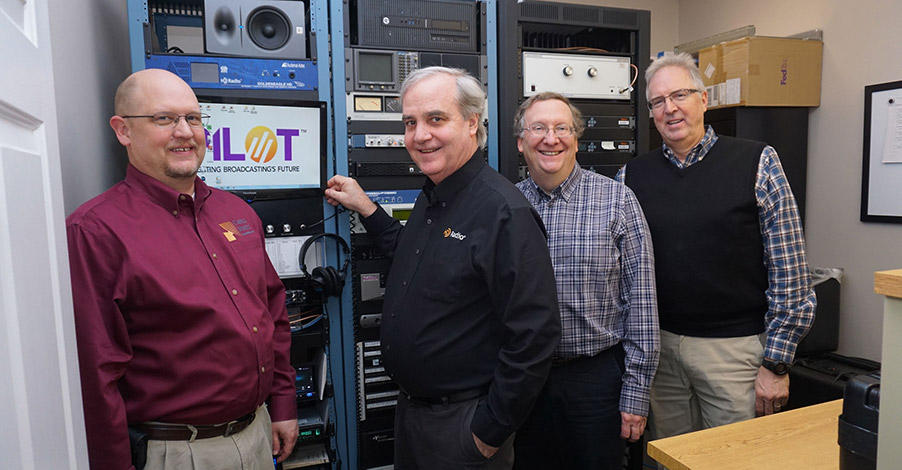 Testing was conducted in two phases, the first to evaluate digital interference into analog (D-A). The goal here was to assess the impact of the MP11 digital sidebands on the audio quality of the analog host. To do this, the analog host audio signal-to-noise ratio (SNR) was measured under a variety of conditions, in particular for system operation using mode MP1, then MP3, then MP11. The results of these tests (shown below) were compared and the differences in the audio SNR as a function of which digital mode was in use were observed.

In the second phase of testing, analog interference into digital (A-D) was evaluated. Specifically, the audio frame error rate of the digital signal partitions was measured, again under a variety of conditions, for the MP11 and MP3 modes of operation, and the differences between the performance of the two modes were observed. These tests were done using a variety of audio program formats (including Classical, Urban, CHR, and no modulation) since the amount of analog interference experienced by the digital sidebands will be different for different audio formats.

Another important variable in the A-D tests was the method of peak-to-average power ratio reduction (PAR) utilized by the transmitter. PAR technology is used in IBOC transmitters to help minimize the IBOC signal peak-to-average power ratio, allowing broadcasters to obtain the maximum power efficiency from their equipment. For these tests, two algorithms were tested, called PAR1 and PAR2. These were both developed by Xperi; PAR1 was the original algorithm used in HD Radio transmission equipment and PAR2 is a more advanced algorithm which performs better but requires more computational power than does PAR1.

As expected, the D-A test results demonstrated that the MP11 mode of operation results in a reduced audio SNR in the analog host (see bar graph below). However, in listening to audio recordings corresponding to these various SNRs, the test crew established that the differences in SNR shown in the graph were not noticeable under normal listening conditions.

Inspecting the graph, it is clear that the MP11 sidebands result in the lowest analog host audio SNR, while the MP1 sidebands result in the highest (best) analog host audio SNR. A variety of consumer receivers were used in these tests representing different price points and different tuner ICs, so as to assess performance across a range of devices. 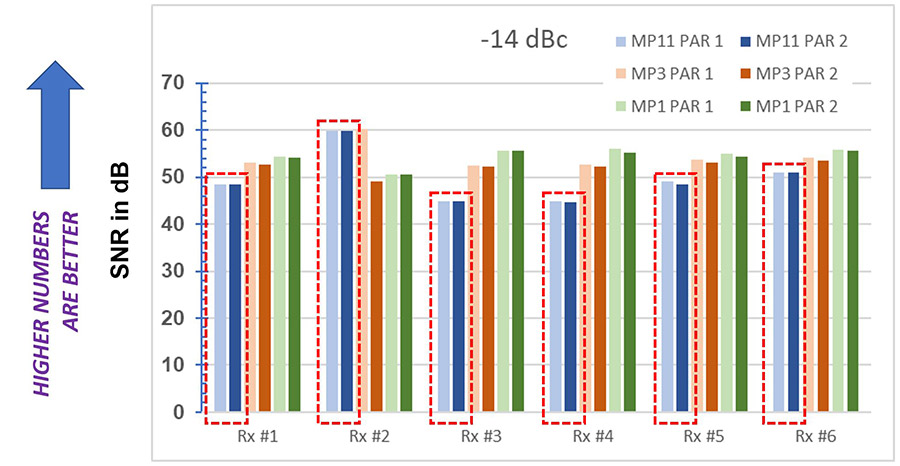 Test results – digital interference into host analog (D-A). Results are show for five different receivers for MP1, MP3, and MP11 modes of operation and for signals using PAR1 and PAR2 transmission processing. The MP11 results are marked with the dashed lines.

Results from the A-D tests are more complicated and are shown in the error rate graphs below. These graphs show audio frame error rate (vertical axis), obtained using the Xperi test receiver, as a function of Cd/No (horizontal axis), a measure of RF signal-to-noise ratio, where the larger the value of Cd/No, the lower the noise power and the greater the signal power. For these graphs, in general, the lower a curve is on the graph, the better the performance represented by that curve.

The results in the first graph were obtained when using the PAR1 algorithm on the transmitted signals, for two different digital signal power levels (-14 and -10 dBc). These power level numbers represent the relative power in the digital and analog portions of the IBOC signal; in the -10 dBc case, the digital signal is more powerful (than in the -14 dBc case) and consequently the analog interference should be less noticeable. 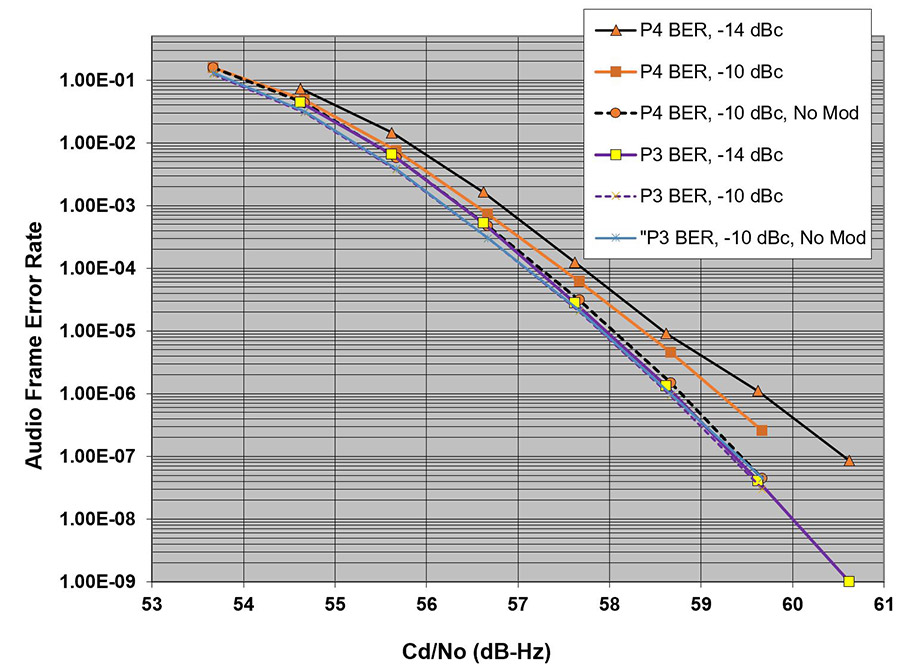 Test results – analog interference into digital sidebands (A-D) using PAR1. For this data, the smaller the error rate for a given Cd/No, the better the performance. Tests were conducted using two digital signal power levels, -14 and -10 dBc.

Referring to the first graph, a couple of observations may be made:

The second graph includes data obtained using signals processed with the PAR2 algorithm which, as discussed above, is more advanced (and better performing) than PAR1 but which requires greater computational power. Comparing the results between the two graphs, it is clear that the PAR2 algorithm results in very similar performance for the P4 (MP11) and P3 (MP3) modes of operation. In the second graph only the -14 dBc power level is shown since even in this worst case (compared to -10 dBc), performance between P4 and P3 is so similar. 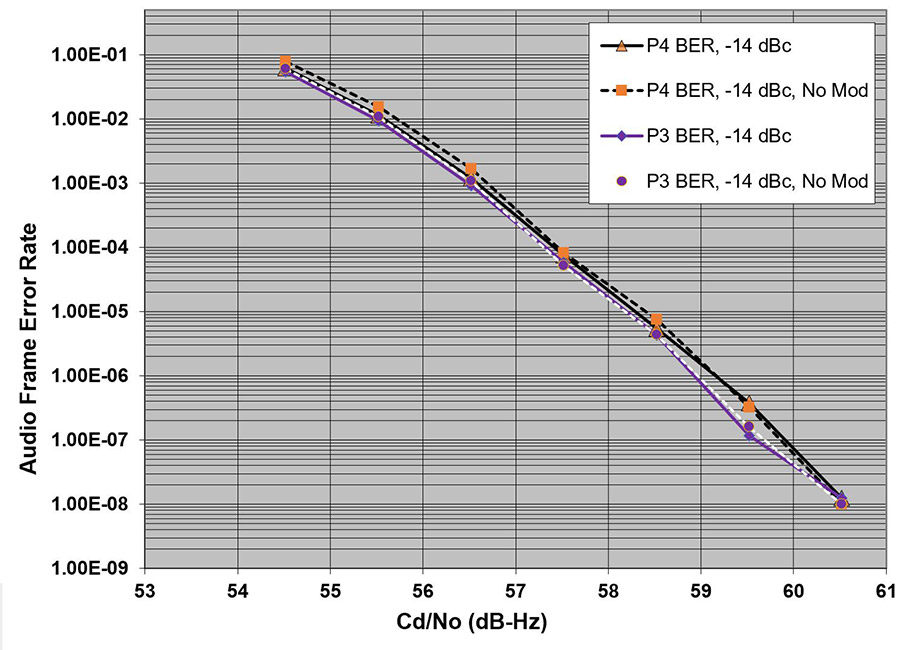 These tests have demonstrated that MP11 is a viable mode of operation:

PILOT is grateful to its partners, Xperi and Nautel, for their participation in and contributions to this project, as well as to the exceptional support provided to the test team by Cavell, Mertz & Associates.