When Sam Crane was in eighth grade, he sent a twelve-page proposal to a program at MIT for using drones in agriculture.

“They rejected it, so I started building my own drone. I put up videos in high school of me listening to Arcade Fire and building more drones,” Sam said. “I have always really been into drones and robots in general. I think they are pretty sweet.” 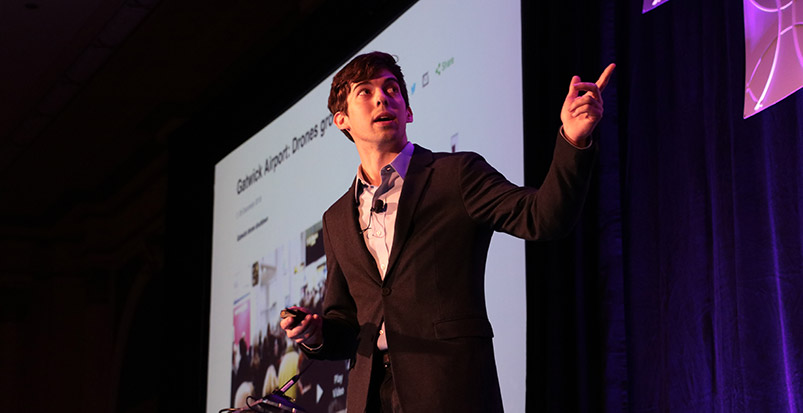 Sam’s love of drones led him to Georgia Tech Police Department where, in his junior year of undergraduate, he discovered a growing need for registration assistance with drones in the Atlanta area.

The FAA has done a good job so far of making the registration of drones easy and accessible, but it manages the license from a top-down model, according to Sam. This at times leaves local law enforcement out of the loop.

Sam, a Computer Science major, developed a software called Fly Right that streamlines the process and allows local law enforcement to know which drones are flying in the area and why.

“Drones have huge impact on media and entertainment and there needs to be something to make it easier,” Sam said. “Journalist do not care about the technology as much as I do, but they do care about the story and Fly Right allows them to continue to focus on the content.”

Sam see drones as a transformational technology that creates an economical way to show a different angle of the story. Fly Right cuts through the noise of paperwork and registration allowing broadcasters to focus on the story.

“We haven’t seen everything that is going to happen,” Sam said. “I see it as the bridge between government institutions and local police forces. If a broadcaster wants to get content, I want Fly Right to be the way to make sure all of “t’s” are crossed and “i’s” are dotted.”