FM 8th Harmonic Interference to Wireless Facility Not Radiated by the FM Station: A Case Study

It is well-known that 7th and 8th harmonic FM broadcast emissions have been a source of contention between cellular carriers and FM stations. Such harmonics are rarely radiated from the broadcast antenna itself. Usually, the cabinet radiation of the FM transmitter is seen as the culprit, even if the cabinet radiation is within the Part 15 specifications.

A session at this year’s NAB Broadcast Engineering and Information Technology Conference (BEITC, May 13-14 2020) entitled “New Spectrum Issues” includes a paper, excerpted here, discussing a radio station in Massachusetts that was accused of causing 8th harmonic interference. This paper is entitled “FM 8th Harmonic Interference to Wireless Facility Not Radiated by the FM Station: A Case Study,” and was authored by David Maxson, co-founder, Isotrope, LLC, Medfield, MA.

In 2018 a wireless service provider (WSP) notified an FM station operating on Cape Cod in Massachusetts that there was interference from the FM transmitter on the WSP’s frequency. The WSP frequency is the 8th harmonic of the FM frequency. To simplify the math, a frequency of 100 MHz is used in this paper as a proxy for the station’s frequency, with a nominal 8th harmonic at 800 MHz cellular systems occupy channels in the 700 and 800 MHz bands, among others. The process of resolving the issue took a year and a half and involved the U.S. Federal Communications Commission (FCC).

7th and 8th harmonic FM interference to cellular services is a well-reported phenomenon. Around 2013, newly repurposed TV channels acquired by wireless carriers at auction were inaugurated to launch 4th generation LTE wireless technology. The harmonic interference phenomenon was previously identified in the 800 MHz cellular and specialized mobile radio bands, which have been in operation for decades. The more recent inauguration of LTE services on the new 700 MHz frequencies created a rash of new interference complaints.

The radio station in question was collocated with the WSP in 2009, well before the 700 MHz wireless auctions.  The mounting arrangement on the tower is shown below. This is an unusual arrangement; typically, wireless antennas are placed above or below FM antennas, which increases the electrical isolation between them. The affected frequency is in the 800 MHz legacy wireless bands, so the WSP has been coexisting with the station for more than a decade. The WSP only recently identified the interference and informed the station.  This paper describes the process and results of the effort to get to the bottom of the issue. 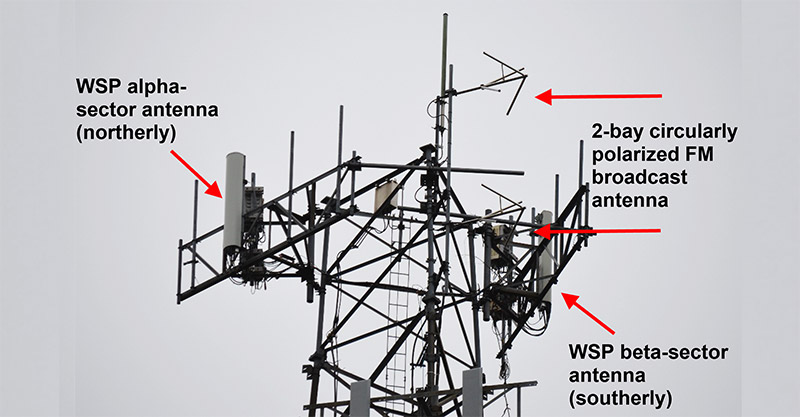 To make measurements that were more consistent and repeatable, the modulation was removed from the FM signal during testing. The conversion to unmodulated carrier increased the WSP noise levels by 6 dB. This is due to the nature of the 8th-harmonic of a modulated signal. The roughly 150 kHz bandwidth of a modulated FM signal becomes 8 times as wide, or about 1.2 MHz.  With the FM signal unmodulated, the full power of the carrier’s harmonic lies within the CDMA channel.

The unmodulated harmonic noise was received at -66 dBm, while the background level noise with the FM transmitter turned off was -88 dBm. Most results quoted in the paper are based on the unmodulated signal measurements, which exaggerates the impact on the WSP CDMA receivers.

Numerous experiments to identify the cause of the interference were conducted (and are described in more detail in the paper) including:

This paper will be presented as part of BEIT Express during NAB Show Express.  It is also included in its entirety in the 2020 NAB BEITC Proceedings, which will be available on PILOT’s website starting May 13, 2020. You will be able to purchase access on the PILOT site.  New this year will be the ability to purchase access to single papers as well as the entire Proceedings.

By David Layer|May 5, 2020|Blog|Comments Off on FM 8th Harmonic Interference to Wireless Facility Not Radiated by the FM Station: A Case Study