PILOT has been tracking the status of FM radio receiver capabilities in U.S. smartphones since 2013, observing sales and pursuing teardown analysis on the top-selling models (i.e., approximately the top 70% of sales, analyzed each calendar quarter). This turns out to be about 20 to 25 different phone models each quarter, which represent the major trends toward FM activation across the industry. (U.S. smartphone sales follow a classic “long tail” distribution, with the volume of models outside the top 70% having negligible impact on overall results.)

PILOT updates this data every quarter, reporting the most recent results on the FM Radio in Smartphones project page.

“Most of the major wireless carriers have now moved to activate the FM chips in their Android smartphones.”

As the figure below indicates, the number of smartphones in which FM reception capability is fully activated by at least one carrier (shown in blue on the stacked columns) has been growing steadily over the three years during which PILOT has tracked the data. 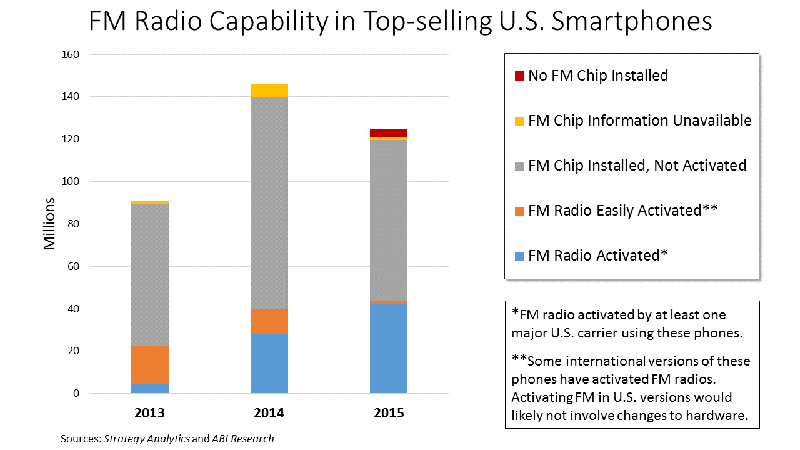 One interesting data point that has emerged in the last year is the appearance of a very few top-selling smartphones without FM chips on board (shown in red above). These remain a small exception, with all other smartphones continuing to include an FM receiver as part of their “connectivity chip” (a single chip or module that includes WiFi, Bluetooth and FM radio capabilities). Nevertheless, it is a critical market element that PILOT will continue to observe closely.

Another trend that promises to be far more impactful presents just the opposite prospects: Most of the major wireless carriers have now moved to activate the FM chips in their Android smartphones, although only Sprint’s activity in this area is evident in the data PILOT has collected to date. (Note the spike in 2Q14 shown in the figure below, when Sprint began selling FM-activated Android phones.) 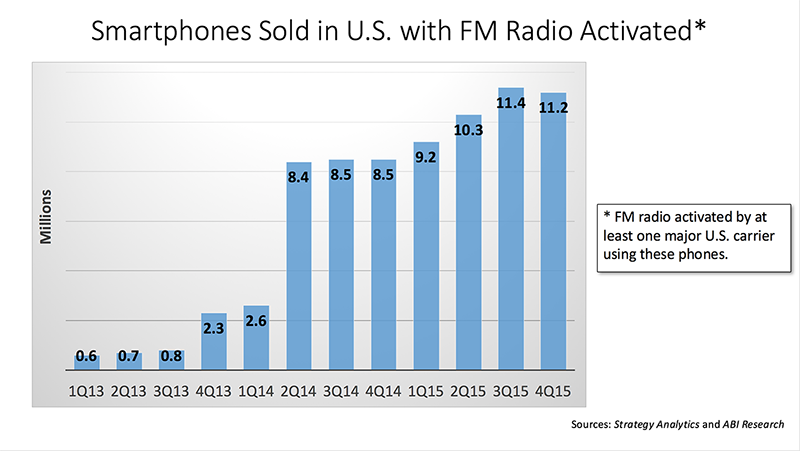 Similar moves by AT&T, T-Mobile and Verizon are not yet evident in PILOT’s data, but should begin to provide similar inflection points in CY 2016 data and beyond, as those carriers activate Android FM receivers.

A final obstacle to full FM receiver activation in smartphones comes from Apple, which has not activated the FM chips on iOS devices, regardless of wireless carrier preferences. (FM chips have been in place on that platform since the iPhone 3GS, introduced in mid-2009). Given that PILOT’s sales data shows that about half of every quarter’s sales of new phones are accounted for by various iPhone models (see 4Q15 data below, for the most recent example), this implies that unless and until Apple changes its policy, FM activation in smartphones can never exceed about 50% penetration in the U.S. Note also that Apple includes an excellent FM receiver in its iPod Nano products, so the company clearly has the resources and expertise to implement such capabilities should it wish to do so. 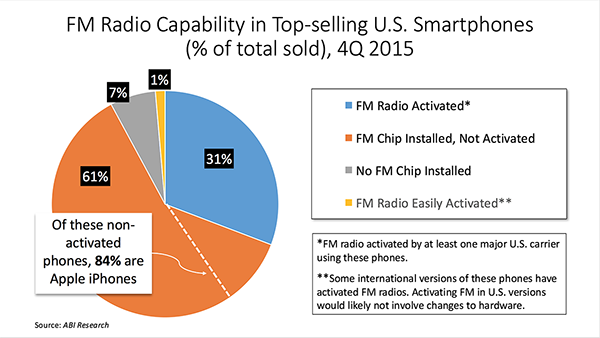 PILOT continues to track and analyze smartphone sales and FM capabilities, and publishes quarterly updates on the FM Radio in Smartphones project page. You can get a more detailed look at PILOT’s smartphone FM activation analysis, with specific teardown results, in our 2015 BEC Proceedings paper.