Freedom of Expression: nēdl Gets the Point of Radio

On any given day in the suburbs of Washington, DC, you could find me staring off into space while listening to disc jockeys over my boom box. Their swagger, humor and willingness to connect with total strangers to bring them joy fascinated me as a child growing up in the 80’s. It’s no surprise then, that I found myself starting a career in advertising sales at WTOP a decade or so later, but it hadn’t yet occurred to me that I would one day help people get on the radio themselves.

In a world where most technology is trying to move past radio or replace it, we actually believe that including broadcasters in our technology is a competitive advantage. – Ayinde Alakoye, nēdl

Today, after 20 years in radio, I’m the Co-founder of nēdl (as in, ‘the haystack’), which is The Search Engine for Live Audio Broadcast – and much more. nēdl lets users search live radio as easily as they search the web, by keyword, and also start their own live broadcasts, which are themselves searchable. Our “big hairy goal” is to democratize access to information, and the microphone itself.

My team and I have watched over the years as radio ownership narrowed along with its appeal. The idea behind nēdl is to broaden radio’s appeal with the voices that can speak through it. In our previous start-up, a lot of our users would ask us how they could get on the radio or start their own streams. We think it’s everyone’s fantasy to be on the radio – to express themselves and be heard. We’re tapping into that now with nēdl. 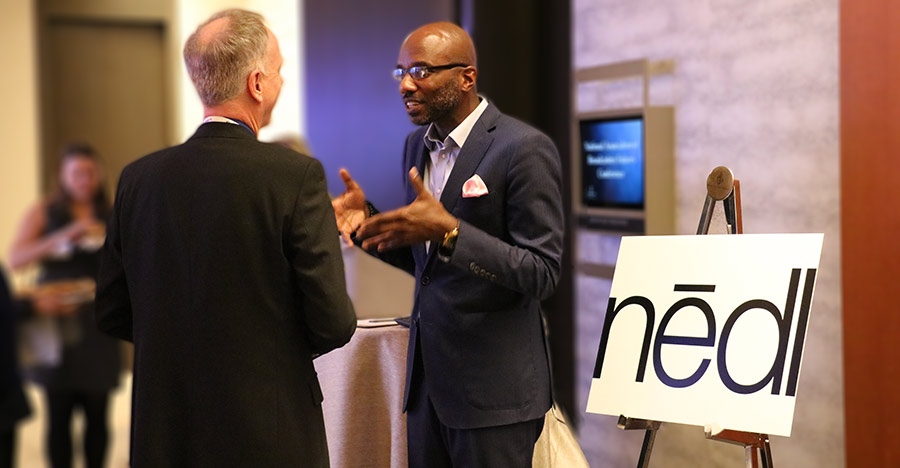 In a world where most technology is trying to move past radio or replace it, we actually believe that including broadcasters in our technology is a competitive advantage. YouTube is a great example of why this might be true. When users search for content, they find user-generated content alongside professional content. We believe the platform is successful because every user has the dream of being as big as the largest content creator, and the larger content creators bring eyeballs back to YouTube. It’s a reinforcing loop that gives everyone more opportunity for viewership. Radio can benefit from the same model. We believe that Radio is already competing for the attention of users on other platforms. Our aim is to leverage this content to bring more listeners and advertisers back to professional radio broadcasters.

In today’s divisive political times, we believe that our technology can also serve to bring people together, expose people to cultures that are not like their own, educate the public on topics from diverse sources, and offer an important communication channel for diverse expression. That’s because each word is weighted the same as the next, no matter who says it. Searching for NAFTA will turn up the person who’s talking about it at the time of your search. The word could be said by NPR, or your next door neighbor.

We’re fortunate to count ourselves among the winners of the 2017 PILOT Innovation Challenge, backed by Knight Foundation. Being a winner validated our mission to serve broadcasters. Since then, we’ve gotten investments from Backstage Capital and Matter.vc, launched on Alexa and gotten featured in the AppStore. We’re also honored to be one of just five companies chosen for the PILOT Pitch Prize finals at NAB Show New York.

For years, search results have been primarily sourced from the recorded web — static text uploaded to the Internet, but as consumers increasingly shift to on-demand audio, streaming services, and voice assistants, radio has a natural place in the conversation. Lumped together, there are hundreds of terabytes of live audio generated daily. How will people search through all of this live audio data and who will be discovered while they are broadcasting their ideas in real-time? We hope you become the first to find out by using nēdl yourself. Our skill (“needle now”) is available on Alexa and in the Apple AppStore.

By Ayinde Alakoye|October 15, 2018|PILOT Pitch Prize, Blog, Innovation Challenge|Comments Off on Freedom of Expression: nēdl Gets the Point of Radio