How Gray Television is Using Innovative Technology to Enhance Its Storytelling

In an effort to help reporters get better content to viewers, Gray TV developed an expansive system dedicated to improving storytelling across the board.

Around 2013, leadership at Gray Television started to feel the need for a more centralized, modern internal system for its stations. The TV broadcast company, which owns and operates in 93 markets, was starting to feel spread thin, its staff unable to support the stations as fully as they wanted to. So, they decided to create a system that would both provide stations with brand new tools to improve their storytelling capabilities and streamline production by making all of those tools available in one centrally located place.

The result was Connect, an internal platform that powers all of Gray’s special applications, such as its live polling application and an election application that manages and displays voter results. “Think of Connect as the main source of all this information being pushed out for our stations,” said Steph McGowen, director of Digital Integration and Over-The-Top, for Gray Television. “With everything that happens in the stations’ day to day, it’s easy to say, ‘OK, now I just need to go to Connect.’”

The myriad applications within Connect are available for all stations to use in order to enhance their storytelling, each one driving innovation forward in its own unique way. Daniel Rivers, a web developer at Gray, said, “We want to put ourselves in a position where we can always improve the lives of our station employees and improve the digital presence of our stations — and also make sure we’re staying ahead of current technology.” 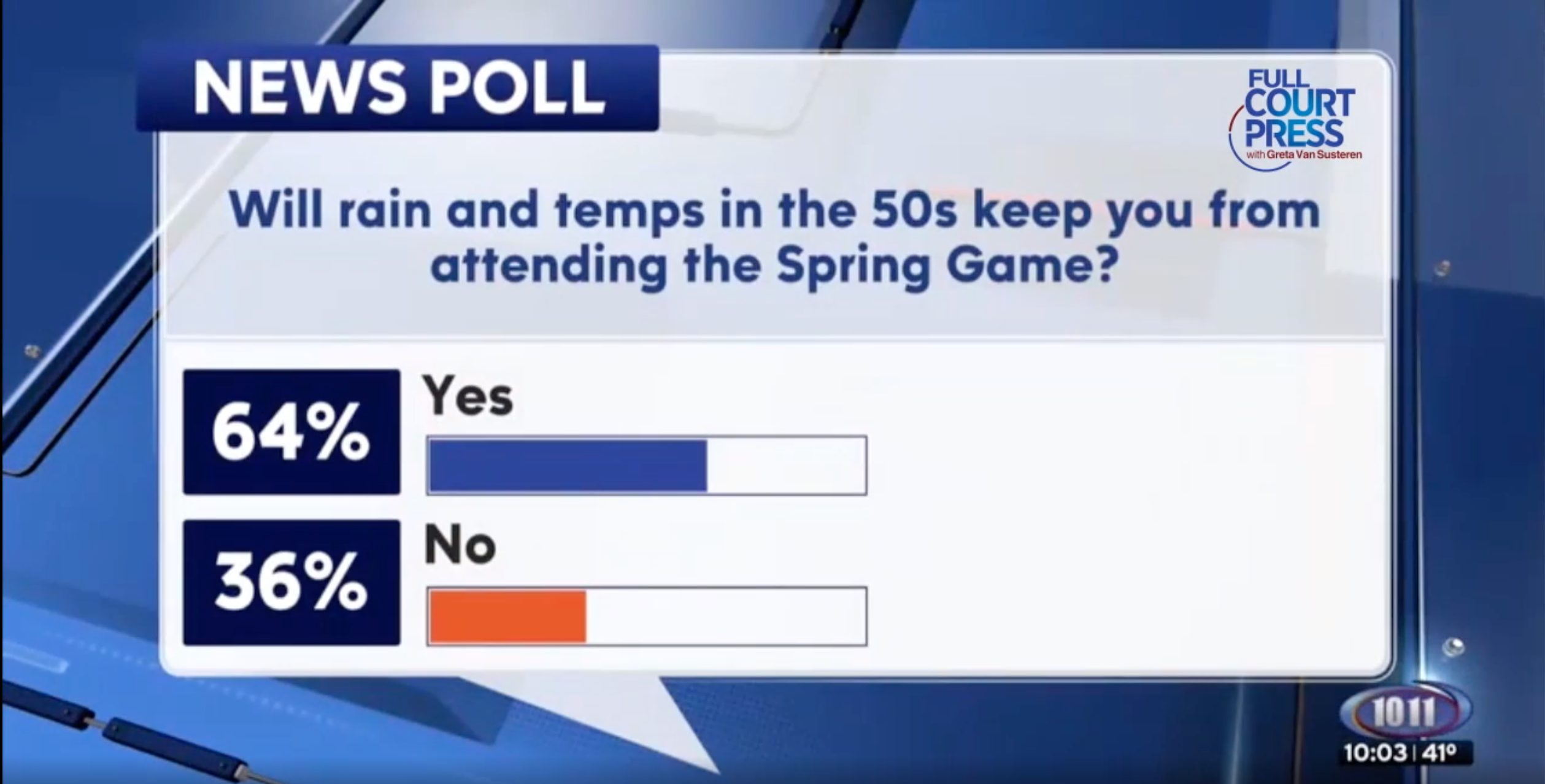 Full-screen graphic that can be used in a newscast to display the poll results.

One particularly popular part of Connect is a live polling application. Any station can create a poll and once it’s live, users are encouraged to vote via Gray’s website or app. Prior to the invention of Connect, the newscaster might have simply announced the results of the poll and pointed to a static image. Now, as people vote, the results update on screen in real time. “That’s more user interaction,” said McGowen. “It’s saying to our viewers, ‘Go to our app and vote, or go to our website and vote and let us know what you think.’ That’s getting the viewer more involved with the newscast,” which is precisely the goal. The polls range from serious to lighthearted, from questions about political candidates to weather preferences, sometimes garnering thousands of responses in under two hours. 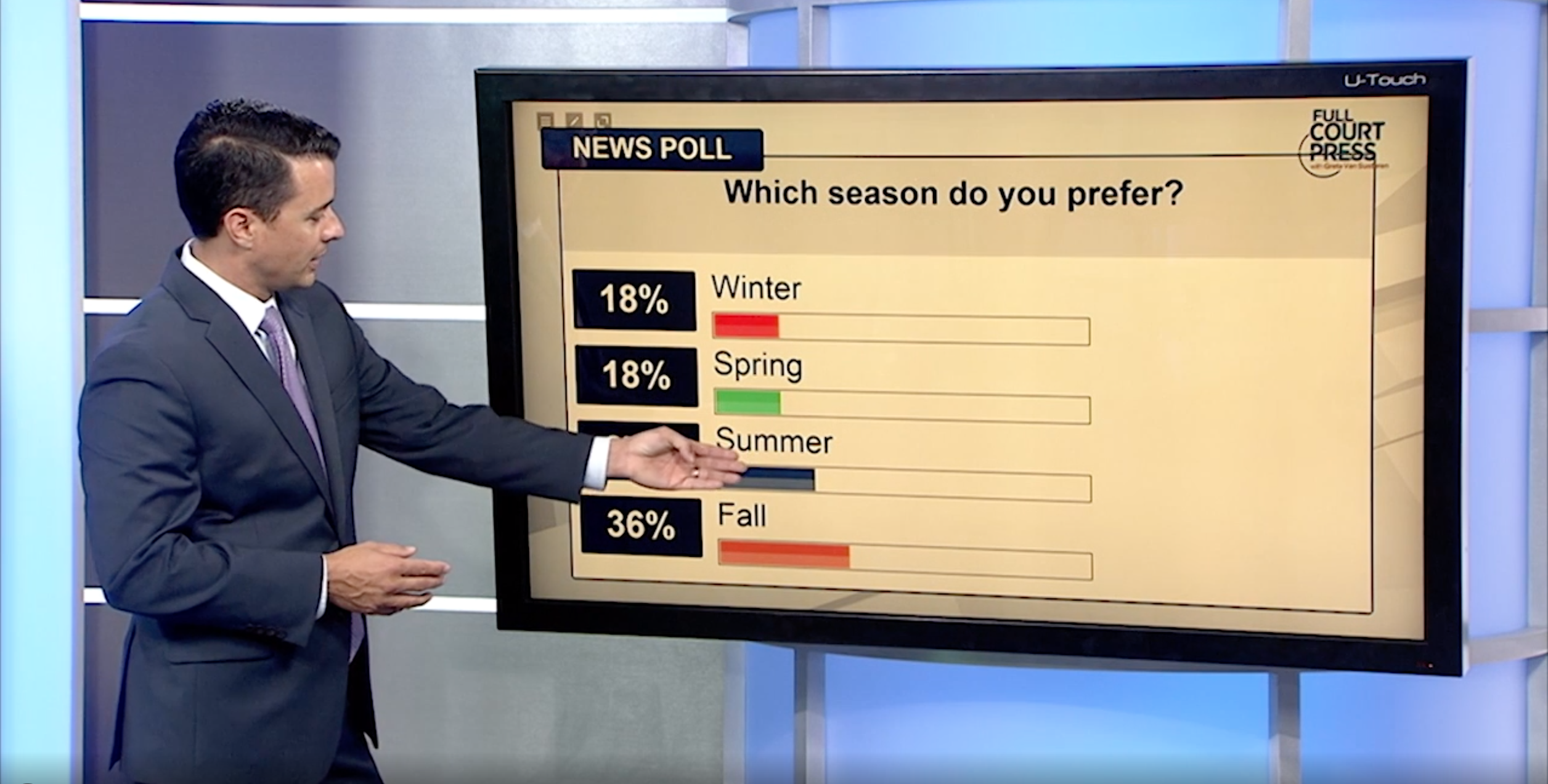 Touchboard application that allows anchors to interact with the results from the poll question.

To add even more texture to the polling results, the stations utilize a touchboard platform that Rivers helped to develop, which allows anchors to interact live with the polls they create, moving them around on screen to help illustrate their points as needed. But that’s just scratching the surface. Within the touchboard platform, there are many additional applications.

One highlight is a conversation module in which viewers can visualize a text conversation that’s taken place between two people on a giant virtual phone. Rather than the conversation taking up the full screen and taking the viewer away from the newscaster, this application allows the newscaster to interact with the conversation itself, scrolling through it and possibly jumping around, as if on a real phone. “It’s not just a reporter talking to you,” McGowen said. “It’s more of, ‘Let’s bring a little bit of interaction into this.’”

Because a lot of the Connect apps were developed recently, station staffers are still being trained and getting comfortable with all the new technology being offered. “They seem hungry for it,” said Rivers, who is not only a developer, but also often the one presenting how these apps work. “When I went around to the stations and did training on this, people were really enjoying it. I got a lot of questions, such as, ‘What if it did this, or what if it did that?’” Rivers listens carefully to the employees’ feedback and takes pride in making adjustments to fit their needs.

As for what’s next, Gray plans to keep on innovating and evolving the applications within Connect. “We’re always working to build more for the stations to help them enhance their storytelling,” Rivers said. “We’re always looking for new things to give them.” We can’t wait to see what they come up with.