TEGNA’s NBC affiliate in Denver is broadcasting interviews live from a studio on wheels. 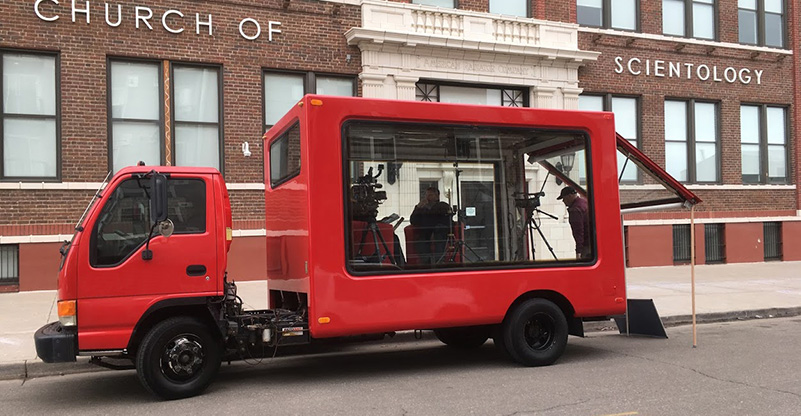 Using its mobile studio, KUSA interviewed a former Scientologist in front of one of the organization’s church

KUSA-TV Denver heard consumers’ call for clarity and transparency in TV news and answered them in a very literal way.

The station, TEGNA’s NBC affiliate in Denver, has started broadcasting full-length interviews in real-time on Facebook Live from a mobile, clear-sided studio, giving viewers a raw look at what transpires in the conversations before they are edited to air on TV. Even more: viewers have the opportunity to actively participate in those interviews, by sending questions of their own that are answered in real time.

The studio itself is, at first glance, as bare bones as it gets in local broadcasting. With see-through walls, the studio, whose newsroom nicknames include “the cube” and “the aquarium”, is just big enough to fit two chairs and a small production crew. Picture an all-window room sitting on a flatbed truck.

But as Jeremy Jojola, the journalist behind “Let’s Be Clear,” said, the impact of the initiative runs deep, bolstering both viewer engagement and TV news’ credibility. Since its launch, viewers have been privy to a live interview with Colorado Gov. John Hickenlooper, who spent much of his time in the studio fielding citizens’ questions. An interview with a former scientologist was conducted right in front of one of the organization’s churches.

“This is all about transparency. This is all about making things clear,” Jojola said, adding that, by doing so, he hopes to allay viewer doubt surrounding short, edited interviews. “It looks different and it feels different…and we have seen the audience respond to it.”