Matheny Explains The Possibilities of Next Gen TV

On June 29, NAB CTO Sam Matheny sat down for a conversation with Colin Dixon, founder and chief analyst of nScreenMedia at the TV of Tomorrow (TVOT) conference in San Francisco, Calif., to discuss the next-generation television standard, ATSC 3.0. You can listen to the audio of their entire discussion above and read more about it on the TVOT website. You can also find out more about NAB’s upcoming Next Gen TV webcast.

Register for the Next Gen TV Webcast 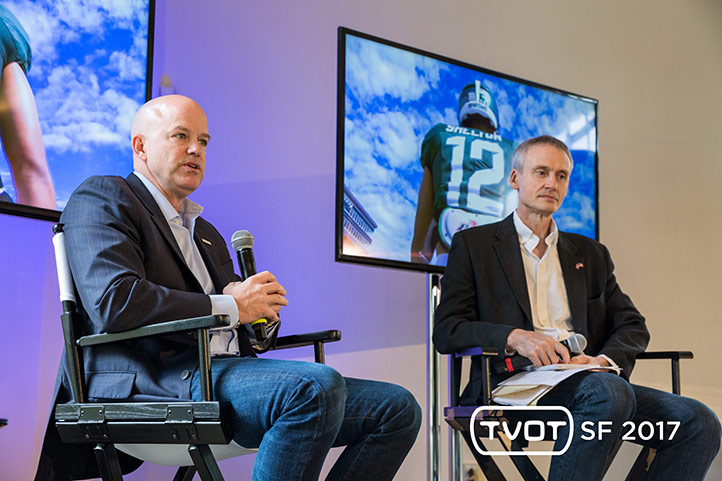 The real power of ATSC 3.0, or Next Gen TV as it is more commonly known, is that it was designed from the beginning to be both a service that combines broadcast and broadband delivery. This means that it is able to leverage the strengths of broadcast, i.e., delivering high quality content to millions of people without worrying about buffering or bandwidth, while providing the interactivity and personalization that users have come to expect from their online media.

“…it’s about making broadcast a part of the network of networks.”

“It’s a fresh start in that regard,” said Matheny, speaking to the packed TVOT crowd. “[Next Gen TV] fully embraces multiple paths, both broadcast and broadband, that will bring new strengths and new opportunities.” He continued, “It’s the first broadcast standard to use IP as its transport layer. So it’s very compatible with what’s taking place with the rest of media distribution.”

Matheny compared this transition to IP as akin to what has happened with telephones. Rather than build custom systems to handle phone calls, companies are leveraging VOIP systems to reduce equipment costs and increase system integration. Similarly, Next Gen TV takes the signals that have been delivered by broadcast only for decades and weaves them into the internet fabric. As Matheny said, “it’s about making broadcast a part of the network of networks.” 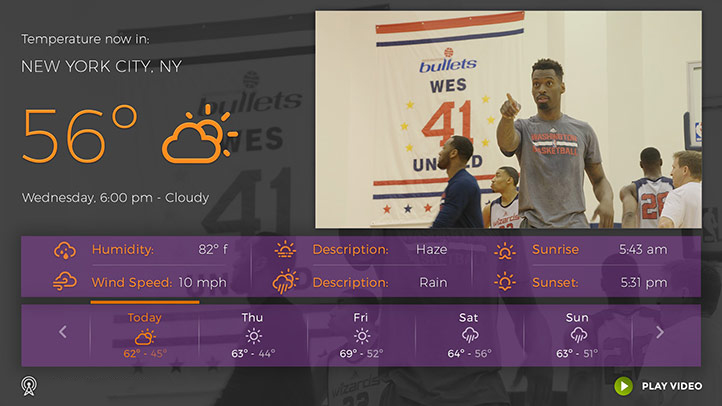 An example weather app from the PILOT Home Gateway

Matheny went on to demonstrate some of these new opportunities by highlighting some of the prototype applications that our partners have developed for the PILOT Home Gateway, including FOX’s multi-view football app, Akamai’s VoD (Video on Demand service), NPG’s (News Press and Gazette) local news VoD, and targeted advertisements.

Next Gen TV is all about possibilities.

The applications are built with HTML 5 and JavaScript, the same tools that web developers use for internet-based websites and applications. The apps are then broadcast over-the-air and/or online via ATSC 3.0 to viewers’ televisions or mobile devices. The apps can then leverage return paths from smart TVs or mobile devices to further interact with the content. While many users will have access to these back channels, those who do not will still be able to gain access to the broadcast apps and watch the UHD content that Next Gen TV also enables.

“We live in a connected world,” said Matheny, “but the standard will work if you’re not connected. You’ll still be able to receive the signal, but there are lots of new opportunities that are enabled with that connectivity.”

Apart from the interactivity and customizability of content demonstrated by Next Gen TV apps, the standard will allow for entirely new business models for broadcasters. Matheny explained how a broadcaster could act as a B2B for a CDN, providing an incredibly efficient distribution path for high-value content, or by delivering software updates to large numbers of people at the same time without slowing down the network.

Next Gen TV is all about possibilities. The combination of the flexibility of broadband, the reach and reliability of broadcast and common web development languages mean that the platform is about to become a powerful place for developers to create innovative new services and technologies.

By Rich Johnson|July 18, 2017|ATSC 3, Blog, Television|Comments Off on Matheny Explains The Possibilities of Next Gen TV