The North American Broadcasters Association (NABA), a trade association dealing with technical, operational and regulatory issues affecting North American broadcasters, recently announced a Recommendation for broadcasters on the use of High Dynamic Range (HDR) technology. The Recommendation says that systems based on an underlying PQ-based HDR transfer function with optional static and/or dynamic metadata be used for ATSC 3.0 program emission in North America. This might require a little bit of explanation for those who aren’t immersed in the details of HDR systems on a regular basis. 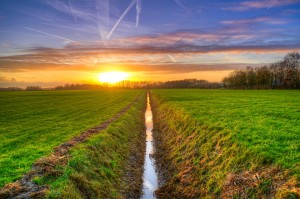 There are two basic HDR transfer functions in use that relate scene light levels to/from video signal representations: Hybrid Log Gamma (HLG) and Perceptual Quantization (PQ). Parameter definitions and other details on the use of these systems can be found in International Telecommunication Union (ITU) Recommendations and Reports. The PQ-based HDR transfer function with optional static metadata and 10-bit coding is commonly referred to as HDR10. Delivery to consumers with HDR10 may optionally include additional static or dynamic metadata, as defined in SMPTE standards. Dolby Vision and HDR10+ are examples of commercial implementations of HDR10 with dynamic metadata, as defined in SMPTE ST 2094-10 and ST 2094-40 respectively. In addition, the SL-HDR1 standard, an HDR system developed by Technicolor based on Standard Dynamic Range (SDR) emission with accompanying metadata used at receivers to reconstruct the original HDR image, can use either PQ or HLG as its underlying HDR transfer function. With the recent September 2021 publishing of the amendment to the ATSC 3.0 video standard incorporating ST 2094-40, all of the above mentioned HDR technologies are now approved and documented options within the ATSC 3.0 suite of standards. ATSC recognized the advantages of adopting a single common HDR format on a regional basis early in the development of ATSC 3.0 and included the following sentence in the A/300 ATSC 3.0 System Standard: “All ATSC 3.0 terrestrial and hybrid television services emitted within a given region should use one High Dynamic Range (HDR) system selected for that region from those defined in A/341.” However, beyond the general recommendation that this should be the case on a regional basis ATSC did not make it a requirement in the standard and did not form any specific recommendations for any of the multiple HDR systems documented in the standard for any particular region.

In the beginning of 2021 NABA formed an HDR Study Group (chaired by the author) to survey and discuss the current and likely future state of the multi-industry landscape on HDR technologies. As opposed to re-animating a debate on the relative merits of the individual systems, the NABA effort looked closely at various allied stakeholder industry perspectives and current practices with respect to HDR, including devices and consumer use, over-the-top (OTT) internet services, multichannel video programming distributors (MVPDs) that retransmit broadcast programs, content producers, and of course, broadcasters. Noting that conversions between systems should be avoided or minimized, especially “round trip conversions” where system A is converted to system B and then back to system A, the goal of the group was to see if any basic agreement could be found on a common format for HDR at emission; i.e., the over-the-air (OTA) RF transmission from broadcasters’ towers, given the larger view of the overall media ecosystem. In looking at the technical performance of HDR systems conversion, and broadcaster “what if” scenarios for adopting HDR solutions, the group evaluated the potential consequences of broadcasters selecting PQ versus HLG-based technology for HDR emission, recognizing that while ATSC 3.0 is broadcasters’ path to HDR, even a rapid rollout will be well behind some of the other sectors.

The result of the group’s media landscape review can be seen in the somewhat busy figure below. Broadcasters are in the middle, in the yellow shaded area, and literally surrounded by sources coming into the broadcast plant as well as signals going out to various distribution paths and end devices. 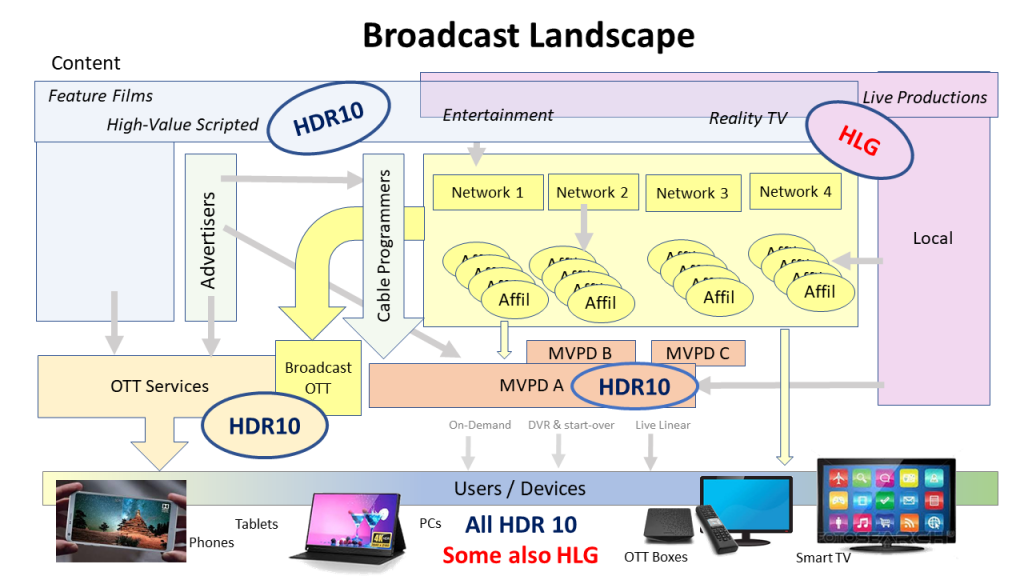 The group made a few observations about the situation of other stakeholders, and are noted in summarized form in the figure:

It was clear to the group that multiple HDR systems will coexist and conversions will be performed. However, any conversion adds complexity and is imperfect. “Round-trip” conversions, described above, should particularly be avoided and round-trip plus additional conversions may reduce quality and introduce color shifts. In general, the group noted that while content can go through a conversion reasonably well under certain circumstances, the typical end result is likely to be the worst aspects of each system – conversion never makes it better.

In the group’s scenario analysis, choosing HLG as an emission format would optimize quality for sports/live content delivered to the OTA audience but scripted TV content would undergo a round-trip conversion for at least some distribution outlets. Choosing HDR10 as an emission format would optimize quality for scripted content delivered via OTA, MVPD retransmissions and OTT, but sports and live content would undergo a single HLG-to-PQ conversion, which can be performed with reasonable results. The study group ultimately reached consensus on a recommendation that would maintain the quality improvements of HDR for the maximum number of consumers under the maximum number of practical circumstances. The recommendation was then refined by NABA’s Technical Committee and its Board of Directors and released at the beginning of August 2021. The full NABA HDR Recommendation is shown below. More information can be found at the NABA website.