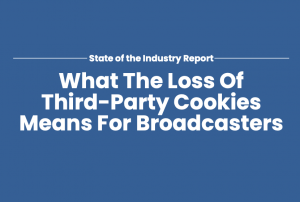 The study, “State of the Industry Report: What The Loss Of Third-Party Cookies Means For Broadcasters,” examined the phase-out of third-party tracking cookies used in digital advertising to estimate the financial impact on broadcasting. The research used interviews with broadcast executives and an online survey of 54 broadcasters to gauge the industry’s level of preparedness and identify best practices among those most prepared for the phase-out, which will be completed by the end of 2024.

In its research, Borrell Associates estimated the immediate elimination of third-party data would result in an annual loss of $1.1 million for the average TV station and over $730,000 for the average multi-station radio market cluster, with these losses possibly 40% larger by the end of 2024. The study found programmatic display and audience extension ads, which are the largest single sources of digital revenue for many broadcasters, would be negatively impacted by the phase-out of cookies, though previous research has found publishers are overestimating their value and profitability.

The study found the phase-out of third-party cookies offers an opportunity for broadcasters to increase their digital advertising revenue by spurring the development of initiatives focused on first-party data, or data that is set and accessible only by a website owner.

“When it occurs, the phase-out of 3rd-party cookies is likely to deliver more benefit than loss to broadcasters,” said the study. “The main benefit may be that it motivates broadcasters to take control of their own audiences by establishing a 1st party relationship with viewers and listeners who’ve remained anonymous for decades. A secondary benefit could be that broadcasters begin reaching beyond their traditional audiences, developing relationships with new audiences altogether — some of whom may reside outside their traditional broadcast geographies. And that could have broad, positive effects that extend well beyond any revenue generated by digital ad sales.”

The study offered broadcasters with proactive measures they can take to mitigate the impact of the third-party cookie phase-out and opportunities for more direct-to-consumer audience engagement. These measures include educating internal stakeholders and securing team buy-in, accurately gauging the urgency and setting a timeline for response, beginning work on a comprehensive plan, starting to prep site visitors and app users, and focusing on the needs of ad buyers.

“The findings should prompt broadcasters to audit and overhaul their revenue strategies. There is an opportunity to get way ahead of the curve to begin direct relationships with listeners and viewers, which in turn will unlock new, stronger revenue streams,” said Gordon Borrell.

In addition to this study by Borrell Associates, PILOT commissioned Omdia to document the impact of GDPR on European Broadcasters. That report, also released today, includes case studies about various strategies which will assist the industry in navigating changes in the digital ecosystem.

“This study provides valuable insight into opportunities for broadcasters to capitalize on first-party data to better engage with local audiences and generate significant revenue,” said John Clark, NAB senior vice president of Emerging Technology and executive director of PILOT. “PILOT looks forward to continuing the work with our partners to ensure that the broadcast industry ready to excel in the next generation of digital advertising.”

This research is part of a six-month program conducted by PILOT, with the support of the Google News Initiative, to help broadcasters with the phase-out of third-party cookies through the implementation of first-party data and direct-to-consumer business models. The initiative, which kicked off in July with 10 NAB member companies, featured a mid-program check-in meeting at Google’s New York offices earlier this week for participating broadcasters to hear from industry experts, share their own experiences and continue working to develop strategies that improve audience engagement.

By PILOT|October 20, 2022|News|Comments Off on New Study Details Impact of Third-Party Data Phase-Out on Local Broadcasting