On Tuesday, March 31, the FCC held their usual Open Commission Meeting as they do every month, where policy actions are considered and voted by the Commissioners. This one was anything but usual, however. In response to current health restrictions on public gatherings, it was conducted by audio conference call and there were no policy actions to consider, all agenda items having been previously adopted by the Commission by circulation. Nonetheless, the occasion of the agendaless meeting launched a noteworthy Notice of Proposed Rulemaking (NPRM) on amending the rules for Distributed Transmission Systems (DTS) to make them more practical in real life (a discussion draft of the NPRM was made available on March 10 but the final text of the NPRM was released late on April 1), an important enabling technology for reaping the benefits of ATSC 3.0, aka Next Gen TV.  The general content of the NPRM is described below, following some background on why pairing distributed transmission system technology with ATSC 3.0 may be one of the best things since sliced bread and toast. 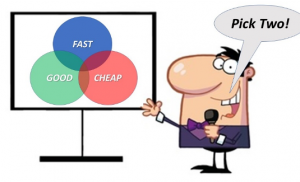 There is an old adage about design engineers discussing tradeoffs with their product managers, with respect to whether a product needs to be available quickly, manufactured inexpensively or designed for high performance: “Good, fast or cheap—pick two.”

Tradeoffs also exist with implementing Next Gen TV service, although the labels are a bit different.

In the figure below, an analogous “pick two” situation exists with selecting the goals for planning an ATSC 3.0 broadcast television service, implemented with a conventional single high-power high-tower (HPHT) transmission architecture. What is ultimately desired is to be able to deliver high data rate signals (think 4K UHD) robustly (think indoor antennas or mobile devices) throughout a TV station’s service area (think 50 miles or so from the center of town). In this configuration, however, at least at the goal extremes, it’s just not possible to simultaneously deliver high data rate, robust reception and full market coverage, although it may be feasible to deliver any two of those combinations. This is due to the general nature of a single transmitter having higher signal level available near the transmitter and the signal weakens as the distance from the transmitter increases. Terrain, large manmade objects and other physical factors can also weaken signals. And make no mistake, it’s all about signal strength. If you’ve got enough, great—if not, you’re sunk, and signals can’t be received. And the higher the data rate, the higher the signal level threshold for successful and reliable reception. 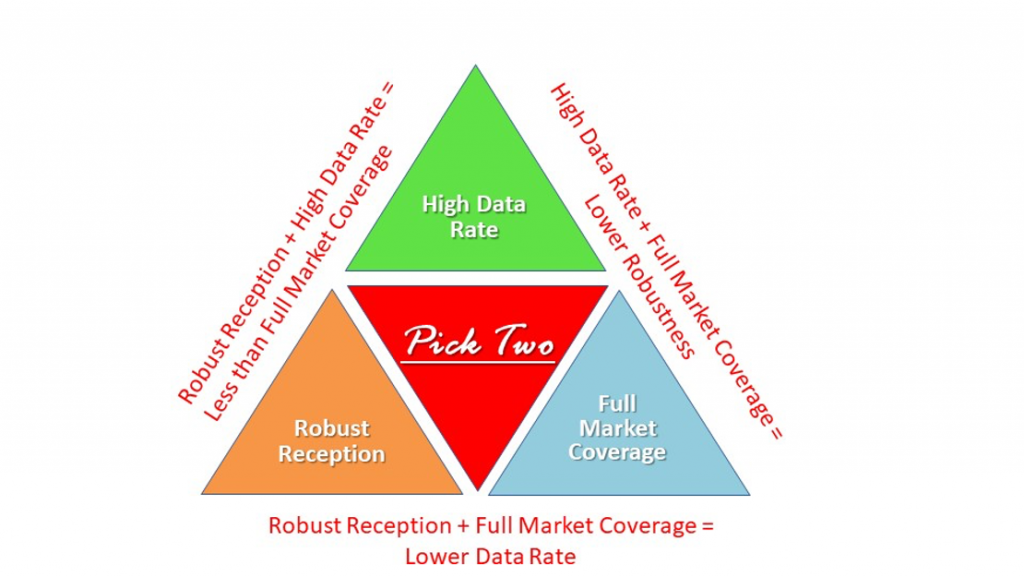 The essential tradeoff of the central single transmission point is shown in the above figure; you can supply a highly robust signal at a high data rate, but only relatively close to the transmitter. Or you can deliver a high data rate signal over the full service area, but it will not have highly reliable reception. Or you can deliver a very robust signal to the full service area but only at a relatively lower data rate. Tradeoffs! Of course this doesn’t mean a single HPHT ATSC 3.0 transmission isn’t good enough for providing a viable and desirable television service, but it does mean that a single tower transmission facility isn’t likely to be able to deliver reliable 4K UHD service 50 miles away to a viewer in their basement watching TV using an indoor antenna.

Enter single frequency networks (SFN), or Distributed Transmission Systems (DTS). Single frequency networks, meaning the use of multiple low or medium-power transmitters, perhaps augmenting a high power high tower transmission on the same channel in a synchronized fashion, are a way to have it all—provide service that features high data rate and robust reception throughout the entire service area. And ATSC 3.0 works really well with multiple synchronized transmitters on the same frequency, better than the current ATSC 1.0 system, due to the multi-carrier nature of OFDM modulation. 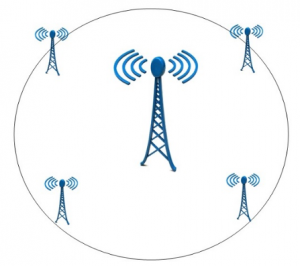 The FCC authorized distributed transmission systems in a Report and Order (R&O) in November 2008, so what’s the problem?

After a LOT of discussion with broadcasters and industry experts, NAB and America’s Public Television Stations (APTS) submitted a Petition for Rulemaking to the FCC on October 3, 2019 offering a fix for this limitation. A picture is worth a thousand words, so below are three figures from the Petition illustrating the problem. The station service area in the figures is defined as the UHF 41 dBu contour (predicted to be the field strength exceeded at 50% of the locations at least 90% of the time), called the Noise Limited Contour (NLC). 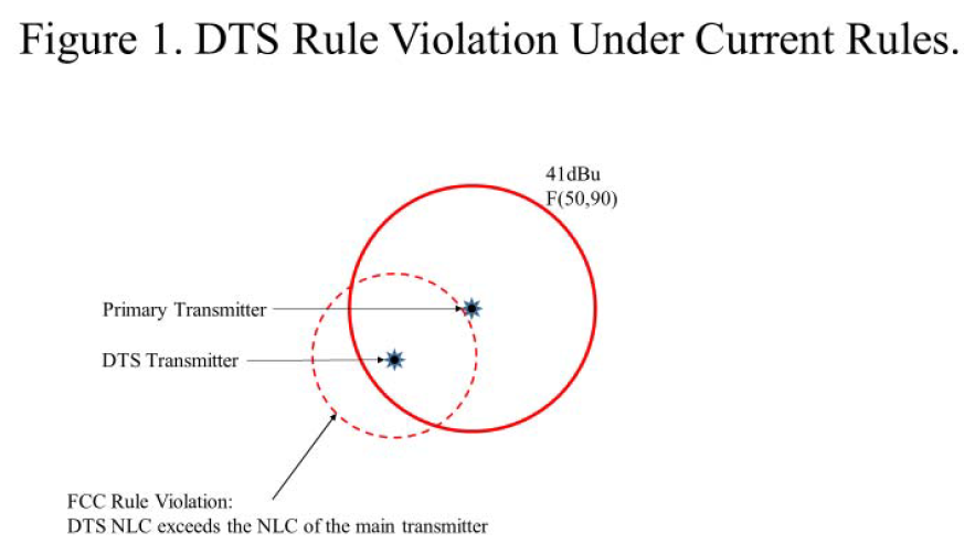 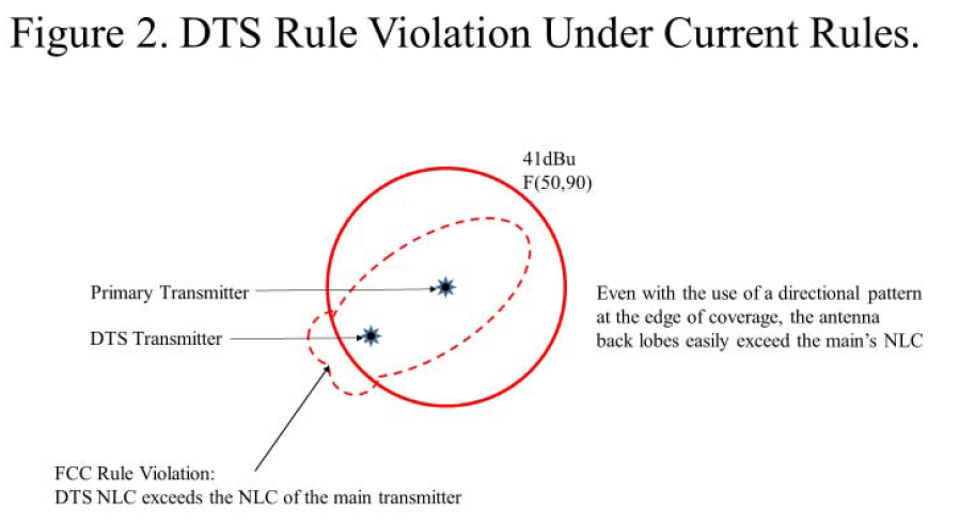 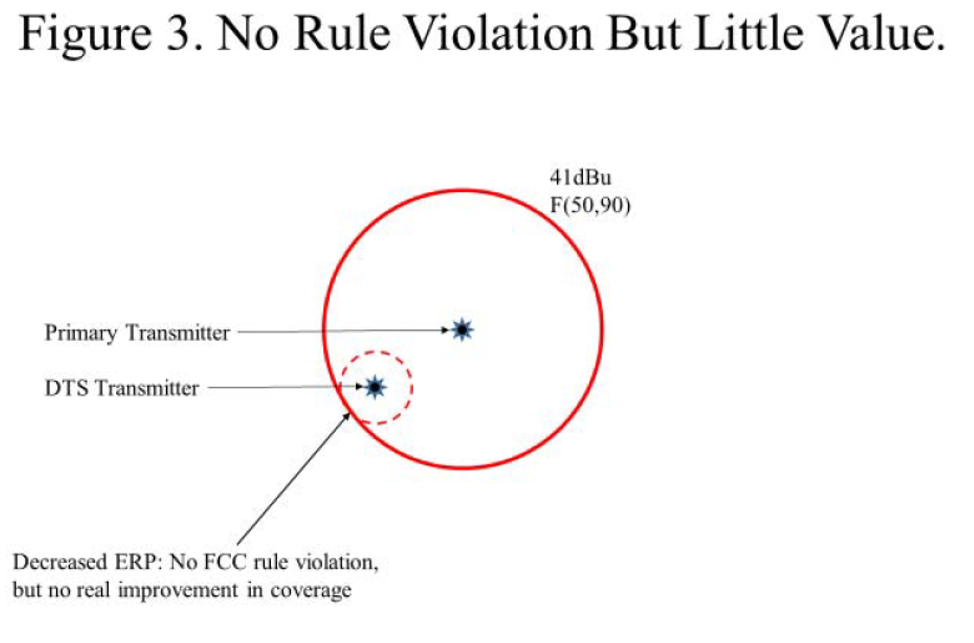 The FCC issued a Public Notice on the NAB/APTS Petition on October 11, 2019, barely a week after it had been submitted, and comments and reply comments were collected on November 12 and November 27, 2019, respectively. There was a total of 20 comments/reply comments filed by interested parties in response to the Public Notice, so there has already been a fair amount of industry dialogue on the details, of which there are certainly many.

The FCC had been weighing all the arguments made in response to the Public Notice and took the next step on March 10, which was to open a new docket, MB Docket No. 20-74, captioned “Rules Governing the Use of Distributed Transmission System Technologies,” and on April 1 released the current Notice of Proposed Rulemaking, which proposes adopting the basic principles set forth in the NAB/APTS Petition. It’s 32 pages long and asks a lot of questions (over 90 of them actually, according to a quick search in the Word document), some obviously appropriate and some perhaps a little more ponderous. A new public comment cycle has been established — comments and reply comments on the NPRM will be due 30 and 60 days after the NPRM is published in the Federal Register.

Implementation of ATSC 3.0 is essentially a big puzzle with lots of pieces. Single frequency networks are an important piece for completing that puzzle that will go a long way toward maximizing the practical use of many of the high-performance features that are possible with Next Gen TV. Modifying the FCC’s DTS rules along the lines suggested in the NPRM is the path to make that happen. While there are tradeoffs (there are always tradeoffs!), they are worthwhile and justifiable in order to reap the significant benefits provided by SFN architecture. Hopefully the current thorough regulatory effort will conclude quickly with an FCC Report and Order embracing the principles laid out in the NAB/APTS Petition. In any case, it’s a public process, so feel free to weigh in.