Imagine a world in which you could tune into your favorite morning talk show hours after it aired, rewinding and fast-forwarding at your leisure. It turns out you don’t even have to imagine, because it’s here on Entercom’s digital platform: Radio.com.

It began in 2018 when Entercom’s John Pacino, senior vice president of product, and J.D. Crowley, chief digital officer, wanted to rethink the radio experience they were offering listeners in the wake of Entercom’s merger with CBS Radio. They asked themselves, “Why aren’t there features and functionality like there is in TV, in radio?” Meaning, flexibility in when and how listeners consume content. In the quest to answer that question, Radio.com Rewind was born. “We wanted to create an experience that, if you missed your moment, you could still…go back and listen to it,” Pacino said.

Rewind launched in late 2019, about 18 months after the idea was first hatched. Users download the Radio.com app or go to the website, choose a station from there and interact with the station’s player. Of Entercom’s 235 radio stations, 55 of them are spoken word, most of which have the Rewind feature.

Let’s say you’re an Eagles fan and you missed your favorite segment from the morning show. You would go to the Eagles station via the app or website, find the segment you want to listen to — by pressing “Rewind,” all the day’s segments come up — and use the bar at the bottom to navigate from there. You can go forward or backward by 15 seconds in either direction, listen back at different speeds and skip to the next program with one click. Possibly the best part? It’s based off of actual schedule times so you can skip around throughout the whole segment as if in real time.

Say you left your car at 7:55 a.m. and you want to keep listening without missing a beat. With Rewind, you can pick up exactly where you left off, to the minute. In addition, you can use the bar at the bottom to go to the beginning of the show, or, if at any point you want to switch it up and listen live, you can simply click on the “Jump to Live” button. “We’ve taken the best of a podcast experience and a TV DVR experience and brought it into one with radio,” Pacino said. 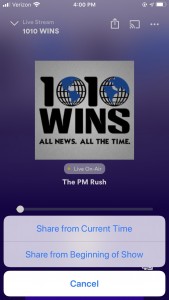 Another innovative feature Radio.com boasts is the ability to “share a moment,” called Rewind Sharing. You can hit the share button in the app and choose to “Share from Current Time” or “Share from Beginning of Show,” posting the moment on social media or sending it to a friend. When the user clicks on the link, they will be dropped straight into the moment. “The ability to now deep-link into that content adds rocket fuel to this feature that was awesome to begin with,” Pacino said. “We think this is fairly innovative in this space.”

Pacino shared an example of early success. Entercom launched the share feature around the holidays, while Mike Francesa, an Entercom radio personality, was on hiatus. When Don Imus, a longtime host on Entercom’s WFAN, passed away, Francesa, who had worked closely with him, called in to talk about his relationship with Don. It was posted on WFAN with the message, “If you want to hear Mike’s reaction to Don, click here.” As Pacino explained, “Instead of someone having to go into the podcast editor, cut the podcast and upload it, they just created a link and posted it. Within seconds, they had a link to drive people to this content.”

They’re seeing even more than expected usage out of the gate with Rewind, and half of it’s coming from new consumers. Plus they’ve gotten some really great responses from users on Twitter saying Rewind’s share feature is “the greatest thing since sliced bread.”

Building on the share functionality is the ability for stations to send push notifications, again, dropping users directly into the moment. And in addition to making these new, shiny features available on its own stations, Entercom is offering them to other radio stations as well. They are actively having conversations with the four affiliate broadcasters on their platform — Cox, Bonneville, Alpha, Salem — and they plan to add more in the near future. “Our strategy is to have as many radio stations on our platform in the U.S. that make sense,” Pacino said.

Currently, there are several next steps in progress for Entercom. Staff are working with new partners to make Rewind available on speaker devices, they’re continuing to evolve the user experience on Rewind and they’re thinking about what it would look like to apply the feature to music stations.

“We’re looking to continue building out features and functionality that make it easy, convenient and flexible for consumers to listen to our content and have a relationship with our brands,” Pacino said. “We want to position ourselves as innovators in the space. Hopefully this initial launch here shows that.”