Over the next few weeks, we’re giving you a preview of some of the best papers from this year’s Proceedings of the Broadcast Engineering and IT Conference (BEITC). This week, Lynn Claudy takes a look at a great paper on the new broadcast transmission facility at One World Trade Center.

Preorder the Proceedings now to get the full paper, along with 95 other papers from the conference. 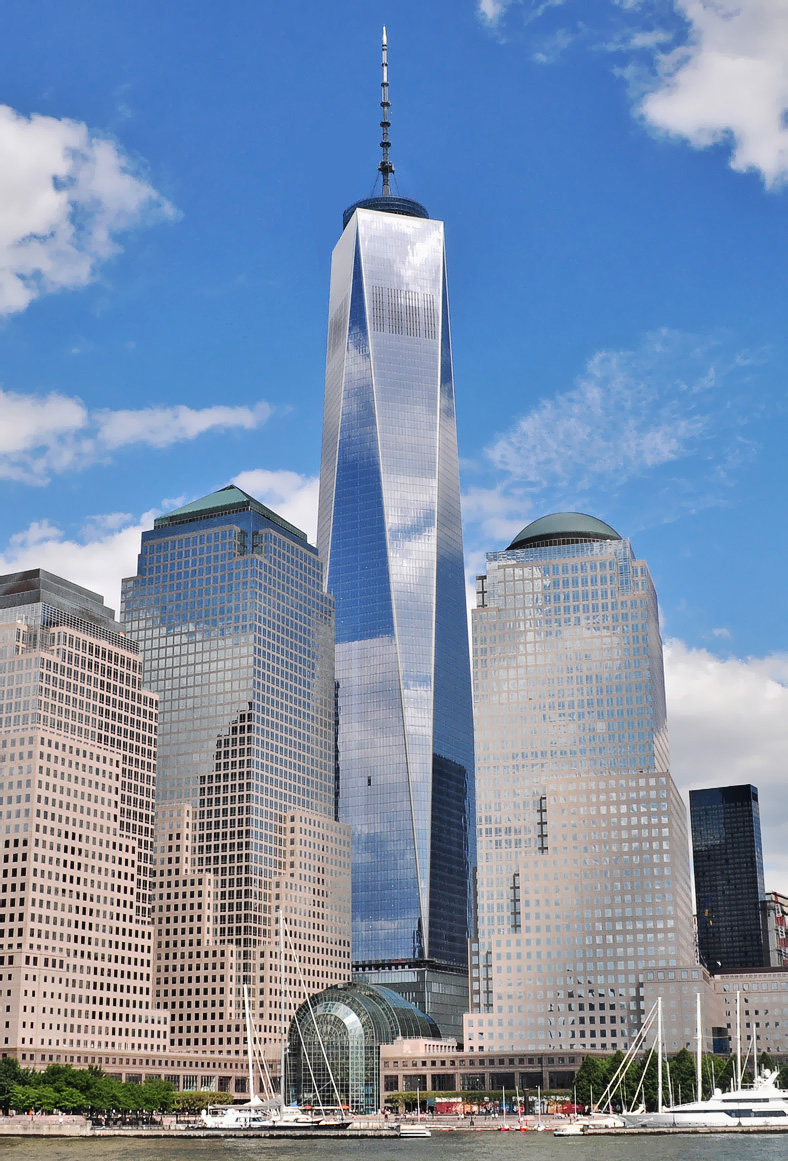 Restoring broadcast transmissions from the site of the World Trade Center in lower Manhattan is a momentous accomplishment and has been a long time coming. Before describing a little about the current paper, let’s take a look back at the magnificence of the previous transmission facility atop the original World Trade Center to provide some context and scale for the more recent project.

Fifteen years ago, at the 2002 NAB Show, a special session was held during the opening of the Broadcast Engineering Conference relating to the tragedy at the World Trade Center on September 11, 2001. Three speakers were featured: Dr. Oded Bendov was RCA’s principal engineer during the analysis and design of the original World Trade Center transmission facility in the late 1970’s; Patrick Walsh was the assistant on-site project manager for the installation of the World Trade Center antenna complex; and Dr. William Baker was President and CEO of WNET in New York and also the head of the New York/New Jersey Broadcasters Coalition, a voluntary group that was looking cooperatively for an acceptable long term solution for replacing the functionality of the World Trade Center broadcast facility.

Tragically, six broadcast engineers were killed on September 11 2001 at the World Trade Center: Donald DiFranco, WABC-TV; Gerard (Rod) Coppola, WNET-TV; Steven Jacobson, WPIX-TV; Robert Pattison, WCBS-TV; Isaias Rivera, WCBS-TV, and William Steckman, WNBC-TV. At the beginning of this special 2002 NAB Show session, the engineers that were lost when the towers came down were honored by the Society of Broadcast Engineers. First, SBE President John Poray described that organization’s substantial fundraising efforts to benefit the families of the six engineers. The three principal speakers then made presentations, looking back at the design and installation of the original broadcast antenna system on top of the original World Trade Center, followed by a report on the various options, both those that were practical and some a bit more far-fetched, for how broadcasting might eventually find a permanent home again in New York City. Below are several slides from the presentation at the 2002 NAB Show, showing some of the details imparted at the session.

Now it’s 2017, and One World Trade Center (formerly called Freedom Tower) has been completed, including its brand new broadcast transmission facility. Having established from the 1970’s project that master antennas on skyscrapers in New York City are huge, heavy and challenging to install, the upcoming presentation at the 2017 BEITC will show that doing so in the modern context is no less challenging. The group presentation from team members from Durst, RFS, MYAT and others will explore in detail and with numerous photos how the new antennas and other RF components are being assembled, tested and deployed.  An excerpt from the paper appears below: 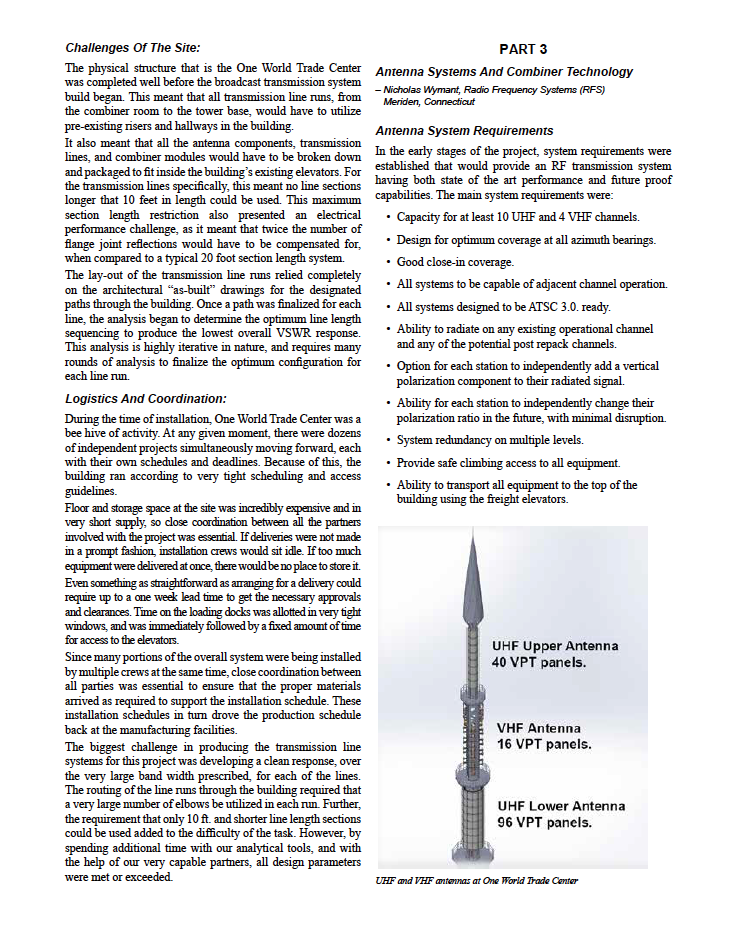 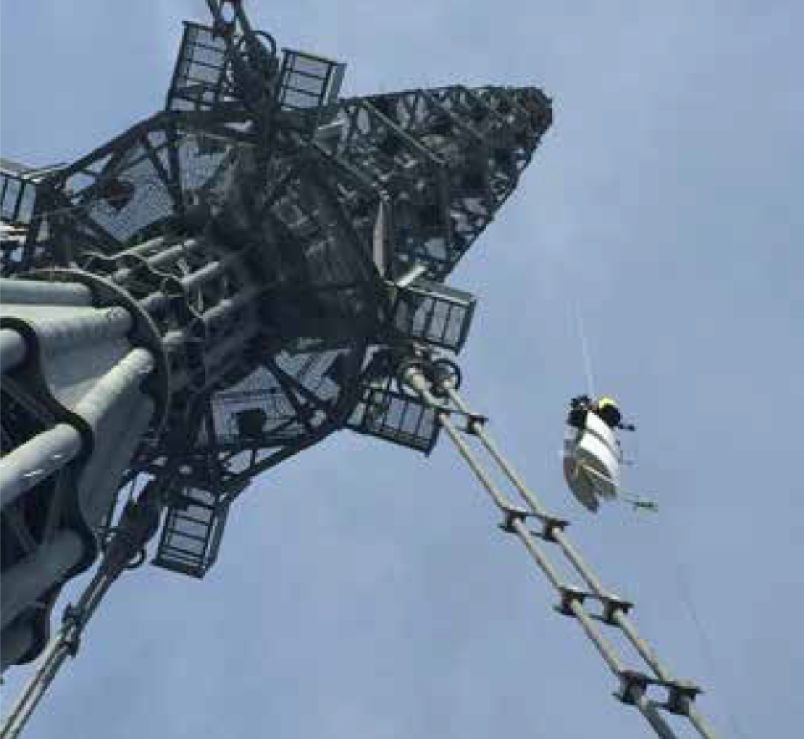 The one-hour presentation at the BEITC on April 26 will share the results of an impressive and successful broadcast transmission system mega-project, which will be highly informative for all who are able to attend. But it is also a commemoration of regaining something precious from all that was lost in New York in 2001. That’s well worth paying tribute to, as a solemn and calamity-borne promise from long ago that’s now being kept.

You can preorder this paper as part of the BEITC Proceedings now.