Our Studio City loft still had boxes strewn about from the recent cross-country move from our 40th floor perch in Long Island City, NY. This wasn’t my first stint in the city of angels.  I lived here for several years producing music, the last of which was not more than a year ago. This time was different though, as I had my best friend Chloe with me. We came back to LA to launch our record label and things were moving along swiftly. From video shoots in the LA river to late night studio sessions making mind-blowing music, it was just another day in the life of any up and coming record label. 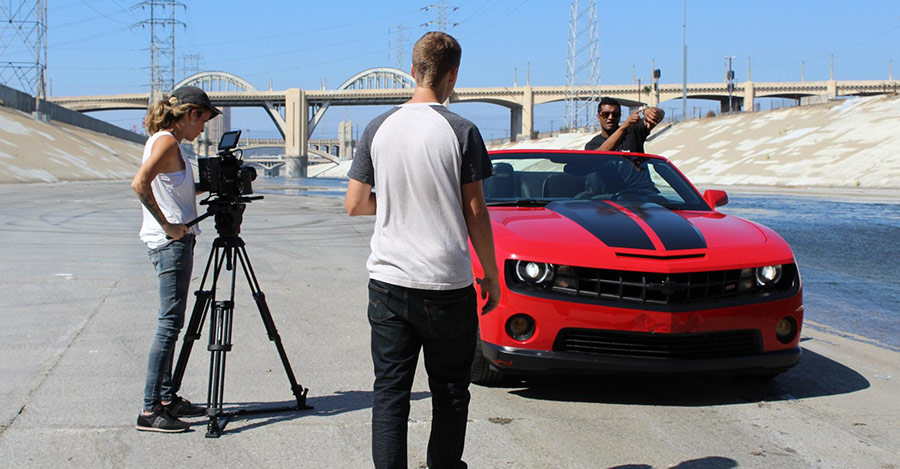 As luck would have it, our next door neighbor happened to be a super talented VFX artist. He stopped by one evening, and over a bottle of Jack Daniels we started discussing the subject of torrents and piracy. He said that 3D models get stolen left and right; and that he would flip a normal to hide his artist signature in his creations so he could know if someone stole his work. As it turns out, aside from producing music, my other area of expertise happens to be computer forensics and eDiscovery, which led me to suggest encrypting vertices of a 3D object to prevent theft. AHA!! ….In that split second, we all realized what a ground-breaking idea this could be. Papers started flying, chalk and whiteboards were pulled out, and the next morning Chloe was on the phone with a patent attorney. 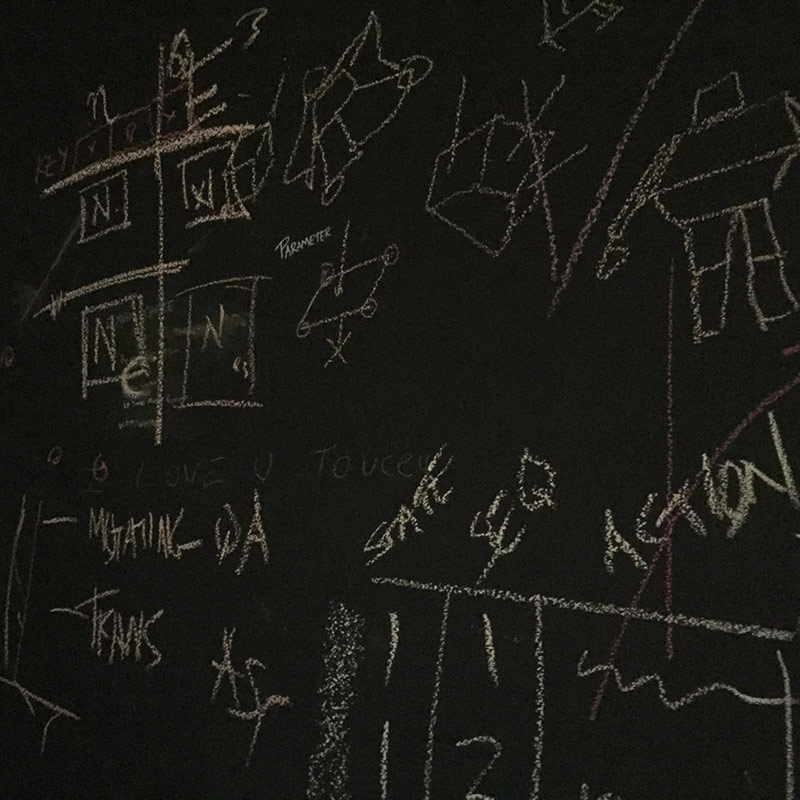 Chloe was our catalyst. She Put This In Motion. Without Chloe, it would have been just another good idea a group of artists talk about one night and the next it becomes a distant memory. She made sure to set the idea into motion; filing the paperwork, making connections and keeping us in gear. In the weeks that followed I thought to myself, who do I know that will understand this concept and give us a fighting chance at creating it? I didn’t have to think long. Over the past 16 years of my life, there has been one programmer who can always do the impossible. He is a friend of mine whom I have worked with at several companies over the years, including another successful startup of mine, and he always crushes it. His name is Mike Shull. I gave him a call and as expected he said, “Sure, let me see what I can come up with.”

Long story short, Chloe, Dosa (the VFX genius) and I decided to move to Atlanta where Dosa had a huge factory for us to run the business from. We flew Mike down for a week, and after three alcohol fueled late nights we had a working prototype for our software called D3CRYPT3D. Chloe posted our creation to over 100 3D forums, where the real artists often dwell. This garnered the attention of SXSW Interactive Innovation Awards and we were invited to compete in 2017. We crushed the exhibition and came home with a win! At this point, we all still had full-time jobs and D3CRYPT3D was an after-hours effort. 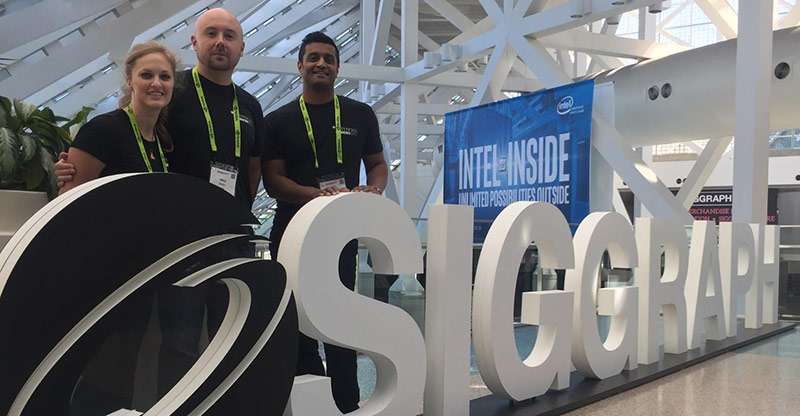 In August 2017 we exhibited at SIGGRAPH, in LA of all places, and received amazing responses. We came away with over 120 excited leads from companies both small, and far above the billion dollar market cap, all with the same enthusiasm for a solution like ours. The show was a huge success for us and gave us validation that the market was hungry for what we wanted to provide.

In September 2017, we attended Patriot Boot Camp (PBC) in Denver Colorado. Chloe is a Marine veteran and PBC is a great place for entrepreneurs to learn and network to foster growth for their startup businesses. While at PBC we met Dave Odom, one of the managing directors of a cybersecurity accelerator, Darkfield. He understood what we were trying to achieve and we ended up having a quick call a few weeks later with him and his other managing partner Alex Kreilen. The call was amazing. Within minutes, Alex and Dave had such a crystal clear understanding of what we were trying to build, that Chloe and I decided we should join their program. We had no intention of joining an accelerator prior to this point, even though we were being courted by several. In October 2017, Darkfield invited us to join their January 2018 cohort! This was groundbreaking for our company, as their small seed investment finally enabled all of us to take the leap, quit our six figure day jobs, and run our company full time. Just to be clear, it was enough of an investment to fund us living in Denver for 3 months and the ability to eat more than Ramen. More importantly, it was the spark we needed to be fearless, give up everything else, and go at our business full steam. 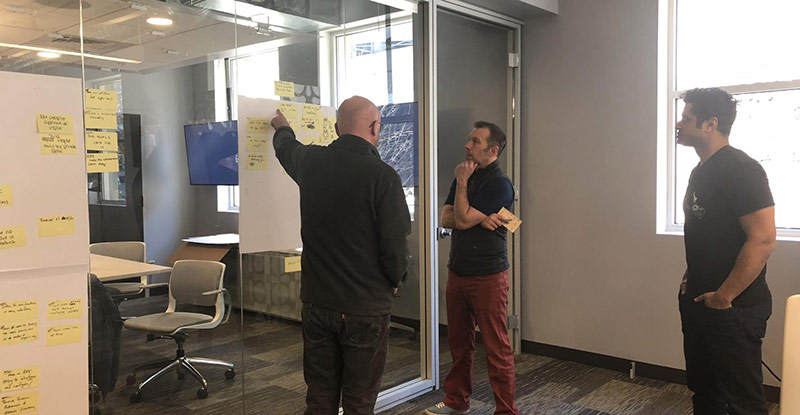 Prior to joining Darkfield, we underwent a name change to PolyPort after an extensive brainstorm, with the goal to make our company name more friendly and easier to spell. The Darkfield experience was priceless. The amount of hands on attention we received and still receive to this day is unimaginable. It is, hands down, one of the best decisions we made as a company. This March, we headed back to Austin for the second year and came away with our second consecutive SXSW award for the Accelerator Pitch Event! 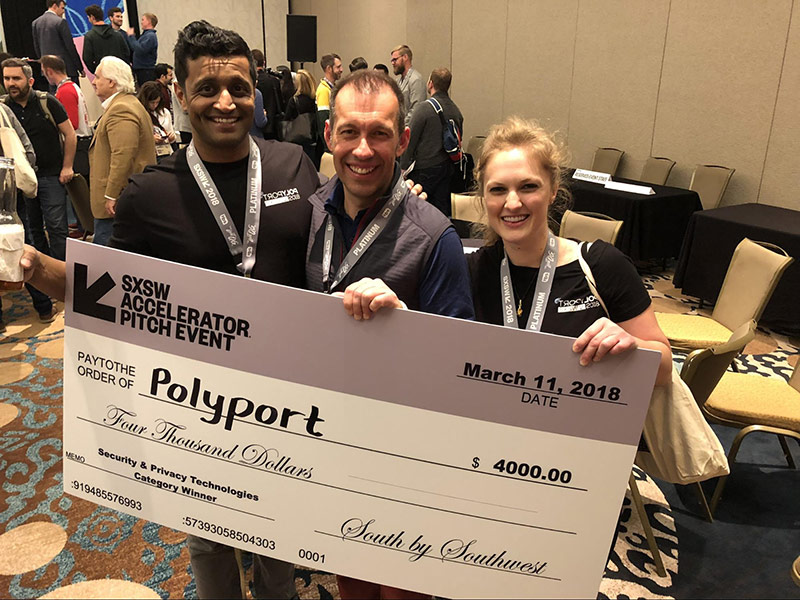 SXSW 2018, with Dave Odom, ecstatic after hearing we won the Accelerator Pitch Event

Fast forward six months, we moved our company to Denver, are building out our team, are in delivery phase for two major customers, are steps away from closing our round of seed financing, and are pushing towards a big beta launch in January. As my cofounder Chloe said, “Startup life is far from glamorous. The highs are exhilarating and daily bumps and bruises are a way of life, but every now and then you’ll run into challenges that feel akin to a devastating blow to the gut. It’s critical for company leaders to stay focused on what really matters during these times, in order for the company to endure. This past year has been nothing short of grit and perseverance and I wouldn’t dream of another team to do this with.”

We are ecstatic to be considered for investment from NAB this month at the PILOT Pitch Prize. Having their backing and access to their network of media executives and professionals will push our company to the next level. We look forward to seeing everyone at NAB NYC next week! 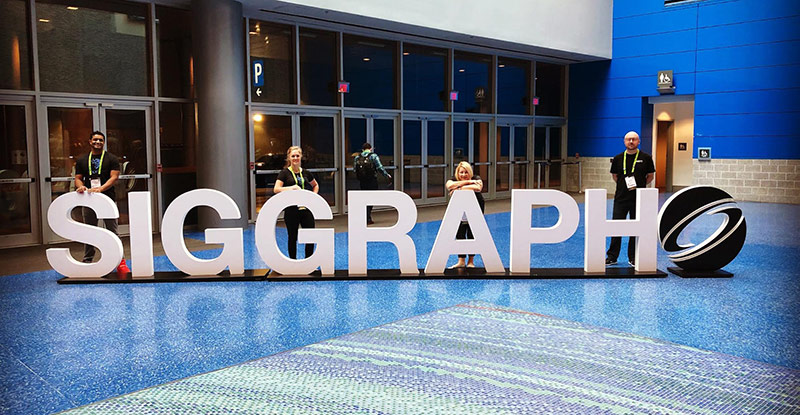 SIGGRAPH 2018, Vancouver; our team is growing!

At PolyPort we are striving to change the way people protect their 3D intellectual property to enable the creative process. With PolyPort companies are able to engage the most talented designers and artists to work on their crown jewels, no matter where they may be around the globe. We are confident that the future of innovation will depend on greater collaboration in a secure environment. The time has come for content to be created everywhere, be available anytime and be protected from theft. At PolyPort, we’re protecting your ideas one polygon at a time.