Proceeding with the 2020 NAB BEITC Proceedings

The 2020 Proceedings of the Broadcast Engineering and Information Technology Conference (BEITC) will have a treasure trove of archived technical content from the NAB Show, which is true every year. This one, however, won’t be like any other Proceedings of the past, which will be explained below. But to fully appreciate the new innovative approach being implemented for 2020, let’s start by taking a look at the long arc of the publication’s history.

Since the time of the first NAB Engineering Conference in 1947 (this year will mark the 74th such event), NAB has produced a published technical record of selected papers presented at the conference (now bearing the longer BEITC name). For many years, they looked like a binder of typed-up manuscripts (which is, in fact, exactly what they were), until well into the 1980s: 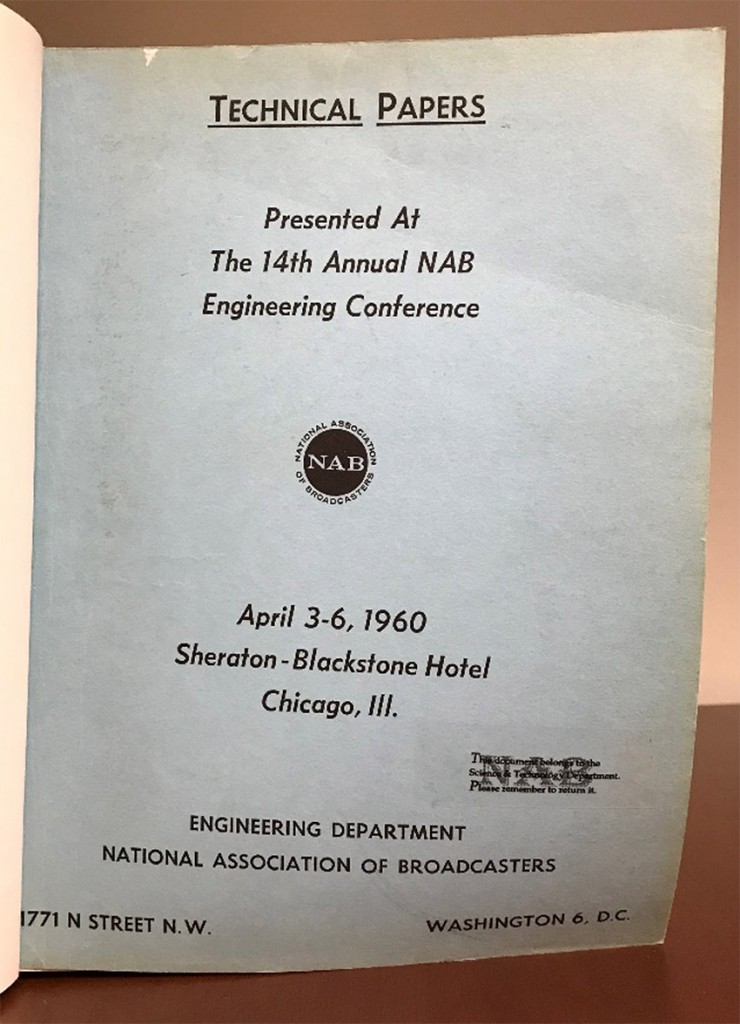 The NAB Engineering Conference Proceedings from sixty years ago

A glossy cover and other publication refinements were implemented in the mid-1980s, and the Proceedings started to take on a more polished and professional look: 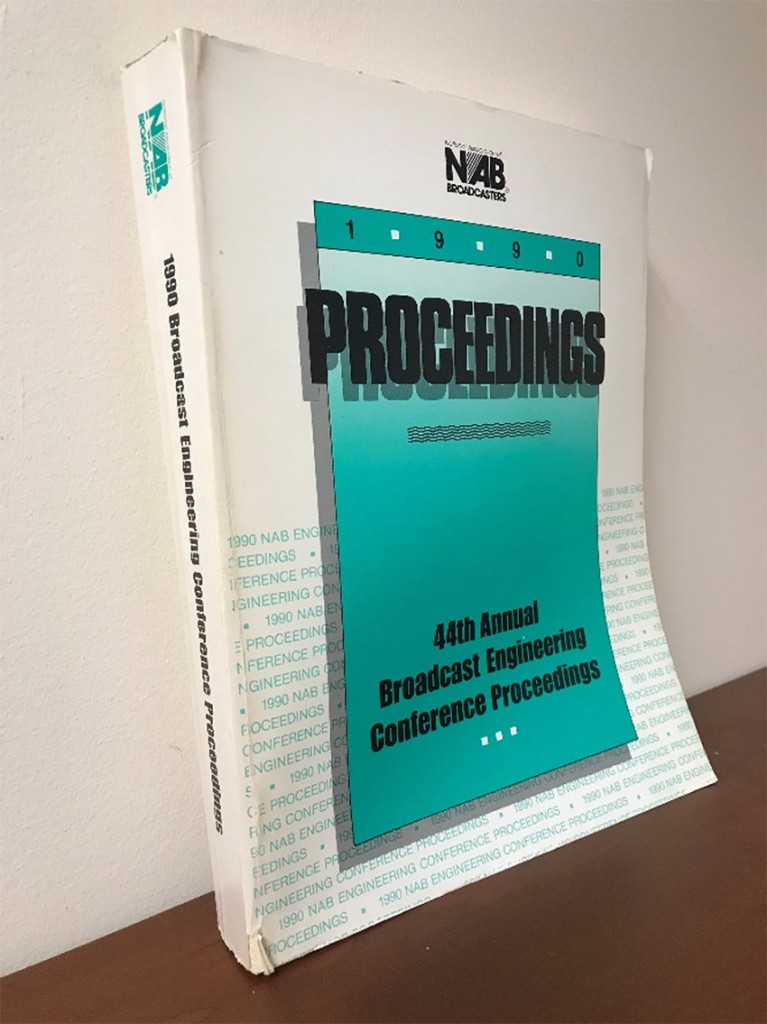 The NAB Broadcast Engineering Conference Proceedings from thirty years ago

As time and technology marched on, dual publishing as a book and accompanying CD-ROM started in 2001: 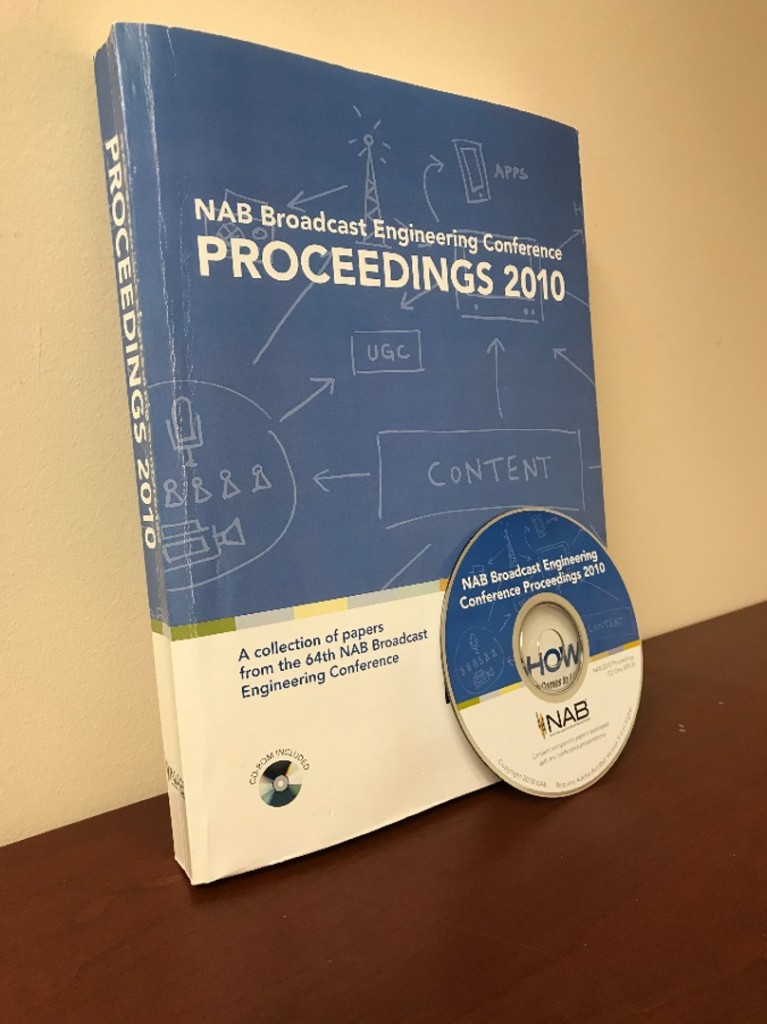 The NAB Broadcast Engineering Conference Proceedings from ten years ago

And then in the mid-2010s, paper versions and CD-ROMs both became no longer fashionable, and the Proceedings transitioned to being available exclusively on a USB drive: 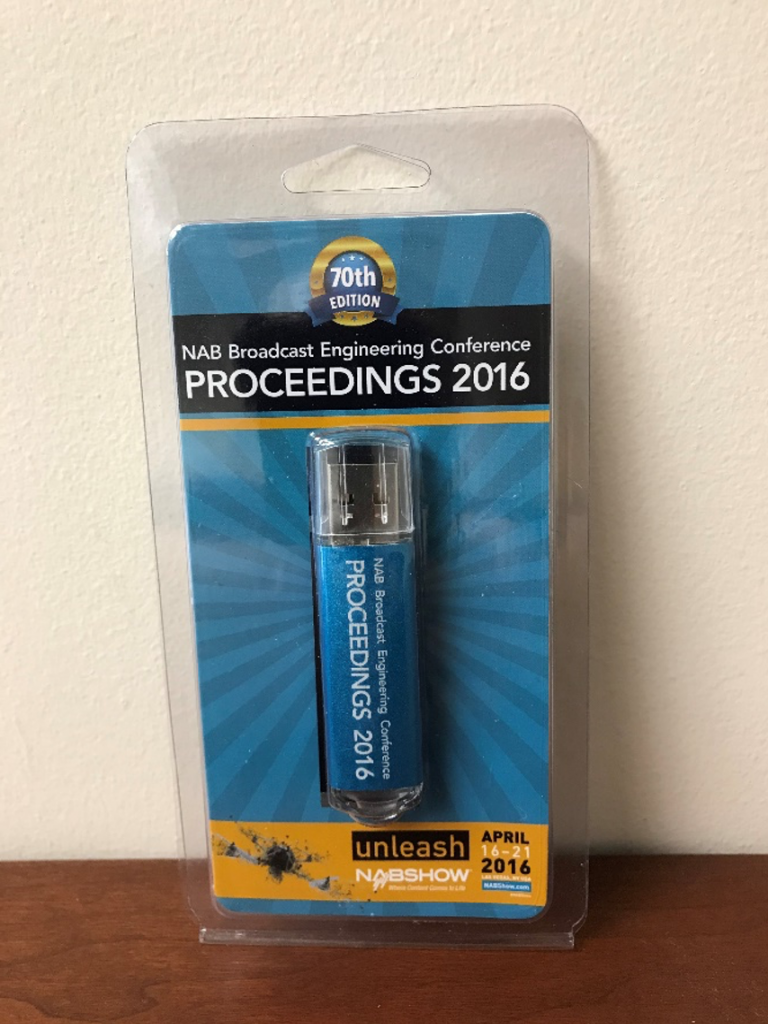 The NAB Broadcast Engineering Conference Proceedings from four years ago

Starting this year, the Proceedings lets go entirely of tangible solid form and moves to the cloud. Generally what this means is that the publication will be more accessible to more people than ever before, with none of the limitations and inconveniences of paper and local storage devices. 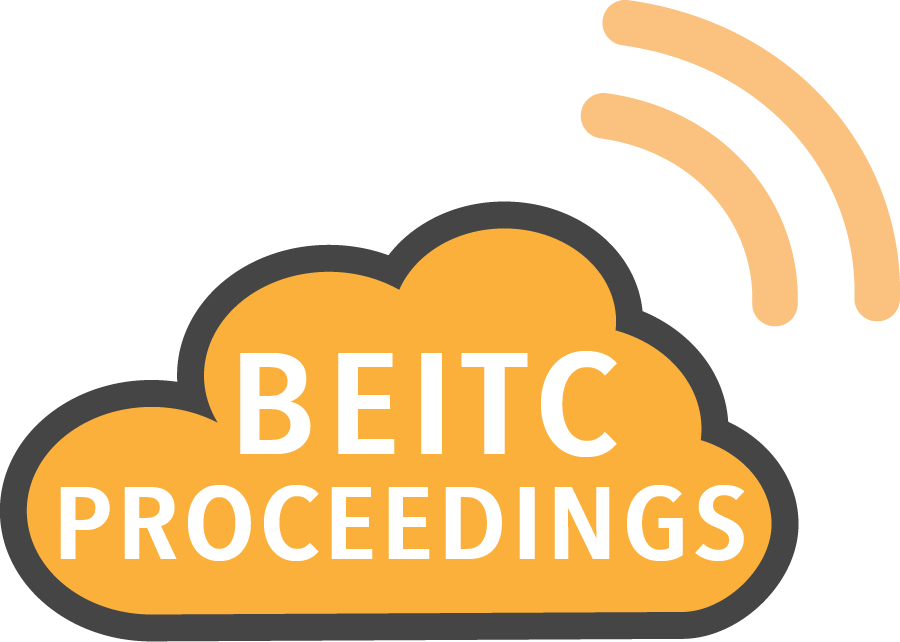 More details will be forthcoming about how to purchase and access the 2020 Proceedings (in whole or in part).

As to what will be in the publication, of course it will be a treasure trove of archived technical content from the NAB Show, which is true every year (and if that sounds familiar, see the first sentence of this blog). But more specifically, there will be almost 70 papers included (versus 59 in last year’s Proceedings). While a blog is not the best venue to provide exhaustive details of every technical paper being published, some examples of the type of technical papers included might be helpful, and possibly even inspirational, leading up to the Show. Since I’m personally a fan of the concept of single frequency networks (SFNs) for ATSC 3.0 (and I think you should be too), below are the abstracts from four papers in the Proceedings on that subject. And following that, to stimulate curiosity in the “what’s next” category, is the abstract from the paper from the leadership at the Advanced Television Systems Committee discussing the future of broadcasting beyond ATSC 3.0.

Abstract – This paper describes challenges of building ATSC 3.0 networks and how these challenges have been addressed in similar types of Digital Terrestrial Television networks. One of the challenges is the change from competition to coopetition for the distribution part. The paper also describes how challenges specific to building a robust, economical ATSC 3.0 distribution network to connect studios with multiple transmitters potentially in different regions can be addressed. As ATSC 3.0 allows for using Single Frequency Network operation, the aspect of reliable and secure distribution of timing is also addressed.

This paper will present the various obstacles encountered in engineering an SFN in the San Francisco-Oakland-San Jose DMA, and the solutions we’ve created to overcome those obstacles to create a robust, FCC-compliant SFN design. We will describe the process we’ve undertaken to design ATSC-3.0 SFNs on both UHF and VHF and how we arrived at the proposed SFN designs. Finally, we will discuss the futility of SFN design without proper propagation software deployment.

Abstract – Last year we proposed an approach for providing ATSC 3.0 Studio-to-Transmitter Link (STL) data delivery for SFN and Gap-Filler operation using in-band backhaul (a.k.a. in-band distribution link) over the air in the 6 MHz broadcast channel. In this paper, we will present detailed analysis of the backhaul issues and implementation considerations. We will also exhibit the field measurement results that support the viability of the in-band backhaul system implementation using full-duplex transmission. We will further present a full duplex Inter-Tower Communication System – a scalable and re-configurable wireless network for SFN broadcasting, in-band inter-tower communications, and IoT/datacasting applications, while backward compatible with ATSC 3.0. The method uses Layered Division Multiplexing (LDM) transmission to carry STL data alongside broadcast data intended for public reception. The in-band backhaul is able to offer better performance and more robust operation than the on-channel repeater (OCR) technologies. It offers the possibility of delivering backhaul data for future applications over the DTV infrastructure, such as IoT and connected vehicles. It is one enabling technology to achieve convergence of broadcast services with broadband and other wireless services on the DTV spectrum.

Abstract – This paper examines certain challenges to implementation of Distributed Transmission Systems (DTSs), also known as Single-Frequency Networks (SFNs), presented by the regulations governing their design and licensing in the United States, exploring the issues they cause. It then considers alternative approaches to the specific portions of the regulations that create the difficulties. It explains the choice of one approach that has been proposed for adoption in a regulatory process to replace a portion of the current rule, and it discusses the impact that the proposed change will have on different types of television broadcast licensees.

ATSC: Beyond Standards and a Look at the Future

Abstract – As a standards development organization, the Advanced Television Systems Committee (ATSC) has been focused for the last several years on completing the ATSC 3.0 suite of standards. While amendments, corrigenda and other document extensions and maintenance are evergreen, ongoing activities in the standards realm, the ATSC mission also encompasses “looking around the corner” for the Next Big Thing in the evolution of broadcast media. To this end, ATSC has formed Planning Teams and other groups that are examining advanced broadcast technologies, automotive applications, global recognition of ATSC 3.0, developing a near-term service roadmap for ATSC 3.0 services and features, convergence with international data transmission systems such as the Internet and 4G/5G, and other topics. This paper provides sections on a historical perspective of the development of ATSC 3.0, details on the ATSC 3.0 standard’s toolset to evolve in the future, the organizational capabilities of ATSC supporting investigation of new technologies, and a summary of the recent report from the ATSC Planning Team on Future Broadcast Ecosystem Technologies. Together, these sections comprise the steps being taken by ATSC toward developing a robust vision of the future of broadcasting.

By Lynn Claudy|February 20, 2020|Blog|Comments Off on Proceeding with the 2020 NAB BEITC Proceedings