Traditionally, broadcasting has centered around the idea of a single transmitter serving a wide coverage area. In the 100 years since the first commercial radio broadcast, this system has worked exceedingly well to provide news, entertainment and educational content to viewers and listeners wherever they may be.

With a typical television transmitter, viewers up to about 65 miles away can receive high-quality local video signals from a central point. But these big transmitters come with some downsides as well. First, radio signals don’t stop at the edge of the usable service area, they continue to propagate at decreasing signal levels, preventing other stations from using the same frequencies close to the signal edge, creating an “interference area” where that channel can’t be used by any station. Also, while digital television enables viewers near the edge of the station’s reach to see the same quality of pictures as viewers in the city center, those viewers are expected to have pretty substantial antennas mounted on their roofs to get that signal.

The idea of on-channel repeaters to improve television reception in weak signal areas isn’t new. In 2008, the Federal Communications Commission (FCC) first adopted the distributed transmission system (DTS) rules to allow digital television stations to fill in gaps in coverage. These distributed transmission systems are also sometimes called Single Frequency Networks (SFNs). While several stations around the country have taken advantage of this technology to improve service, particularly in areas where terrain prevents signals from reaching parts of the service area, this has not been a very popular option for stations using the first-generation digital television standard (DTS). This is in part due to the limited benefits of deploying DTS in ATSC 1.0, and in part due to limitations in the FCC rules that provide minimal benefit. As shown in the figure below, each DTS transmitter would only provide a very small number of homes with a meaningfully improved signal. And in ATSC 1.0, the only difference this improved signal makes is the ability to receive over-the-air signals without a roof-mounted antenna. 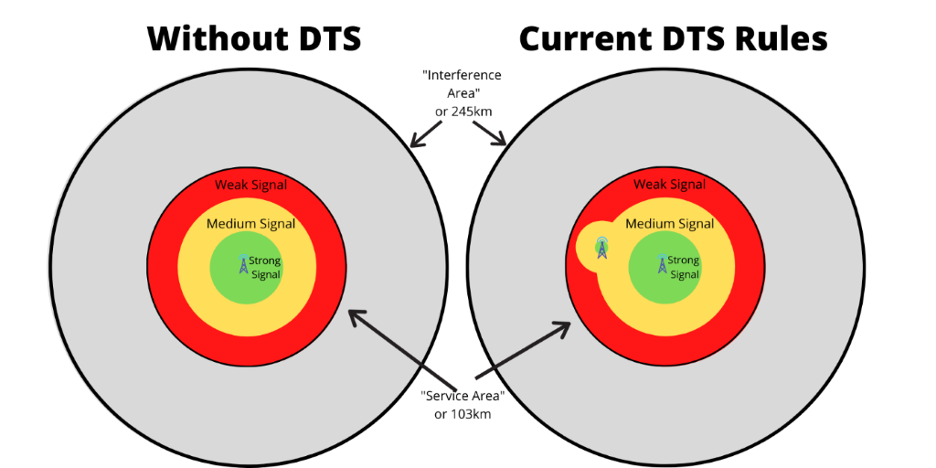 However, two things are poised to change and make SFNs a lot more attractive for television broadcasting.

First, Next Generation TV provides for a lot more possibilities for stations that can offer stronger signals. If stations can count on higher signal strength throughout their coverage area, they can take advantage of the flexible coding options in the Next Gen TV standard to provide higher bitrates and deliver services that need those higher bitrates like more and/or higher resolution video streams, along with data services that enhance the television service. Or stations could leverage those higher signal strengths to offer more robust mobile and handheld reception so that viewers can watch TV on their mobile phones or in the back seats of their cars without relying on mobile broadband networks. The best thing is that all of these services can be provided at the same time. If broadcasters can ensure a stronger, more uniform signal throughout their broadcast area, they can provide much more advanced services. SFNs are a big part of making that possible.

Second, in October 2019, the National Association of Broadcasters and Americas Public Television Stations filed a petition with the FCC to allow stations to increase signal strength at the edge of stations’ coverage area, while preserving the current limits on the interference area. By allowing some of the signal to spill over outside of the service area, it is possible to provide a stronger signal within the service area, without increasing the interference area. This allows a station, with a relatively small number of additional transmitters, to provide a strong enough signal to allow indoor and/or mobile reception even to the outlying parts of its coverage area, helping to bridge the rural-urban divide. Based on the NAB/APTS petition, the FCC adopted a Notice of Proposed Rule Making (NPRM) on March 31 2020 and collected public comments on the requested DTS rule changes. 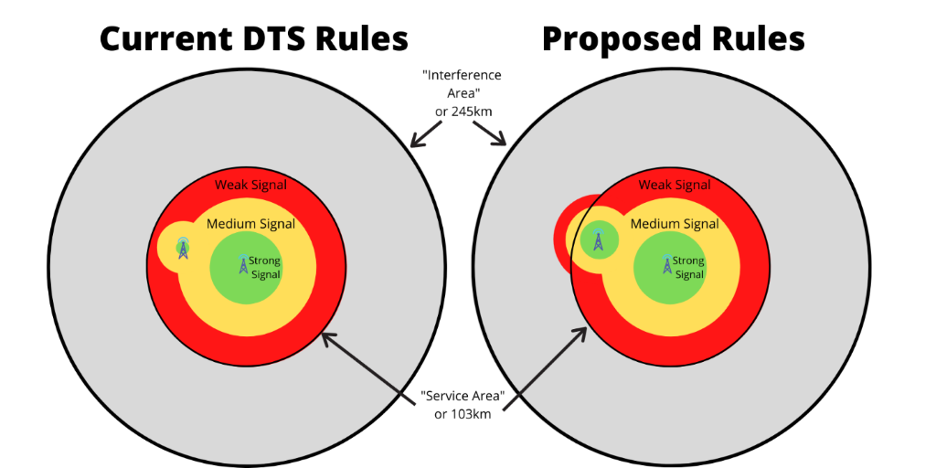 Proponents have filed more detailed studies in the FCC’s record showing how improved coverage can be achieved with these proposed rule changes. The FCC is poised to act on this NPRM soon, possibly before the end of the year. As broadcasters continue their Next Gen TV rollout, this could be a huge benefit for over-the-air viewers everywhere in the years to come.