Some Thoughts on the Prospects of 8K Ultra HDTV

I attended the 8K Display Summit in New York in mid-June, sponsored by Insight Media, which delved deeply into the status of 8K Ultra-HDTV technology and market possibilities. While epiphany is probably too strong a word, the event opened my eyes more to the recent positive trends concerning 8K. Some of the usual arguments against 8K are beginning to crumble, and somewhere on the 3-hour train ride back to DC that evening I  found myself beginning to agree with the unstated but somewhat assumed theme that permeated the New York event that 8K is an inevitable eventuality, and gaining acceptance perhaps sooner than previously thought. 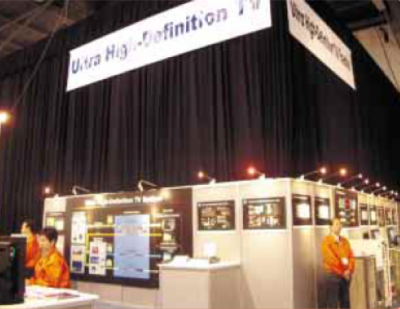 Figure 1 The NHK Ultra HDTV Exhibit at the 2006 NAB Show showcasing 8K UHDTV for the first time outside Japan.

NHK, the public broadcaster in Japan, actually began researching 8K Ultra-HDTV as far back as 1995. I remember well the 2006 NAB Show where NHK’s Ultra-HDTV system was presented to the public for the first time outside of Japan. The exhibit (see Figure 1) consisted of a theater with an 8K projector shown on a 400-inch screen and 22.2 channel sound system. Content shown included a custom program highlighting the busy sights and sounds of New York and excerpts of Sumo wrestling, along with a live prototype 8K camera on the roof of the Las Vegas Convention Center, the signal compressed down to 640 Mb/s for transmission by fiber to the theater. It was a big hit that year (even though my memory of it is marred by a persistently squeaky and ultimately unfixable ventilation fan in the ceiling of the LVCC compromising the perfection of the immersive sound field in the theater.)

But for all its marvel as a technology, it’s been hard to shake the notion over the years that 8K is:

These three challenges are now being addressed and at least partially solved, one by one. 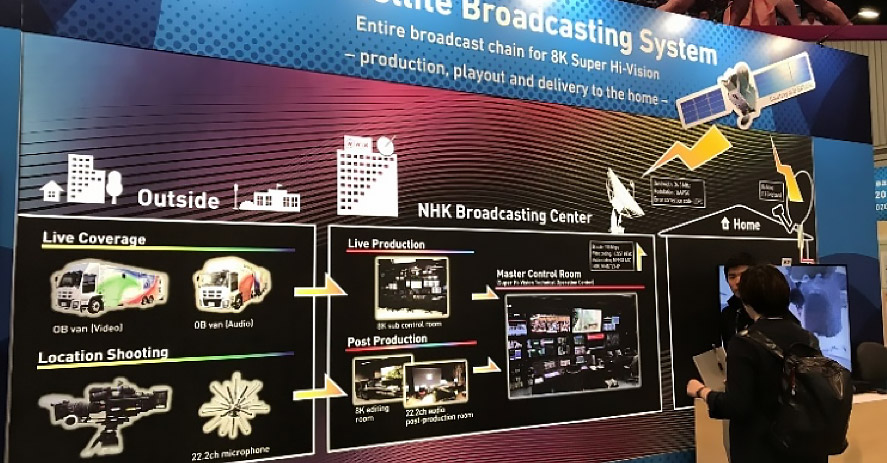 Not if you ask NHK, which officially launched its regular 12-hour a day satellite broadcast service called Super Hi-Vision on December 1 2018, beginning with a showing of the movie “2001: A Space Odyssey” transferred from its original 70mm film format to 8K.  Going forward and leading up to the spectacle of the 2020 Tokyo Olympics, NHK’s volume and diversity of programming are increasing, production equipment is maturing, and awareness of the format is being heightened. To illustrate the point on program diversity, Figure 3 shows a portion of the 10 am-to-10 pm online program schedule for NHK’s BS8K satellite service for the week of June 24 (it’s only available in Japanese but you get the idea). 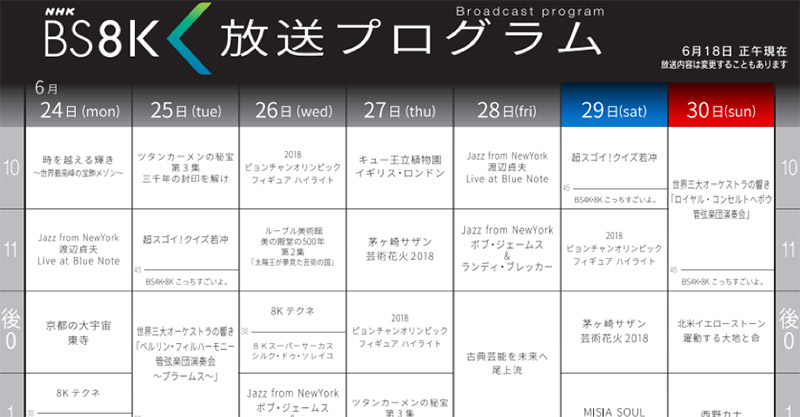 How about 8K via terrestrial broadcasting?

Not an easy task, but NHK is working on that as well, with current research on follow-on technologies to ISDB-T showing compression, error correction and modulation advancements that may make 8K terrestrial broadcasting practical in the future. The 2019 NHK exhibit at the NAB Show also highlighted the latest research and development in this area. (Meanwhile, the Chinese National Engineering Research Center [NERC-DTV] is also working on a terrestrial 8K system that it hopes to have ready for the 2022 Winter Olympics, which will be held in Beijing.) 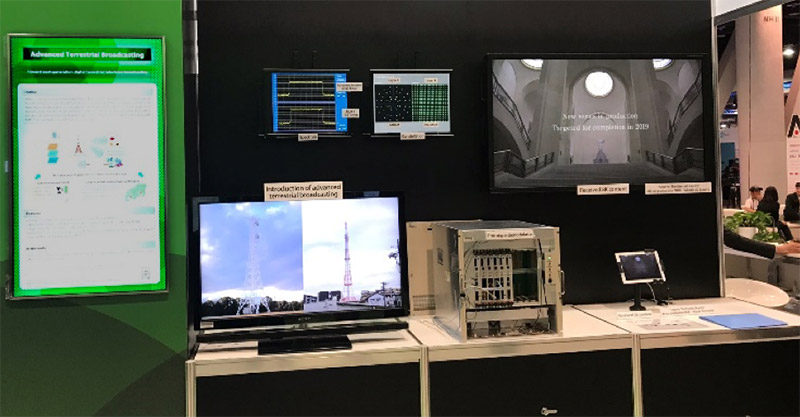 In the world of ATSC 3.0, 8K is not on the near-term roadmap. At the 2019 NAB Show, though, the Korean research organization ETRI showed how the channel bonding feature in ATSC 3.0 could facilitate 8K transmission using two 6 MHz RF channels.  That’s one too many channels for practicality now, but consider that the newest compression standard effort by the international standards group MPEG called Versatile Video Coding (VVC) aspires to achieve double the efficiency of HEVC coding and is scheduled for completion by the end of 2020. An efficient compression scheme such as VVC in concert with SFN transmission configurations that increase the average signal-to-noise ratio in the broadcast service area could potentially facilitate reliable delivery of the data rates that are in the ballpark needed for 8K service. Never say never? 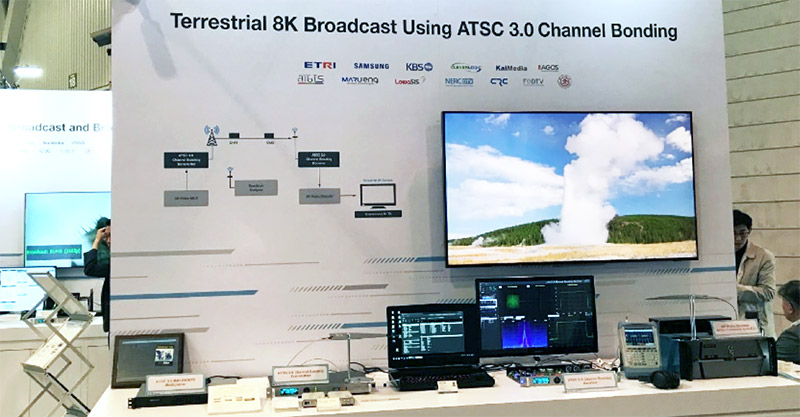 And what about 5G?

8K over 5G is already a common 5G “talking point” for companies like Foxconn, Huawei and Samsung and at least one experimental trial has been conducted: France Television covered the recent Roland Garros Tennis Championship in Paris in June using 8K production equipment and delivered by 5G distribution technology, as detailed in this blog by France TV Labs. While the grandiose hype about 5G can become almost tedious at times, a video service that consumes about 100 Mbps is hardly at the limits of what is being claimed for the capabilities of 5G service—this one is well within the realm of possibilities.

Out of reach for consumers?

Perhaps for the moment, except for folks with significant amounts of disposable income, but as manufacturing volumes ramp up, prices will come down—prices will always come down with volume.  Samsung already has a full line of 8K TVs, with MSRPs ranging from $3,500 for a 55” model to $9,000 for an 82” model and $70,000 for a 98” model.  Sony has models available as well. Figure 6 is an example of one study of projected growth in 8K TV sales, showing that for the near-term, 8K TVs will remain a niche product category. But the slope of that curve looks really steep and if it continues at that rate beyond 2022… 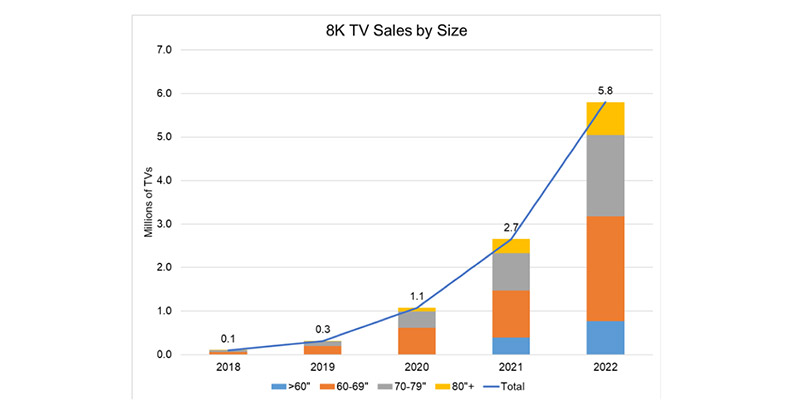 Isn’t 8K a waste of time except at very close viewing distances?

This has always been the biggest impediment for me. I’ve known/internalized (forever it seems) that the resolution inherent in 8K displays can’t be appreciated at typical comfortable viewing distances with reasonably sized screens. The human eye can’t distinguish details that subtend an angle to the eye of less than one arc-minute of one degree. That’s the typical resolution rule, the one that leads to HDTV optimum viewing distance being at 3 times screen height, 1 ½ times screen height for 4K and .75 times screen height for 8K. For a 100” 8K display, the rule implies you can be no farther than about 38” from the screen or else you’ll be missing out on the high resolution detail. That’s the easy-to-calculate objective rule that engenders skepticism about the practicality of 8K.

And yet, from personal experience I (and others as well) have to admit that these high resolution displays can create a hugely favorable impression at much farther distances than the above rule would indicate. NHK’s psycho-physical research in particular has shown that maximizing the “sense of realness” and “sense of being there” don’t necessarily correspond with the visual acuity rule. NHK research showed that the optimum point for 8K seems to be at about 1.4 times screen height, where “sense of realness” and “sense of being there” are maximized, as shown in Figure 7. 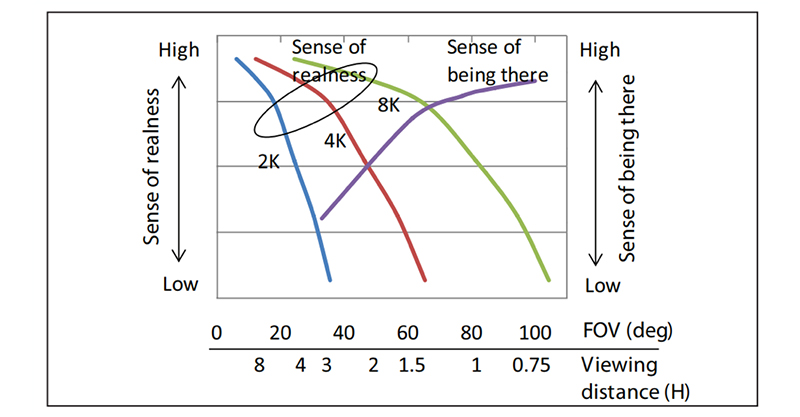 At the 8K Display Summit in New York, the pleasing effect of 8K images were discussed and explored. Particularly interesting was the research presented by Professor YungKyung Park from Ewha Women’s University in Korea. In an experiment with 120 participants, 4K versus 8K images were evaluated using 65” displays at a viewing distance of 9 feet. Despite being an equivalent 3+ screen heights away, the 8K display performance was rated 35% higher overall than 4K—with perceived image quality increasing by 30% and depth perception increasing 60% from 4K to 8K. The explanations for the improvements with 8K involve esoteric psycho-physical effects such as the subjective impact of improved luminance gradients, Mach band formation and the hyper-realism phenomenon as being more achievable with 8K renderings. It was a fascinating presentation and one of Professor Park’s statements was particularly memorable: “You can’t measure it, but you can see it.” A summary of some of the study can be found here on the Samsung Display website.

What does all this mean?

The main point is to take notice that 8K is likely to become a major part of the media landscape, although not immediately. It will be a niche market initially due to all the technical and economic challenges but in the longer term we’re likely to have 8K sets in our homes, high value content is likely to be produced in 8K and one way or another that content will be made available to the mainstream consumer audience. There will be opportunities for broadcasters in this market segment as ATSC 3.0 and its eventual successors take hold, so keeping up to date on the progress of 8K technology, products and market penetration should be time well spent. And for the Parthian shot to sum it all up, I’ll end with a quote from American biologist Leroy Hood, who could have been (but clearly wasn’t) talking about 8K when he said: “If you just focus on the smallest details, you never get the big picture right.”

By Lynn Claudy|July 9, 2019|Blog|Comments Off on Some Thoughts on the Prospects of 8K Ultra HDTV