Back in March, PILOT participated in its first automotive app development hackathon hosted by General Motors in Tampa. Subsequently, September was a busy month for Team PILOT as we attended and developed apps at two more hackathons: A SmartDeviceLink (SDL) hackathon in conjunction with the first-ever SDL consortium-hosted conference at Mobile World Congress Americas in San Francisco; and a second GM hackathon in Boston.

These hackathons are an opportunity for automakers to generate interest in their connected car platforms, obtain input on their Software Development Kits (SDKs) and identify bugs. (Team PILOT received a bounty at the Boston event for uncovering a major bug!) For app developers, hackathons provide access to new platforms and are an outlet for programmers’ creativity.

PILOT participates in these events to get engage with automakers and app developers interested in the opportunities afforded by connected cars for great radio-related apps. All of the apps developed at hackathons are prototypes and do not directly result in production apps that are available to consumers. Working with Team PILOT at these hackathons were programmers from OpenPath Products, an Annapolis, MD-based app developing company.

PILOT’s Radio Guide app (from the SDL hackathon) resides on the user’s smartphone (left) and is projected to the car’s head unit (right).

For the SDL hackathon, Team PILOT developed the “PILOT Radio Guide” which is designed to help listeners find a radio station that plays the genre of music they are most interested in based upon the location of the vehicle. SDL supports a “projected” technology whereby the app resides on the user’s smartphone and is projected to the car’s head unit (the electronics package that houses the infotainment system) via Bluetooth.

To use the PILOT Radio Guide, listeners launch the app on a smartphone (see screenshot at top left) and selects the genres they are interested in (represented by the green boxes with check marks in them). When the user links a phone to the car, the app displays on the car’s screen the number of stations in that location playing the selected genre. The user can then select a genre and chose from the available stations.

The photo below shows Team PILOT demonstrating the PILOT Radio Guide to the other hackers at the SDL hackathon. The black box on the table is a Test Development Kit (TDK), which has an automotive head unit inside and allows the hackers to test their apps without having a vehicle present.

Team PILOT went in a different direction at the Boston GM event and developed the “Driving Safely with PILOT” app. The app highlights the importance of radio as a means to provide emergency alerts to the public as well as other more detailed information in times of crisis. It also leverages the benefits of the mobile broadband connectivity of the connected car.

Unlike the SDL technology, the “Next Generation Infotainment” (NGI) system used by GM is embedded in the vehicle rather than projected from a linked smartphone. Shown in the screen shot below is how the Driving Safely with PILOT app looks on the car’s infotainment screen. The current radio station is always shown on the display, and the listener has the ability to tune up or down on the radio dial (by touching the arrow icons to the right and left of the station info). 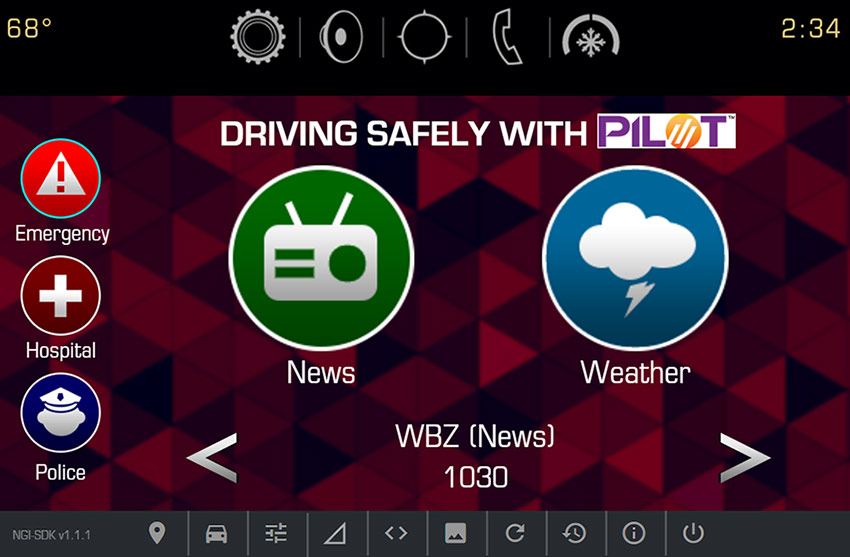 The Driving Safely with PILOT app.

The principal feature of this app is the ability to display an emergency alert on the infotainment screen as well as read the alert using the text-to-speech features of the GM NGI system. This app is designed to deliver Common Alerting Protocol (CAP) messages to the vehicle screen along with any accompanying information like images of weather maps or photos with Amber alerts.

The screen below shows a simulated alert on the vehicle display. The two buttons inside the alert box allow the user to view any images (in this example, a map) or to immediately tune to the nearest news-format radio station. 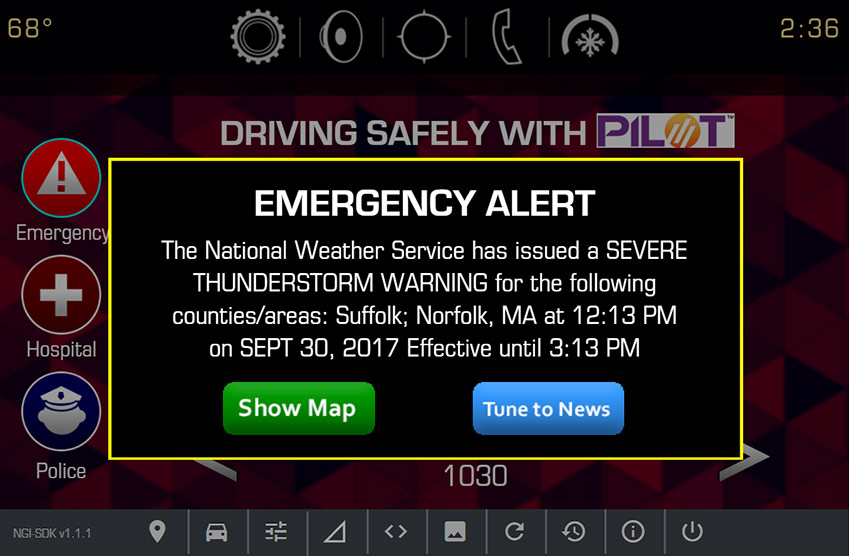 A simulated emergency alert on the Driving Safely with PILOT App.

Other features of this app include the ability to sound an alarm from the car (honk the horn and blink the lights), locate the nearest hospital (based upon the vehicle’s location and using the car’s built-in navigation system), or call the local police.

Actual vehicles were used at the GM hackathon for app testing and debugging. The photo at below shows a Team PILOT programmer working on our app in a 2018 Chevy Impala.

Team PILOT testing the app in a Chevy Impala.

These hackathons have provided PILOT with valuable experience and insights into the world of connected car apps, offered good opportunities to meet and exchange ideas with automakers and highlighted the importance of radio in the digital dashboard.

By David Layer|October 4, 2017|Digital Dash, Blog|Comments Off on Team PILOT Hacking for the Digital Dash