The Truth about ZoneCasting Technology

On June 6, NAB filed comments with the Federal Communications Commission (FCC) on a technology called “ZoneCasting™,” which is designed to create zones for geo-targeting content to listeners using FM boosters. Since FCC rules currently prohibit content origination by boosters, deployment of ZoneCasting would require a rule change, hence the FCC’s interest in this matter.

ZoneCasting boosters are designed to broadcast geo-targeted content that differs from the content broadcast in the main signal, for at least a few minutes every hour. A listener who happens to be traveling from the main signal area into a booster zone when geo-targeted content is being broadcast will hear their radio switch back-and-forth between the two signals, intermittently hearing audio from each. In technical reports filed with the FCC, GeoBroadcast Solutions (GBS), the developers of ZoneCasting, concludes this signal disruption is de minimis and does not effectively impact the listener experience.

NAB has expressed its serious concerns about the effect ZoneCasting would have on the quality of the FM radio service and the business model of the radio industry, and addresses the former in these latest comments. To support its latest filing, NAB, along with National Public Radio (NPR), hired broadcast engineering consultant John Kean to review the GBS technical reports documenting two recent tests of the technology, on which the FCC has requested comment.

Mr. Kean’s expertise on the impact of interference to listeners, and his previous direct experience testing the ZoneCasting system made him the ideal person to review GBS’s recent tests. His resulting study (“NAB/NPR study”) reveals some hidden truths behind ZoneCasting technology and conclusively demonstrates that “ZoneCasting cannot compensate sufficiently for its harm and is therefore broadly unsuitable for FM radio broadcasting.”

Perhaps the most remarkable truth revealed in the NAB/NPR study is that a subjective evaluation study, commissioned by GBS and conducted by NPR Labs in 2013, revealed that listeners found the back-and-forth interference created by the ZoneCasting boosters unacceptable as summarized in Figure 1 of the NAB/NPR study, included here:

Briefly, for the desired-to-undesired (D/U) signal ratios expected in the “transition area” (where a receiver would switch from a station’s main audio signal to the zone-supporting booster), listeners were found highly likely to tune away from the ZoneCasting station. These subjective evaluation results were never revealed publicly until now.

Mr. Kean shows that for station WRBJ-FM (Brandon, MS, subject of one of the GBS reports), ZoneCasting creates widespread and unavoidable interference areas that would have poor audio quality (mean opinion score of 1.6, considered “poor”) and could result in 91% of listeners in the interference areas tuning away when geo-targeted content is being transmitted.

The 2013 NPR Labs study also involved an investigation into listener acceptance of using FM boosters to simulcast a full-service signal, a so-called single frequency network (SFN). The results of that investigation were summarized and published in the Proceedings of the 2013 NAB Broadcast Engineering Conference and have proven useful in helping to design SFN booster systems, but are not generally applicable to ZoneCasting which, when geo-targeting content, is not a simulcast situation. 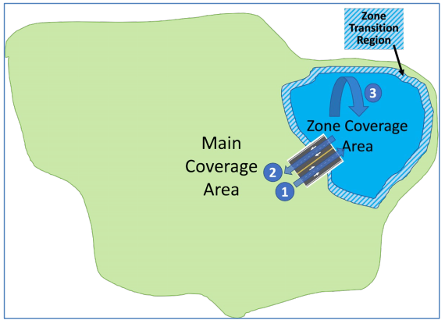 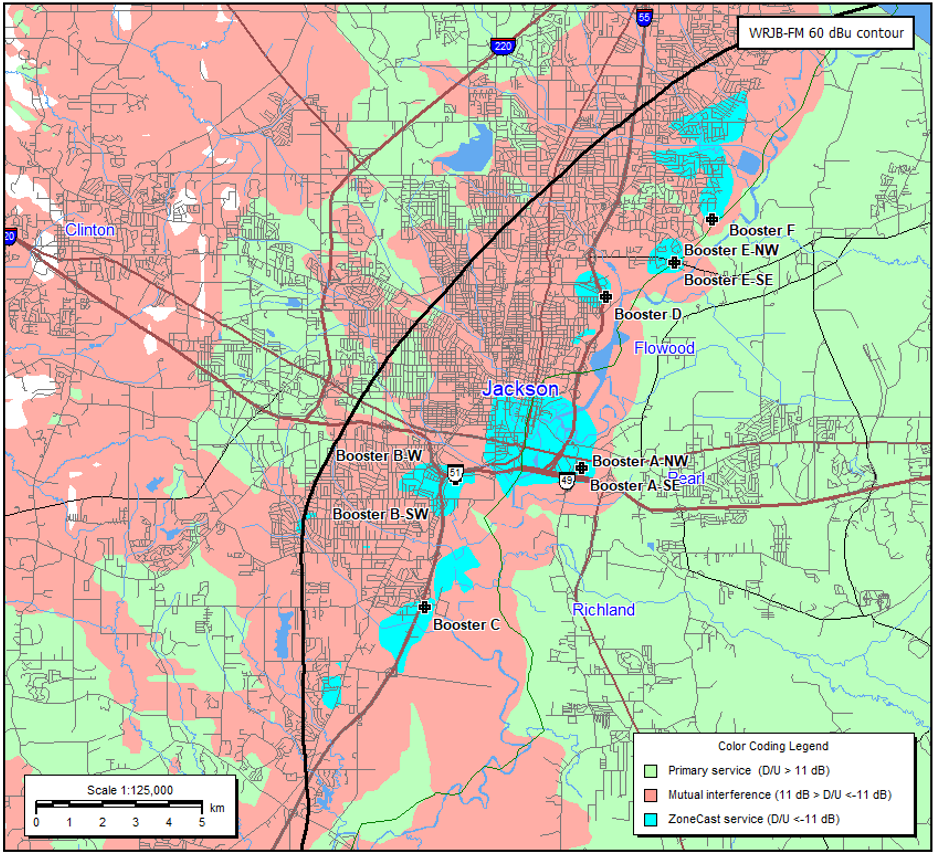 Applying the results of the NPR Labs study to this map, listeners in the red areas would experience poor audio quality and an estimated 91% of those listeners would tune away from the ZoneCasting station under those conditions.

Based on the results of the NAB/NPR study, NAB believes that ZoneCasting technology will result in widespread and annoying interference that will drive listeners away from terrestrial radio. The broad technical claims by GBS are simply unsupported by the two narrow tests it conducted. As detailed in the NAB/NPR study, GBS’s tests of ZoneCasting’s performance were artificially constructed to examine handoff behavior along a short stretch of roadway, completely ignoring the harmful interference that is predicted over large areas. Even in the handoff areas, the tests used a flawed methodology based on multipath to assess interference, rather than one based on listener experience with interfering stations that have different programming.

The FCC is accepting reply comments in the ZoneCasting proceeding until June 21, 2022 which may be filed at https://www.fcc.gov/ecfs/filings/standard. Select proceeding 20-401, Amendment of Section 74.1231(i) of the Commission’s Rules on FM Broadcast Booster Stations.

By David Layer|June 10, 2022|Blog|Comments Off on The Truth about ZoneCasting Technology