KSFY utilizes the latest cutting-edge technology in a new studio that puts the Sioux Falls community front and center.

Building a state-of-the-art studio for KSFY-TV was something Jim Berman, vice president and general manager, KSFY, had dreamt about for years. “When I arrived here in 2010 and looked at what we had, looked at the personnel and saw the great potential in it,” Berman said, he realized that with a modern facility, “we could take this to a whole other level.”

When Gray Television acquired Sioux Falls, South Dakota-based KSFY in 2014, the company’s vision aligned perfectly with Berman’s. The building KSFY had operated out of since 1972 had a lot of challenges — the newsroom was separated from the studio and the sales area was downstairs in the basement, for instance.

The new facility, which occupies the first floor (at 8,700 square feet) and part of the second of a five-story building in downtown Sioux Falls, is only a five-minute drive away from the old one, but it’s a world of improvement. The design team had several goals in mind when planning. For their viewers, they wanted the very best in video and audio quality. For their employees, they wanted the best in technology and safety, the most comfortable workspace and a streamlined workflow. Working with local vendors was also a priority — from the contractor to the architect to their local project manager, they hired local whenever possible. 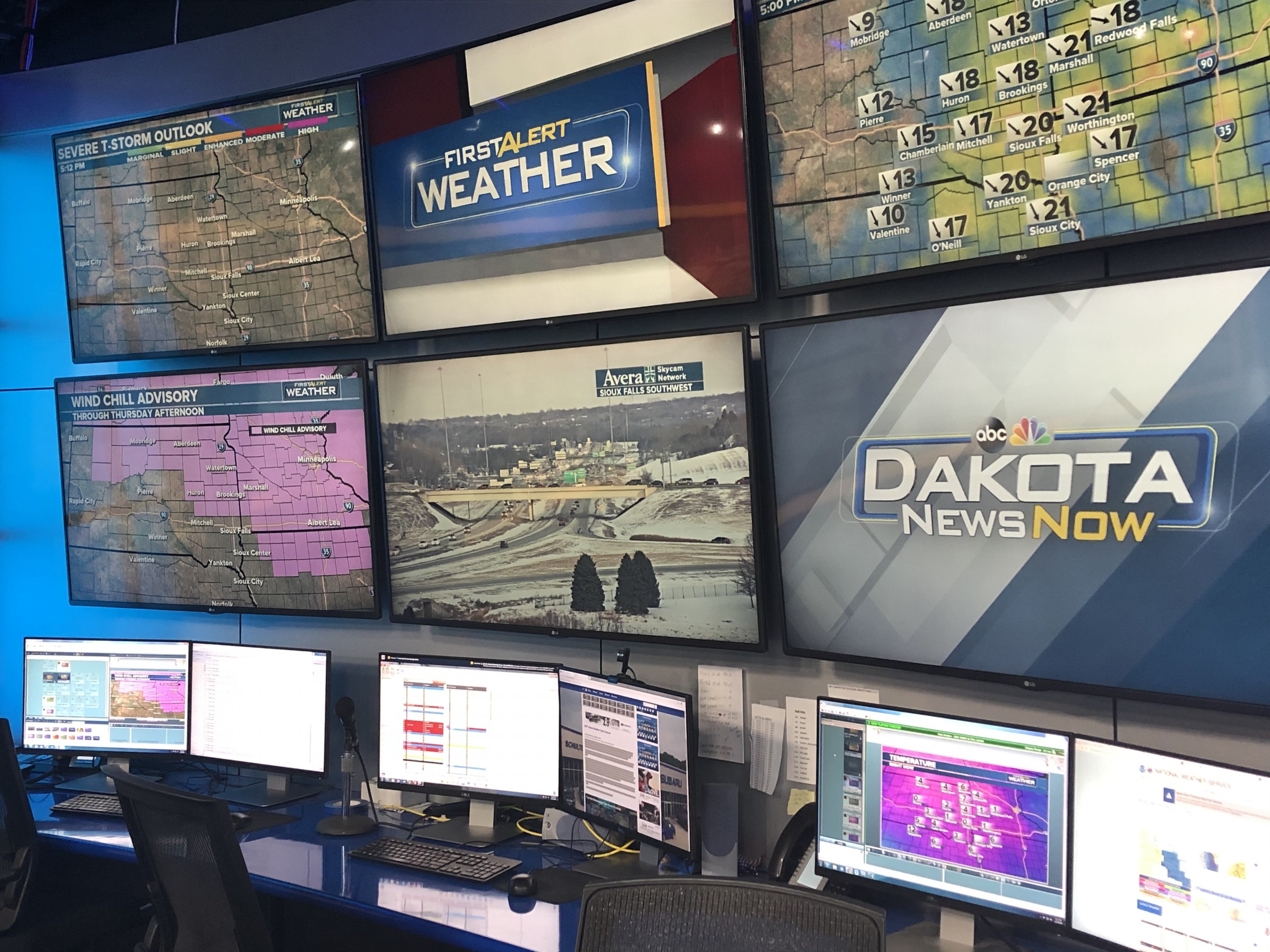 While KSFY’s new studio is stocked with production automation cameras, robotic cameras, new routers, video servers and intercom systems, the heart of the station is in the control room, following a model Gray created a decade earlier. The control room is strategically positioned between the studio and the multimedia assignment desk, which is equipped with several workstations. This helps to streamline the workflow and speed up the process of getting content everywhere viewers are watching, whether it’s to the website, broadcast or a social media platform.

The new open layout makes reporters more visible, so when there’s a breaking news story to assign, it’s easy to see who’s available to take it. And it’s a more social environment now, creating a camaraderie between coworkers that was harder to come by at the old office where everyone was in cubicles. Every workstation in the revamped newsroom has desktop editing, meaning reporters can edit their stories, add their audio and their full-screen graphics from the comfort of their own desks rather than having to go to a communal edit bay to work.

“We’ve put a lot of technology on the backend to empower these people to be able to sit down at their desks and not have to go to the stations to do this,” Mike Fass, vice president of broadcast operations for Gray TV, said. The designers also made a room right off the back door that enables videographers and reporters coming from the field to promptly ingest their video, allowing the newsroom to then distribute it to the website and other platforms right away.

“We have a level of automation now that allows us to do more with less,” Berman said. With their new fully automated control room and strategically efficient environment, they are able to get on the air with breaking local stories much faster. Infrastructure improvements — the new facility houses a big generator, backup power and (uninterrupted power supply unit — ensure the station can deliver critical information to the community 24 hours a day, seven days a week, 365 days a year, regardless of severe weather or a power outage. 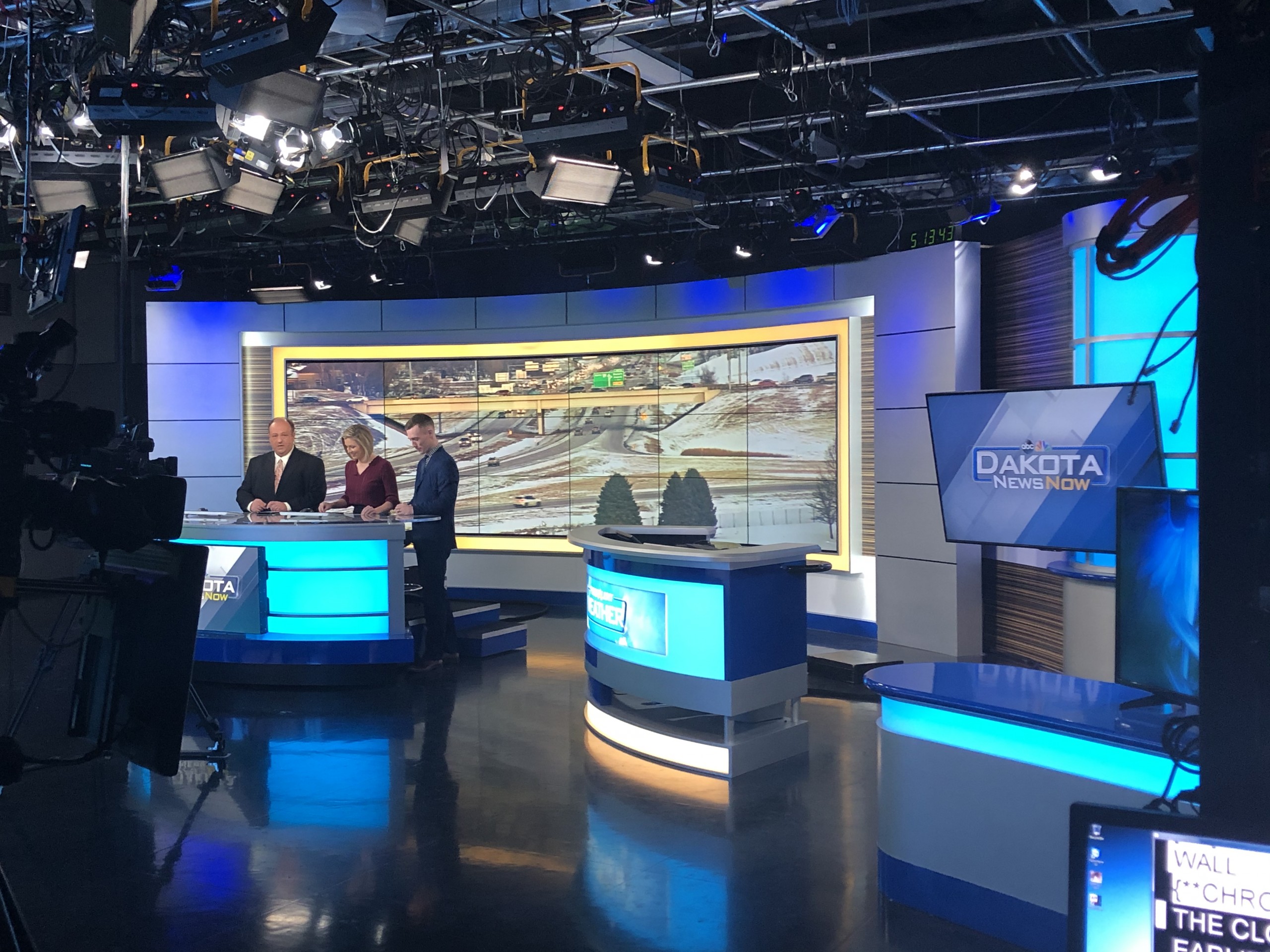 It all comes back to serving the community. Fass sees the new studio as not only an investment for Gray and KSFY but for Sioux Falls as a whole. The building’s many windows were a major draw, enabling viewers to catch a glimpse of what goes on inside the studio. “We wanted to give viewers and the general public the opportunity to walk by and take a peek in, like, ‘Oh wow, they’re doing the news right now!’” Berman said.

They’ve also opened up the new space to the public in the form of Fridays on the Plaza, when the community is invited to join the station for food truck lunch and live music at its outdoor plaza during the summer and Media Camp, a free camp for high school students to learn about broadcasting and even get some air time. The building has also proven to be a wonderful recruiting tool. “When people come in here for a job interview and we give tours,” Berman said, “they’re literally going, ‘Wow!’”

In the months and years ahead, KSFY is anticipating further expansion and more opportunities to grow its brand. “If you’re going to move forward, which you have to do, you have to have the latest technology,” Berman said. “And we are very fortunate to be part of a company that really embraces and wants to be on the cutting edge of that next thing.”