Drones allow TV stations to cover news in unique ways — and WSB-TV in Atlanta is setting the bar.

During his nearly 40 years of working in TV, Brian Smith, director of News Technology at Cox Media Group’s WSB-TV, has seen a lot of dramatic transformation in technology. But being on the team at the forefront of using drones for news coverage has been particularly special. “Drones offer a very unique perspective and it’s now an integral part of our newsgathering,” Smith said. “It’s pretty amazing how quickly it’s evolved and become a differentiator.”

The television and digital station received permission — officially called a Section 333 exemption — from the Federal Aviation Administration (FAA) to legally fly drones in September 2015, but the road to get there wasn’t easy. A team of newsroom leaders, pilots, lead engineers and executive producers led by meteorologist Brad Nitz had spent a full year working behind-the-scenes to get WSB certified. The idea to incorporate drones into the newsroom had originally come up in a meeting around August 2014 when Smith first joined WSB. “Everybody was very excited about it because Cox Media Group has always placed a premium on innovation,” Smith said, “and this was such a burgeoning area of innovation.”

Logistically speaking, getting approved to fly before 2016 was an achievement not to be underestimated. That was the year the small drone rule, Part 107, which made things less complicated and more streamlined than the Section 333 exemption, came out. But in 2015, WSB had a secret weapon, several in fact. By pure coincidence, WSB had several licensed pilots on staff — one of the requirements of becoming exempt under Section 333 — including Cliff Rogers, who flew the inaugural September 2015 flight. This gave them a huge advantage over other networks that would have to start from scratch. 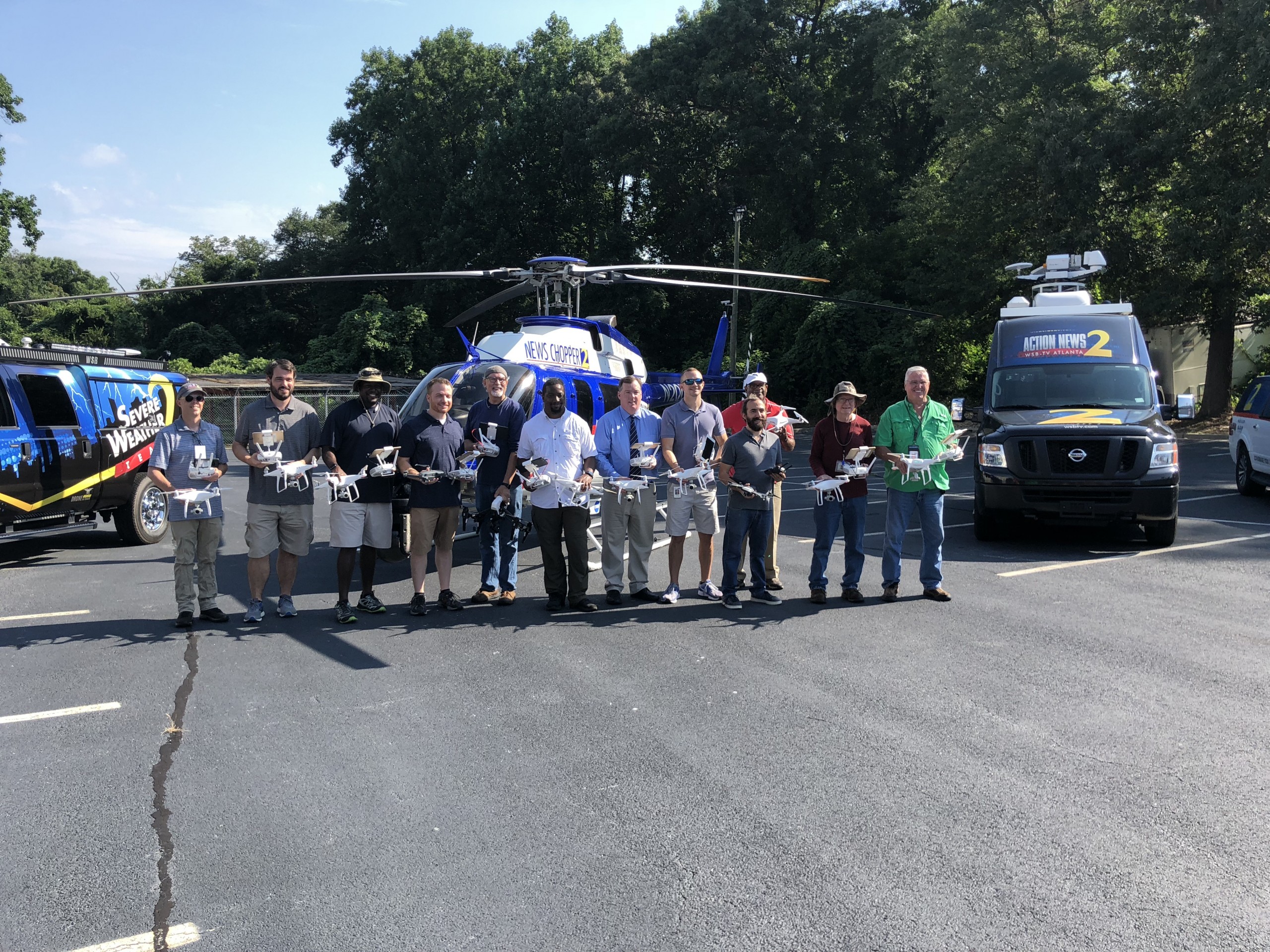 Now they have 14 pilots in-house and 15 drones, and they’re looking to add even more in the near future. Since integrating drones into the workplace, they’ve had hundreds of flights. Weather permitting, they fly almost daily, and they use drones to cover everything from weather catastrophes and their aftermath to everyday events. Drones offer context and perspective and often give stories an immersive feel in ways that regular cameras or choppers can’t.

“There are some stories that you really can’t tell without a drone, at least in a meaningful way,” Smith said. For example, while they were covering rebuilding efforts in the wake of Hurricane Michael in Georgia, they reported an exclusive with live aerial of one of the farms where many pecan trees had been damaged and farmers were starting to replant. “You just get such incredible perspective on that,” Smith said. The drone’s unique viewpoint allowed them to really immerse the audience deep into the story.

When Hurricane Florence came through the Carolinas in 2018, drones allowed them to get a rare before and after perspective of the coastline that would have been impossible to pull off otherwise. 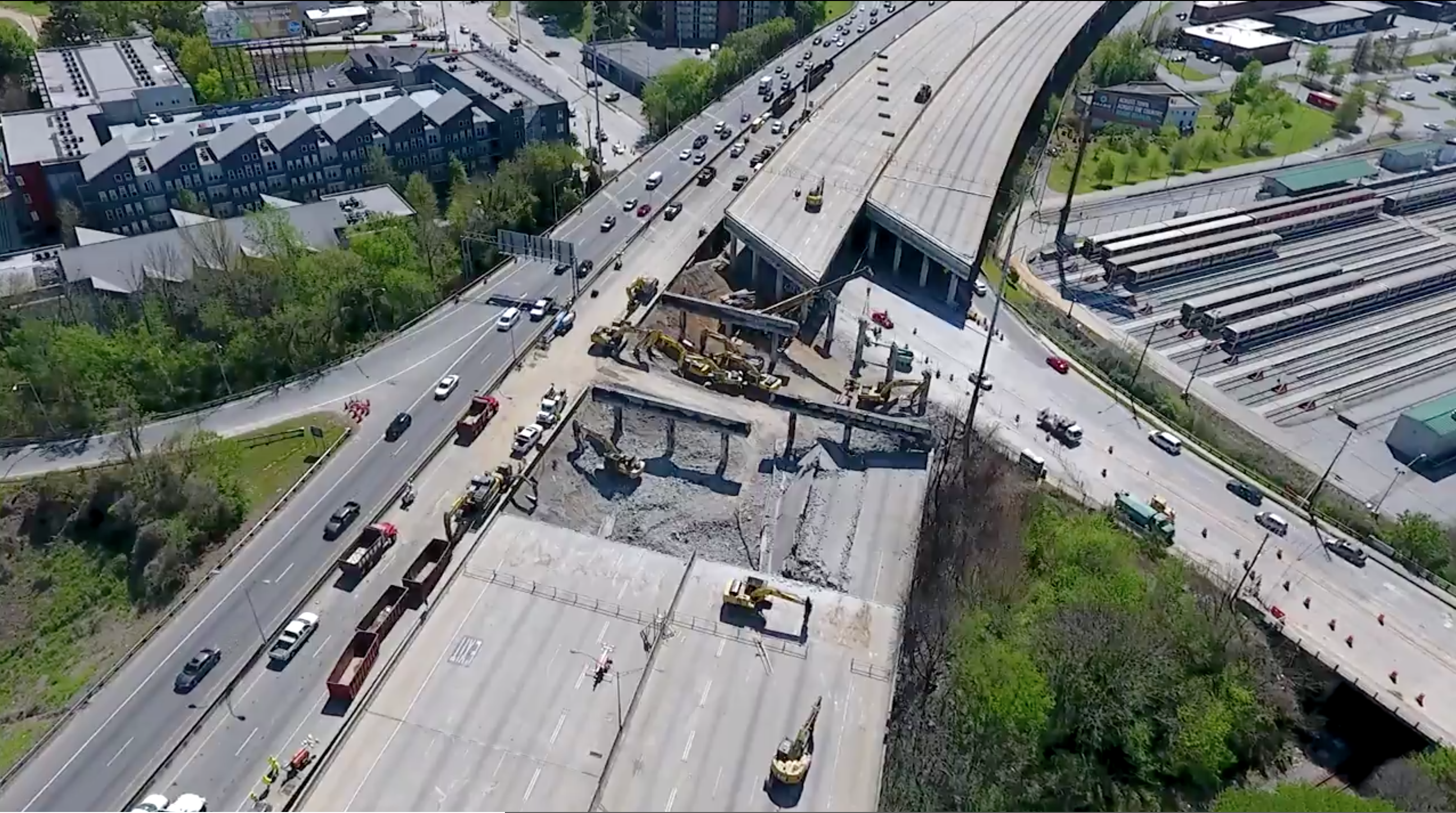 Sweeping drone aerials capture a story’s magnitude in a way that’s unparalleled, and they work for much more than just documenting disasters. For another WSB story, a drone followed a reporter as he made his way through a corn maze, rather than just showing him standing in front of it. Drones have been instrumental when reporting on sinkholes, too, a phenomenon in Georgia that WSB has covered extensively, including one that encircled a gas station in nearby Gwinnett County. In one case, they actually flew a drone directly into a sinkhole. “Drones give you a unique vantage point, an intimate perspective because they fly at lower altitudes and have the ability to hover over certain scenes,” Smith said. “It’s a fascinating new resource. Drones really take the viewer along with them.”

WSB is now using drones in about three to four stories of the 15 to 17 they produce every day. There’s no real formula; it’s more a matter of a reporter asking themselves if a drone will advance a story in a meaningful way. Eventually, though, Smith sees drones becoming an essential tool for most stories. As part of that, WSB offers internal workshops a couple of times a year for journalists aspiring to become drone pilots, in which in-house pilots help them prepare for the Part 107 test.

“Drones have transformed local newsgathering and will only continue to grow and offer unique and compelling immersive images,” Smith said. “As the technology improves, their role will become more and more important.”