It’s time to celebrate this year’s NAB Engineering Achievement and Digital Leadership Award winners. Of course, we must announce the winners first.

This year, we’re doing both at the same time.

On Thursday, June 17 at 2 p.m. ET, we’re hosting a special session on NAB Amplify titled “The Future of Media and the NAB Technology Awards.” During this event, we’ll reveal each award winner and honor their achievements and leadership in our industry. Then, you’ll get to get to hear directly from each recipient as they accept the award. 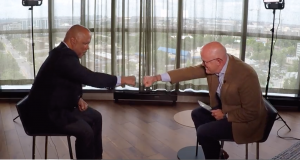 To kick off to the celebration, we’ll hear from Mike Chapman and his thoughts on the future of media. Mike is a partner and Americas Lead at Kearney and will discuss the trends we must pay attention to with Sam Matheny, executive vice president and chief technology officer at NAB. This discussion will entertain, enlighten and challenge all of us as we try to look farther into the future.

Mike will outline how broadcasters should be thinking about technology capabilities and the potential resource investments to consider for those capabilities. He’ll give his thoughts on augmented reality, edge computing, Next Generation TV, hybrid radio, 5G, AI and even low-Earth-orbit (LEO) satellite constellations.

We’re proud to carry on this tradition that started over 60 years ago, and we’re excited to continue it in this new form of celebration.

Each year since 1959, NAB has presented the Engineering Achievement Award to an individual for their outstanding accomplishments in the broadcast industry. In 1991, the Association began giving two awards – one for achievements in radio and the other for television.

The Digital Leadership Award began in 2015 and is given annually to honor an individual at a broadcast station, group or network who has had a significant role in transforming a traditional broadcast business to succeed on digital media platforms in a measurable way through the use of technology, mobile applications, social media, or web-based information management and marketing.

Register for NAB Amplify and join us on June 17 to honor the 2021 award winners’ engineering and digital leadership.

Mike Chapman was the primary author of PILOT’s research report “The future of media innovation on the edge: Perspectives in edge computing for broadcasters,” which was released in April.

By John Clark|June 8, 2021|Blog|Comments Off on Time to Announce, Celebrate the NAB Technology Award Winners