UNC-TV won the PILOT Innovation Challenge in 2017 for their system that utilizes ATSC 3 to alert first responders of an emergency, and on May 17 they completed the first successful test of their system, broadcasting an emergency announcement from a 911 dispatch center via the ATSC 3 system.

…in emergency situations, a matter of seconds can be the difference between life and death.

I spoke with Fred Engel, the senior director of technology at UNC-TV,  at NAB Show 2018. He gave a powerful example of how important this system is. He used a recording of an actual dispatch call for a fire in St Louis and showed a video of a fire taking hold in a small room. It took 67 seconds for the first responders to be notified, by which time the small fire on the video had engulfed the room. The current system only handles one alert at a time, meaning other calls must wait, and in emergency situations a matter of seconds can be the difference between life and death. 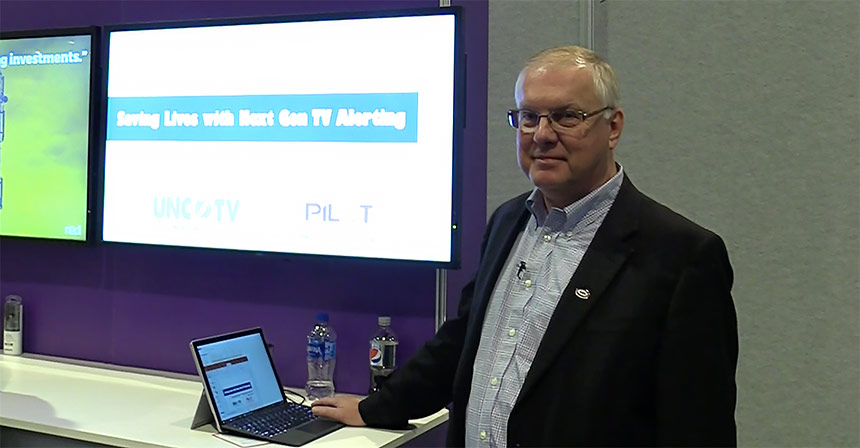 The UNC-TV system uses ATSC’s next generation broadcasting technology to reach first responders in a matter of moments, providing on screen information to get the first responders all the information they need to know to get to people who need help faster and save lives. The proof of concept consisted of a non-public facing experiment to ascertain the technical ability and agility of the ATSC 3 broadcast standard. The test proved that the advanced transmission and audio/visual coding techniques can go beyond consumer uses to include the public safety community.

UNC-TV’s successful test demonstrates the potential of ATSC 3 as a platform for new innovation.

“These first test announcements,” said Red Grasso, the North Carolina FirstNet Single Point of Contact, “will be the basis for further development of the concept, which seeks to deliver critical dispatch information to first responders in a far more expedient fashion utilizing the capabilities of ATSC 3.0.”

UNC-TV’s successful test also demonstrates the potential of ATSC 3 as a platform for new innovation. There is great excitement over UHD broadcasts, interactive applications and immersive audio, but UNC-TV has shown that some exciting features of ATSC 3 are the ones yet to be discovered.