Versatile Video Coding (VVC) is the latest published video codec standard, and it has achieved the highest level of video compression to date.  VVC has been drafted by a joint collaborative team of ITU-T and ISO/IEC experts known as the Joint Video Experts Team (JVET), which is a partnership of the ITU-T Video Coding Experts Group (VCEG) and ISO/IEC’s Moving Picture Experts Group (MPEG). The VVC standard—also known as H.266 or MPEG-I Part 3—was finalized in July 2020, and it has created a buzz in the industry since then.

New video codecs are important to TV broadcasters because they allow more content to be transmitted in a given transmission bandwidth. In addition, Next Generation TV allows other uses of broadcast bandwidth, such as datacasting, so the more efficiently video content can be carried by a broadcast channel, the more bandwidth remains for such alternate usage. At the time of its drafting, the ATSC 3.0 standard adopted HEVC, which was the most advanced video codec available. ATSC 3.0 is an inherently extensible format, however, and it envisions the addition of other codecs over time. ATSC’s Planning Team 4’s Report Summary on Video released in November 2019 discusses how new codecs might be introduced into the ATSC ecosystem. VVC may also find application elsewhere in the broadcast environment, such as for remote backhaul applications.

The whitepaper “Comparing VVC, HEVC and AV1 using Objective and Subjective Assessments,” compares the video compression efficiencies of the VVC and HEVC codecs, along with that of another recent codec, AOMedia’s AV1. For objective measurements it compares the codecs’ efficiency for delivering the same Peak-Signal-to-Noise-Ratio (PSNR) and Video Multi-method Assessment Fusion (VMAF) values (two well-accepted objective video-quality assessment metrics), for both UHD and HD video formats. According to the paper, for the same video quality rendered by HEVC encoder, AV1 and VVC codecs provided about 6% and 29% more compression respectively. The graphs below show the relative compression efficiencies of the encoders for each of the two quality metrics on both UHD and HD video content. 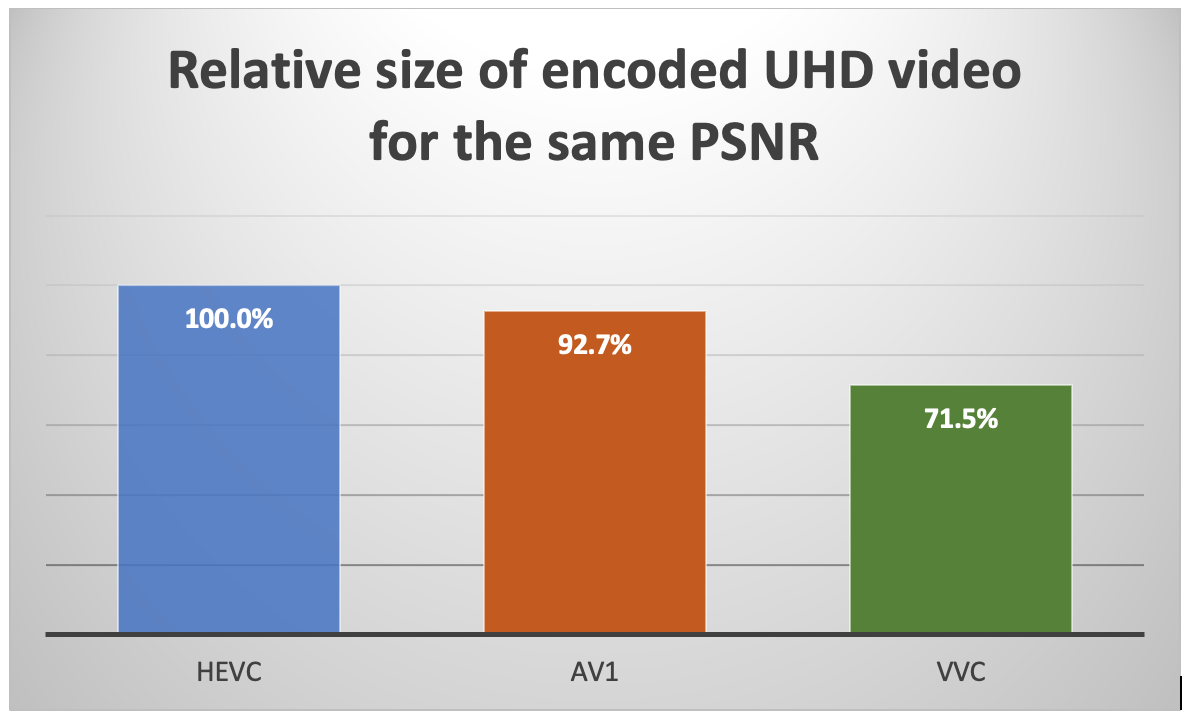 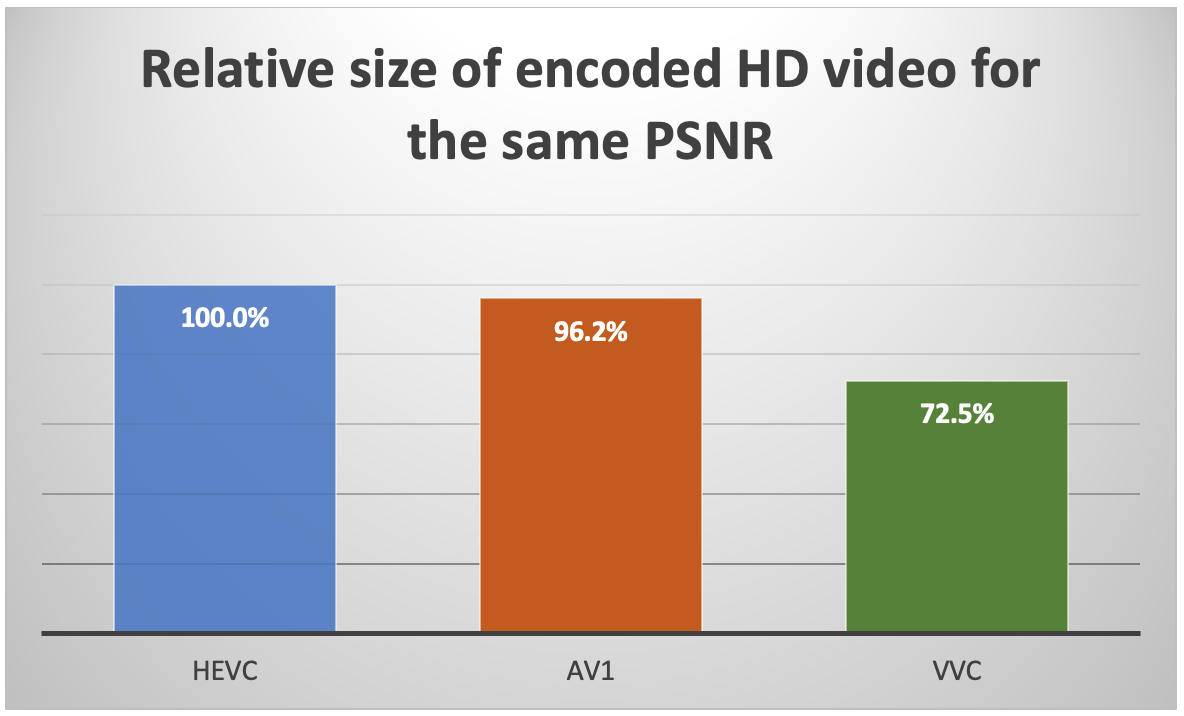 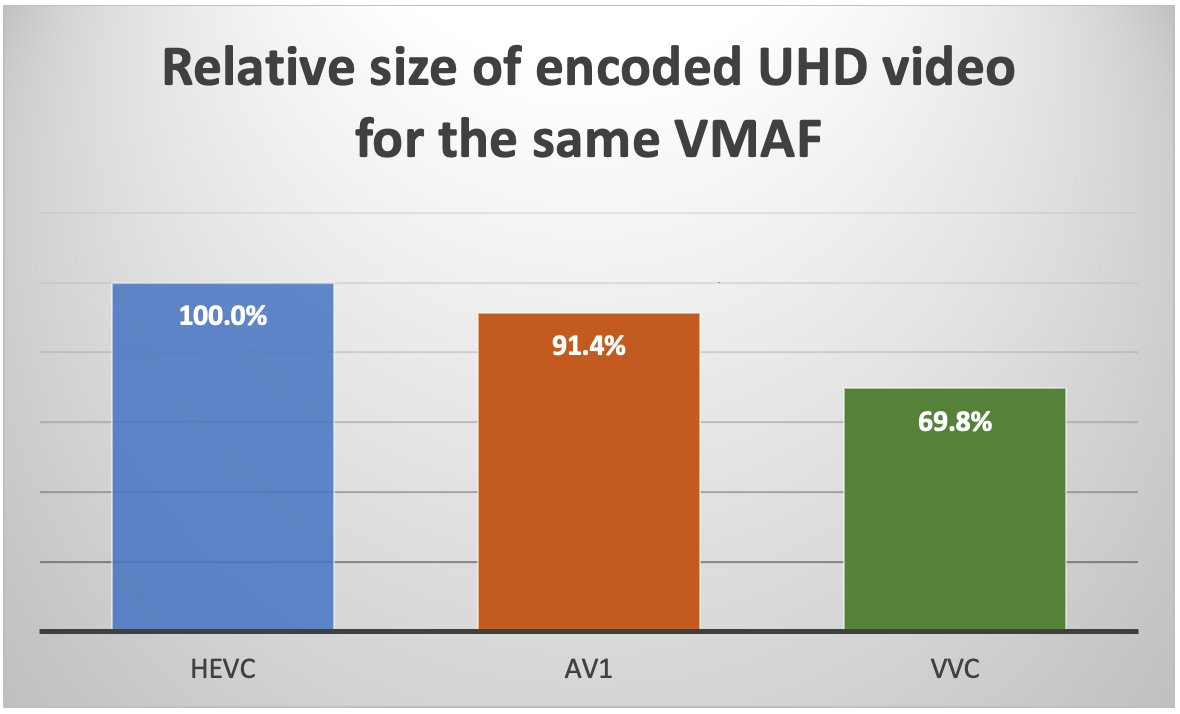 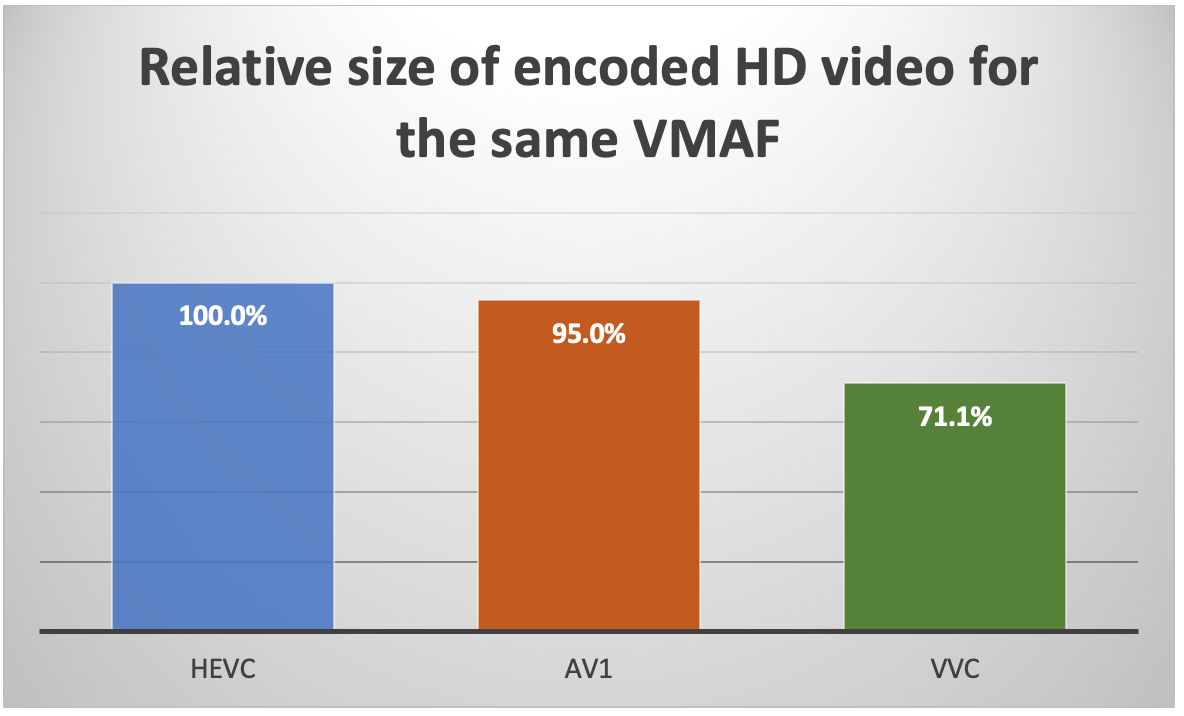 The encoding complexity of VVC is seven to nine times more than that of HEVC. It is interesting to note that AV1’s complexity turned out to be higher in this test. 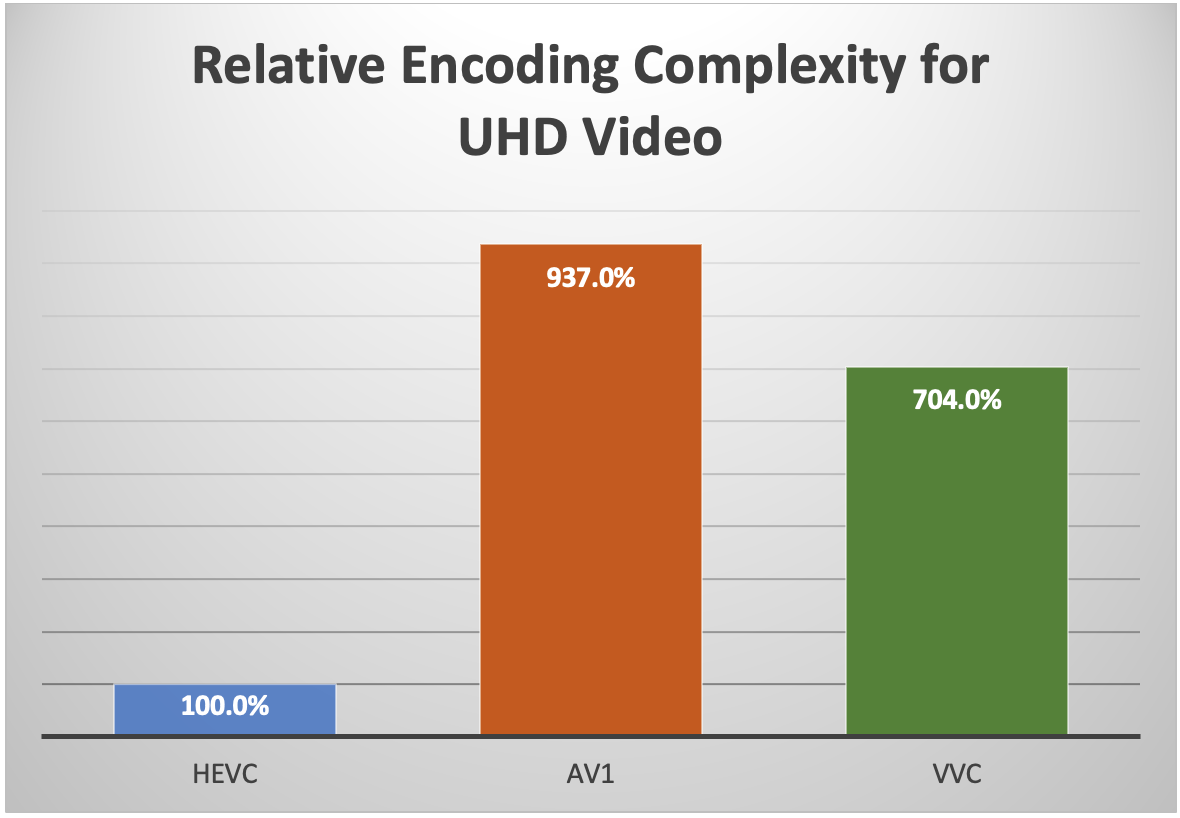 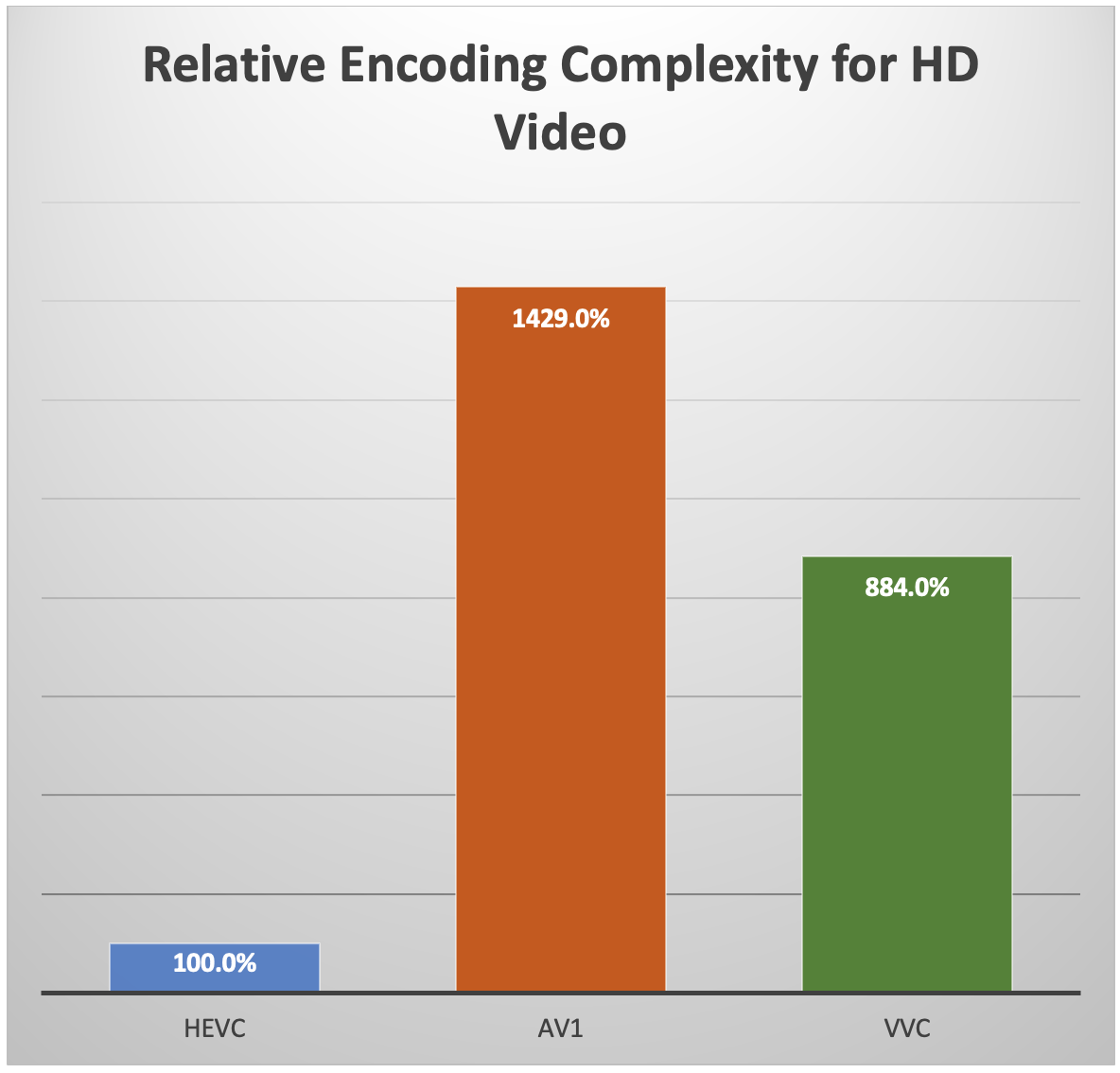 The licensing and intellectual property (IP) issues of VVC are unknown at the time of writing this blog. According to a press release, 45 companies including Ericsson, ETRI, Huawei, Intel, Maxell, Mitsubishi Electric, NHK, NTT DOCOMO, Panasonic, Siemens AG, Sony and Tencent have claimed that they own essential patents of the VVC standard, and these companies have recently met to strive towards forming a single patent pool. While this is good news, the above-mentioned press release by the Media Coding Industry Forum (MC-IF) did not mention the names of some of the VVC heavyweights such Fraunhofer HHI, RWTH Aachen University, Qualcomm and Microsoft. In summary, the royalty costs of VVC are unknown at this moment.

Although broadcasters could potentially become heavy users of the codec, they are not the only stakeholder that may influence the wide adoption of the VVC standard. Streaming video providers, browser companies, smartphone manufacturers and computer manufacturers all exert influence on video codec adoption today. These industry sectors will evaluate all of these codecs’ implementation complexity and intellectual property licensing costs against compression performance. If the market forces are favorable, VVC might then be added to the ATSC standard toolbox, and/or in other professional broadcast tools.

Meanwhile, TV broadcasters should track the progress of the VVC codec to gauge if and when to embrace it.

By Tariq Mondal|October 27, 2020|Blog|Comments Off on VVC Codec’s Potential in Broadcasting