Which AM Station will be Next for All-Digital?

Radio broadcasters from around the country converged on Dallas last week for the 2019 Radio Show, co-produced by NAB and the Radio Advertising Bureau (RAB).  Kicking things off was the first-ever “Tech Tuesday,” a full-day educational conference providing today’s busy radio engineering professional with practical and timely knowledge to improve overall station efficiency and performance, as well as to further engineers’ career development.

NAB EVP and CTO Sam Matheny welcomed the crowd of about 100 attendees, highlighting the various technology projects which NAB, through the PILOT innovation initiative, has been pursuing, most notably PILOT’s extensive testing of all-digital AM radio (more on this below).  Following Sam was broadcast consulting engineer (and 2019 NAB Radio Engineering Achievement award recipient) Gary Cavell, of Cavell, Mertz and Associates, who offered an inspiring keynote address on the importance of mentoring new engineers and encouraging both new and experienced engineers to “exit their comfort zone” to develop new and relevant skills.

Following some manufacturer breakout sessions, the first panel of day, “AM Radio’s All Digital Future?” convened, moderated by this blog’s author and including Russ Mundschenk, senior manager, Broadcast Engineering, Xperi, and Dave Kolesar, senior broadcast engineer, Hubbard Broadcasting, Washington, DC.  Information on the PILOT all-digital AM lab and field test projects was presented, as was a brief history of the development of all-digital AM by Xperi (formerly iBiquity Digital Corporation, inventors and licensors of the HD Radio in-band/on-channel (IBOC) digital radio technology used in the US.

Arguably the highlight of this panel was the update provided by Mr. Kolesar on the first (and only) all-digital AM radio station in the US, WWFD-AM (820 kHz, Frederick, MD) which has now been on the air under experimental authority from the FCC since July 2018.  There was a lot of information provided on how WWFD is doing, along with background information from the other panel participants on all-digital AM in general, but one question in particular loomed over this discussion – which station will be next?

Over the last year, WWFD has been providing the listeners of this adult album alternative (AAA)-format station (going by the name of “The Gamut”) with a noise-free, high-fidelity AM radio listening experience, unequalled by any other AM station in the country.  Mr. Kolesar reported that for the first time ever, WWFD showed up in the Nielsen ratings (Spring 2019, market #192, Frederick, MD), which he attributes to the all-digital AM station specifically, noting that WWFD’s FM translator has been on the air for two years with nary a rating point. 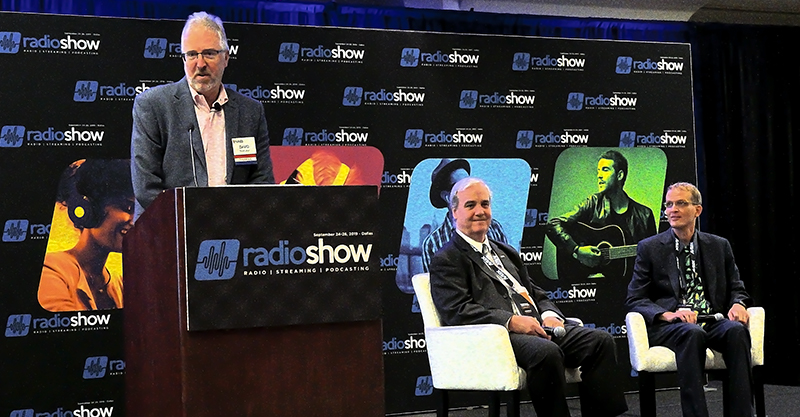 An important point raised during this session was the fact that there are now over 60 million HD Radio receivers in automobiles across the US, and Xperi data indicates that in the Washington, DC region (immediately adjacent to the Frederick, MD market), roughly 25% of all vehicles currently on the road have HD Radio receivers built-in.  All of these radios are capable of receiving the all-digital AM signal (not just the analog-digital HD Radio signal currently authorized by the FCC).

Clearly, good receiver penetration is a pre-requisite for making the switch to all-digital since listeners with analog radios will no longer be able to receive the signal.  During the first year of WWFD experimental operation, Mr. Kolesar, working with Xperi and transmitter manufacturer Nautel, did some important troubleshooting which resulted in significant improvements in the all-digital AM signal performance being experienced by these receivers, and highlighting the need for pioneering stations like this to conduct experimental operations and uncover technical issues that will only be revealed by full-time station operations.

One issue uncovered during this first year of WWFD operation pertained to receiver acquisition as well as to the operation and reception of the “enhanced mode” digital subcarriers.  The HD Radio all-digital AM signal (formally referred to as operational mode MA3) consists of two digital subcarrier groups: the core mode groups (shown in the figure below in orange), which are the strongest and receivable over the majority of the WWFD listening area, and the enhanced mode groups (shown in blue), reduced in power compared to the core mode groups but increasing the digital capacity of the signal by about 20 kbps and providing support for enhanced services such as Artist Experience (delivery of album art images to receivers using the HD Radio signal). 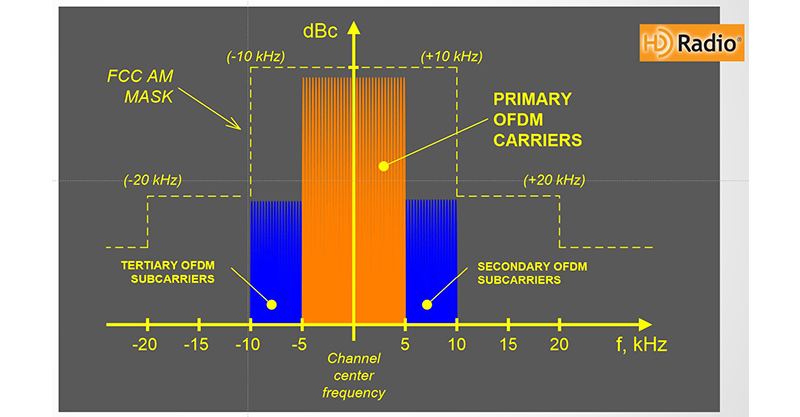 Initially, WWFD was unable to properly function in enhanced mode, resulting in reduced performance and increased acquisition times in receivers.  Working with Xperi and Nautel, Hubbard engineers discovered a bandwidth limitation in their existing (and older) pulse duration modulation (PDM) transmitter.  Once this problem was corrected, both the acquisition time in receivers and reception of enhanced mode digital subcarriers improved significantly.

Again, the burning question is, which station will be next?  In March of this year, Bryan Broadcasting Corp. submitted a Petition for Rulemaking to the FCC requesting authorization of the MA3 all-digital AM mode of operation, which would allow AM broadcasters to (on a voluntary basis) switch to all-digital operations.

One of the best ways that AM broadcasters can demonstrate their support for all-digital AM right now is to request experimental authority to conduct all-digital AM operations, as WWFD has done (in July 2019 their experimental authorization was renewed for another year of operation).  Stations that have FM translators covering their city of license (this is the case for WWFD) are particularly well-positioned to make the move to all-digital AM, as they will still be able to serve customers with analog-only receivers using the FM translator signal.

Please contact me at dlayer@nab.org if you would like to learn more about all-digital AM and for information on how to initiate all-digital service.

By David Layer|October 1, 2019|Blog|Comments Off on Which AM Station will be Next for All-Digital?