Why I Started Fighting Misinformation

It was the summer of 2016. One day while scrolling through my news feed, I found an article that perfectly demonstrated a political position I felt strongly about. The only problem: it wasn’t true. My friends quickly sprang to the rescue, publicly letting me know this was junk news.

After more research, it became clear: I was duped. It stung.

I went searching for a way to make this right… but I discovered that there wasn’t any meaningful action, other than deleting the post, that I could take.

As a successful tech entrepreneur, this was deeply embarrassing. While I didn’t realize at the time how monumental that post was for my life (and therefore didn’t save the link anywhere) – it forced me to start brainstorming solutions on how the public could fight misinformation.

My journey as an entrepreneur started when I was 14 years old. After running an online BBS in middle school, I began learning about this amazing phenomenon, called the internet. But, I was in a suburban Ohio county where all Internet access required placing an expensive long distance phone call (yes, with a modem).

I was determined to find a way to get online for free. This lead me to start my own Internet Service Provider, run out of my parents basement. I was still 15 at the time. My parents helped me to develop the business plan. I raised $15k in friends/family capital, and built and managed the ISP myself (I had a T1 internet connection at my parent’s basement in 1996). Before going to college, I sold the company for a nice exit. 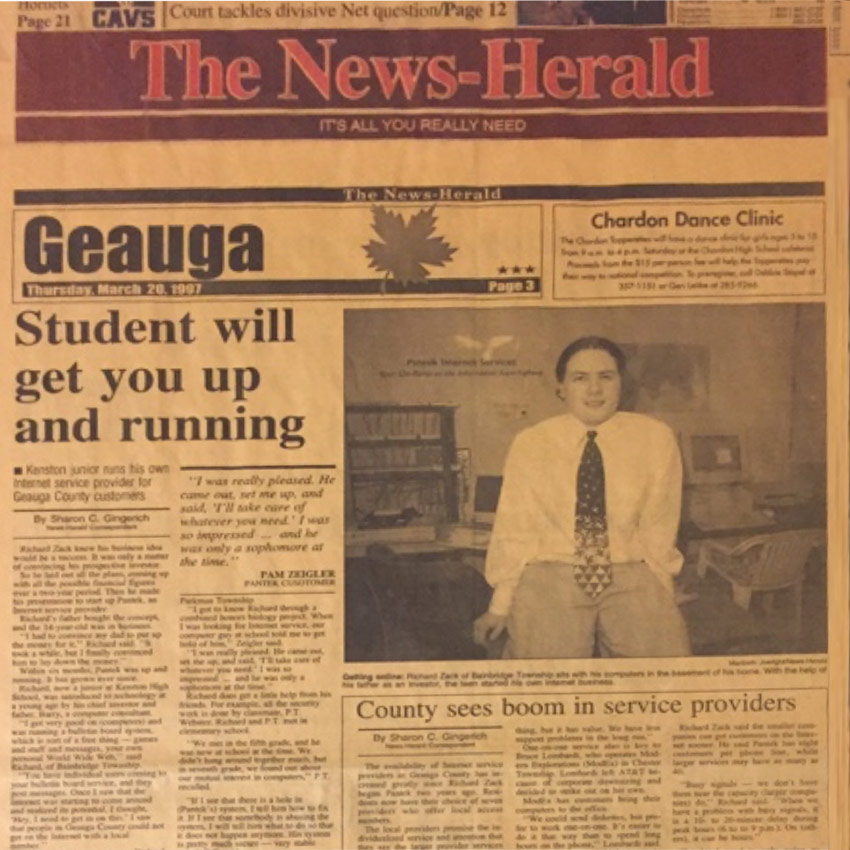 Richard’s first news appearance – 3/20/1997 in The News-Herald. While he looks a little different now, he assures us he still has the same tie.

Two years later, I noticed a gap in the market for service providers of Linux and Open Source software – the technology I used to build the ISP. Companies had to choose between the guy in his parents’ basement, or IBM.

I was fascinated by Linux and the Open Source philosophy, and again, felt that this technology would change the world. Unlike existing closed-source software models, the promise of Open Source was that anyone and everyone could see the source code – the “blueprints” of the software – they were using. Even more importantly, it meant hundreds of thousands of developers around the world could, for the first time ever, truly work together to produce amazing software that anyone could use – essentially, for free.

So, I founded Pantek, an enterprise Linux and Open Source managed service provider. Our mission was to provide services to companies who were using Linux & Open Source Software (and, to change the world).

Seven years and three acquisitions later, we grew to over 1,000 clients across 35 countries and 50 states, with a team of over 18 working in our base in Ohio, and remotely. 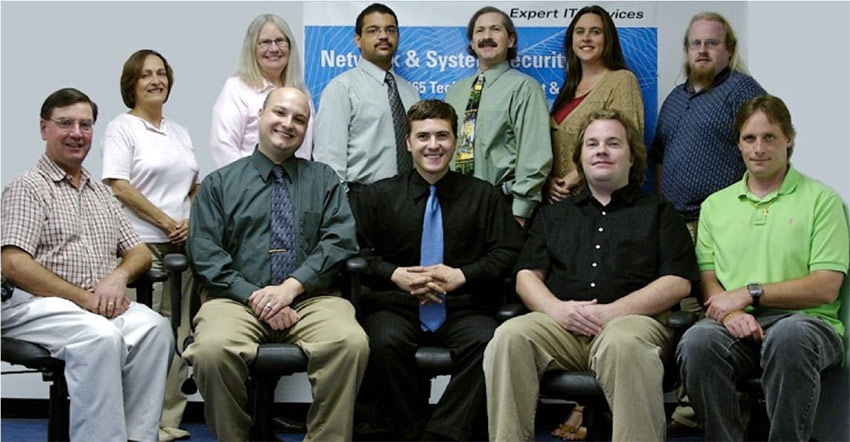 In 2007, with business booming, we started receiving offers to sell the company. I sold 95% of my stake to a group of private investors, packed up my Pontiac Grand Prix, and moved to Brooklyn, NY.

I had always had a love of music, and with the rise of iTunes and the Internet, I believed that the music business model was fundamentally changing for the better, and I wanted to be a part of it.

Richard standing next to Kevin Wommack, manager of Los Lonely Boys, in Austin, TX in front of their platinum albums.

It was somewhat successful, however, after my first daughter was born in 2013, we decided to move upstate to the Capital Region of NY. Pantek was in the market for a new CTO, and re-hired me to manage the team remotely.

“I believed in the Internet as a positive force for good in this world and couldn’t live with this vision being tainted by misinformation” – Richard Zack, founder, Our.News

Then came the fateful day when I shared that junk news.

For my whole adult life, I believed in the Internet as a positive force for good in this world and couldn’t live with this vision being tainted by misinformation. I committed to changing the Internet (and therefore, the world) for the better and started on my life’s work of combatting misinformation, by founding Our.News.

The mission of Our.News is to combat misinformation by making it easier for anyone to fact-check and rate news. We do this by arming the public with all the tools and information needed to make a quick determination between real and junk news. The platform is non-partisan and transparent, providing both validated information on news publishers (verified by the Freedom Forum Institute at the Newseum), and leveraging the wisdom of the crowd to determine the public’s view of the veracity of news articles, publishers, and journalists.

On October 2nd, 2018 we officially announced our joint venture with the Freedom Forum Institute at the Newseum, in Washington DC, along with the launch of our first product: Newstrition. This product encapsulates our mission – in the form of both free public browser extensions –and- SaaS tools for media publishers & aggregators – by making it easy for anyone to fact-check and rate any news article, anywhere.

The launch was immediately followed by a panel discussion on misinformation and rebuilding trust in journalism. As we’re a non-partisan platform, it was critical for us that this discussion include leading voices from all sides of the political spectrum. Moderated by The Hill’s Joe Concha, other panelists included:  Louis Jacobson, Senior Correspondent at Politifact;  Amy Eisman, Director of Journalism for American University; Stephanie Hamill, Contributor at The Daily Caller; and Richard Zack, Founder of Our.News. 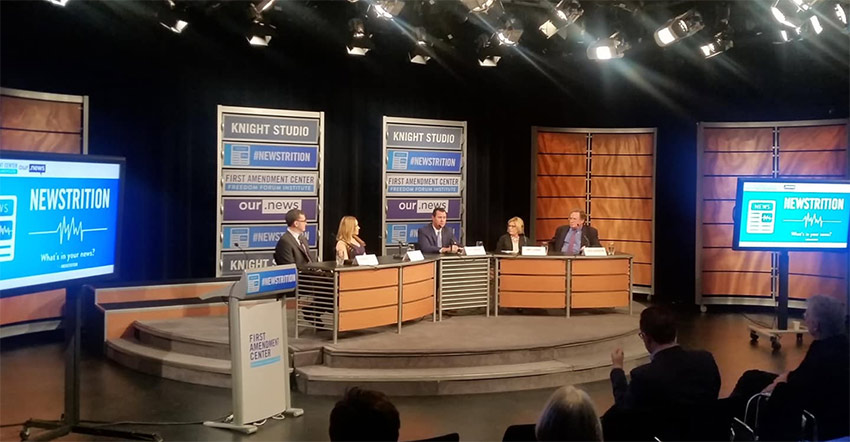 The panel was moderated by The Hill’s Joe Concha, and included panelists Louis Jacobson, Senior Correspondent at Politifact;  Amy Eisman, Director of Journalism for American University; Stephanie Hamill, Contributor at The Daily Caller; and Richard Zack, Founder of Our.News.

The panelists concluded that to rebuild public trust in journalism, the public must participate, be engaged, and be heard. It is for this reason Our.News feels strongly about allowing public news ratings. While the public may not always “get it right”, we believe their opinion matters, and that trust can be rebuilt when publishers listen.

We are thrilled to be under consideration for investment as a finalist in the 2018 NAB PILOT Pitch Prize competition, and are very much looking forward to the event. Our platform has been built to make fact-checking and news ratings easier on all platforms, including set-top digital media players. We believe that with the support and backing of NAB, we can truly help make a difference in the fight against misinformation.

About Our.News: Our.News is a startup devoted to fighting misinformation. Our.News makes it easy for anyone to fact-check and rate the news, arming the public with the tools and information needed to make a quick determination between real and junk news. It uses a combination of crowdsourcing and proprietary algorithms to provide neutral background data, ratings, sources and more. The platform is non-partisan and transparent, providing validated background information on news publishers and presenting the public’s assessment of the veracity of news articles, publishers and journalists. Our.News delivers services in partnership with the First Amendment Center of the Freedom Forum Institute at the Newseum, in Washington, DC. For more information, visit https://Our.News or follow Our.News on Twitter at @OurDotNews.

By Richard Zack|October 17, 2018|PILOT Pitch Prize, Blog|Comments Off on Why I Started Fighting Misinformation