All Digital AM Radio Testing

PILOT’s predecessor, NAB Labs, conducted an all-digital AM IBOC test project with the goal of fully developing a performance record of operation in this mode. This work is proving instrumental as the FCC considers (Fall 2020) allowing AM broadcasters to use all-digital AM on a voluntary basis (currently an experimental authorization is required). Prior to this project, very little technical information on all-digital operation had been entered into the public record.

From December 2012 to October 2014, NAB Labs worked with a number of broadcasters and transmission equipment manufacturers to conduct field tests of all-digital AM. Tests were conducted at nine locations (see graphic), spanning a variety of station types and geographic locations. This work was summarized in a technical paper that was published in the Proceedings of the 2015 NAB Broadcast Engineering Conference. 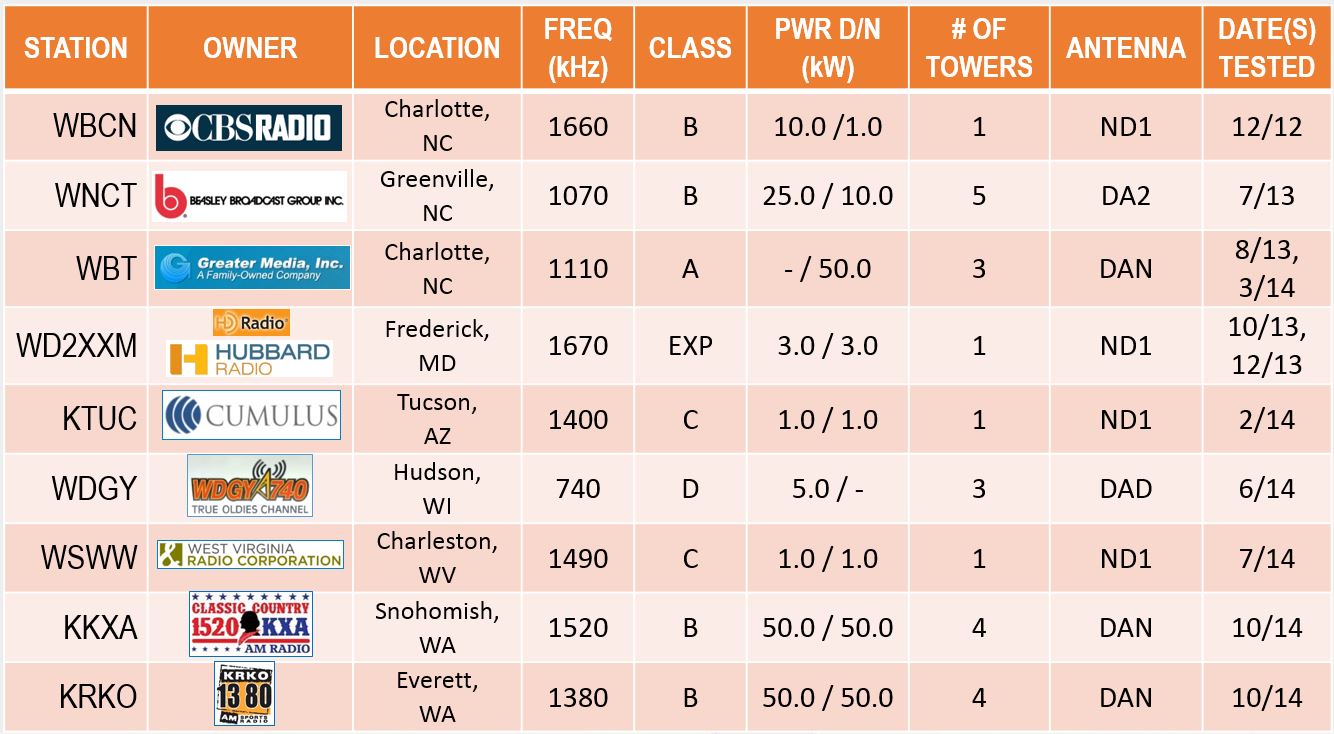 The HD Radio in-band/on-channel (IBOC) digital radio system, developed by iBiquity Digital Corporation (now Xperi) and standardized by the National Radio Systems Committee (NRSC), can operate in two fundamental modes: hybrid and all-digital. The hybrid mode, which utilizes a radio signal consisting of the legacy analog signal (AM or FM), was authorized for use in the U.S. by the FCC in 2002, and at present over 2,200 radio stations are broadcasting a hybrid HD Radio signal.

During the initial adoption of the HD Radio system, it was contemplated that the transition to digital radio using this system could encompass two phases: the introduction of digital radio services using the hybrid signal (spectrum shown in upper figure), which would continue to allow for reception of the main channel audio portion of the signal on legacy analog receivers, and an eventual transition from the hybrid signal to the all-digital signal (spectrum shown in lower figure), when there was sufficient penetration of HD Radio receivers in the marketplace so as not to disenfranchise listeners (on the order of 85% of listeners).

Use of the all-digital signal would be advantageous because of its increased payload capacity and robustness, however, these advantages must be traded off against the loss of reception by analog receivers, which are numerous.

Since the initial adoption of HD Radio, one major FCC rule change, allowing AM stations to operate FM translators (so-called “cross-service” translators), has changed the landscape for the possible transition to all-digital AM.  A perfect example of this is Hubbard Broadcasting station WWFD (820 kHz, Frederick, MD) which has been operating all-digital AM full time on an experimental basis.  WWFD also operates an FM translator covering its city of license, so while they are building a new, digital radio audience using their AM signal, they are continuing to serve their analog listeners with their FM translator.