The North Carolina ABC-owned station used AR in advance of Hurricane Florence to illustrate the threat of storm surge. 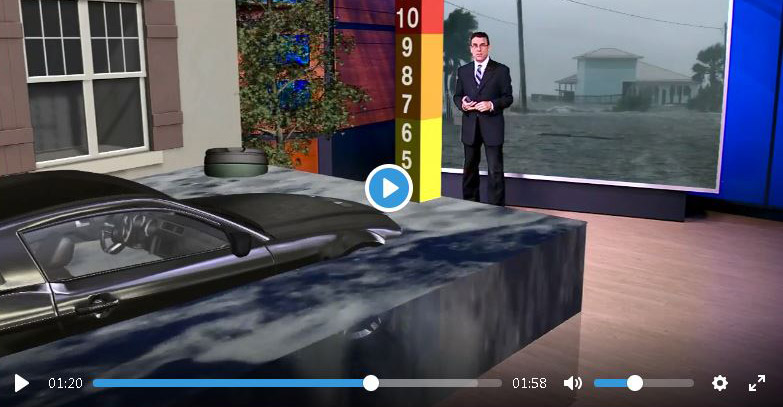 WTVD used AR to emphasize how dangerous storm surge can be

For all the talk of hurricane-related danger, WTVD, the ABC O&O in Durham, North Carolina, magnified the message using augmented reality (AR) before Hurricane Florence made landfall in September 2018.

Illustrating the potential peril of storm surge, coastal communities’ greatest threat to life and property from a hurricane, WTVD meteorologist Steve Stewart leveraged AR (which basically puts something virtual in a real-world setting) specifically to underscore the damage that can be done by a sudden rise in ocean water levels.

Stewart showed how different grades of storm surges, which can lift water levels from roughly four to 18 feet depending on the magnitude of a hurricane, can lead to cars being submerged in water and eventually swept away.

He created the scene using a Weather Company (formerly WSI) computer and the camera was fitted with a special lens.

While the report certainly showcased WTVD’s newfound capabilities, it also embodies the way weathercasters can use next-level technology to drive important safety messages home with impact.

“We can warn viewers about the consequences of weather events but being able to visually demonstrate potential outcomes to them is much more effective,” said WTVD’s general manager Caroline Welch. “Augmented reality lets us do that in a way that really grabs the viewer and brings the example to life. The possible uses for AR are endless.”