The PILOT Innovation Challenge sought ideas for unconventional ways broadcasters and local media could serve communities. Zagrut is a news reader app that critiques the existing system of news propagation and consumption and makes the user aware of bias, and took third place.

“Zagrut” means beware in Mario Dcunha’s native Indian language of Konkani. It was the word that summed up his frustration after the 2018 Facebook-Cambridge Analytica Data Scandal that exposed millions of users’ data.

“When I was going through the news from various sources it began to frustrate me,” Mario said. “It became a giant mess of a web of the nexus between politicians, online news media and the money and the scam and data industries.” 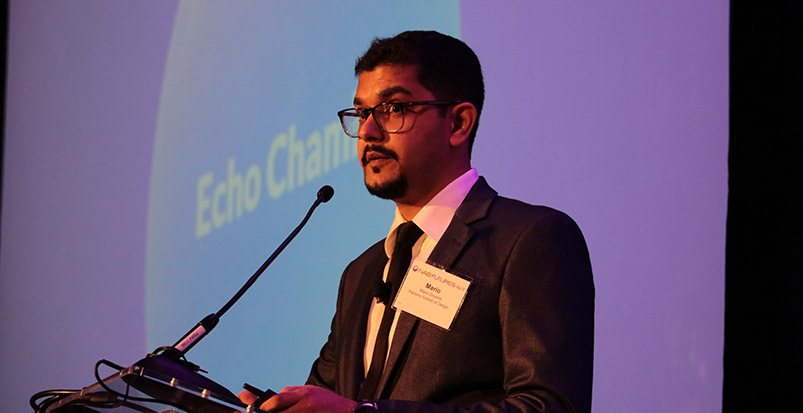 Using his background in design and design procedure, Mario started his innovation path with a free writing session. He started with his feeling of frustration and began to write. He didn’t pick up his hand until he had completed three or four pages full of stream-of-conscious thoughts and feelings.

“I did not know what to focus on and I needed to figure out how I would solve the problem as a designer,” Mario said. “I took out iterating points and iterating themes. That lead me to media bias and how it was a huge contributor to the issues that frustrated me.”

With the problem outlined, Mario set out to find the solution. Through the NAB Pilot Challenge he was able to even further focus his solution.

“Working toward NAB Futures has further helped me hone in on solving the issue of the echo chamber,” Mario said. “The next step is to use my experience at NAB Futures and get the technology to put the solution into action.”

Zagrut is a news reader app that critiques the existing system of news propagation and consumption and makes the user aware of the bias in this environment, according to Mario. It helps to bring awareness of the bias in different media outlets to the user in hopes to help guide them closer to the truth.

If the problem of media bias remained in the media, it would not have worried Mario as much. His frustration stemmed from the problem seeping into other domains like democratic procedure, lobbying by the tech industry, lawmaking and public policy. This slow creep caused Mario to take action and create Zagrut.

“If we just let [media bias] go then it is not going to remain a problem in itself. It will snowball into something much larger,” Mario said. “It is important that we address this as much as we can because it is expanding into fields we never imagined.”